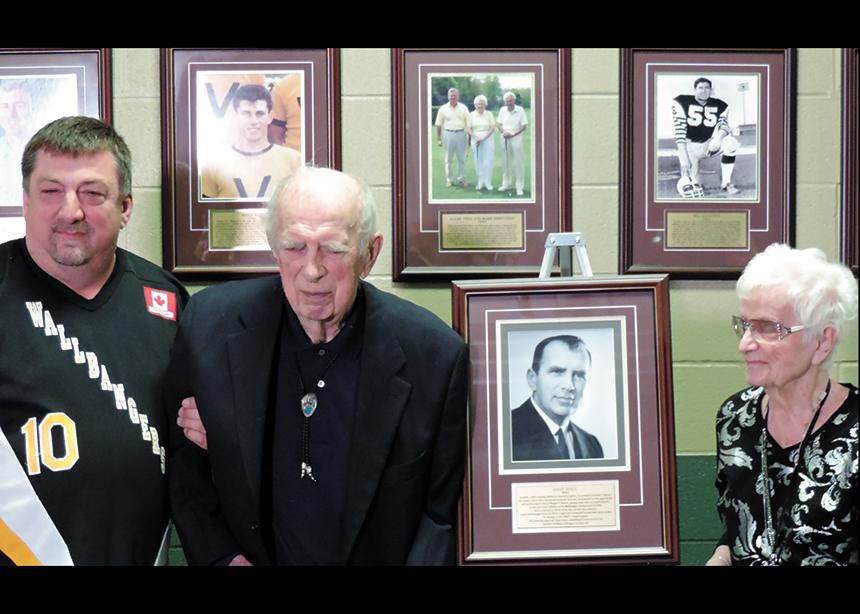 Son Richard, left is pictured with his parents Dave and Helen Wall at the awards ceremony in Virgil in August. (Photo by Randy Klaassen)

Dave Wall, who was an active member of Grace Mennonite Church in St. Catharines and an ardent supporter of Silver Lake Mennonite Camp fundraising dinners, was honoured by his local community for the many roles he played there and for his enduring legacy.

On Aug. 23, Wall was inducted into the Sports Wall of Fame in Virgil, where he was lauded for being instrumental in fundraising for building the two arenas in town. He was one of the original members of the Wallbangers Hockey team that is still playing today. He sponsored many sports teams in the area and was directly involved in the slo-pitch league.

In 2018, Wall’s memoirs were compiled into a printed book, Wall’s of Virgil: Dave Wall’s Story, to commemorate his 90th birthday the year before.

Born in Manitoba in 1927, Wall moved to Virgil with his family in 1936. His father died when he was 12, and, with the insurance money, his mother bought a small fruit farm and had a small house built. She managed to send her son to Rosthern Junior College in Saskatchewan for several years of high school, as well as a year at Niagara Christian College in Ontario.

Upon finishing high school, he worked in the car industry, at a local canning factory and as a truck driver, before going into the electrical business. He later opened a home appliance store in Virgil in 1956, which developed into a furniture store that he owned for the next 60 years, until it closed in 2016.

In 1950, Wall was baptized at Niagara United Mennonite Church in Niagara-on-the-Lake. He and his family became active at Grace Mennonite Church in St. Catharines, when it opened its doors in 1956. He was a Sunday school teacher, youth leader and church board chair. He organized the fundraising for the addition of a gym to the church building. He also initiated the fundraising dinners to help support Silver Lake Mennonite Camp, the last of which was held in 2011 on the 50th anniversary of the camp.

A year of major changes occurred in 2016. In March, the Walls sold their home in Florida; in April, the furniture business was sold; and in May, their house burned down. This event prompted their move into Pleasant Manor Retirement Village in Niagara-on-the-Lake, where they currently reside.

Although his health is failing, Wall says, “We are here where we belong.” 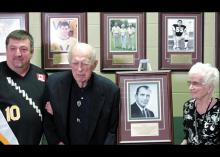 Son Richard, left is pictured with his parents Dave and Helen Wall at the awards ceremony in Virgil in August. (Photo by Randy Klaassen)

I sold Dave Wall furniture for years. He always treated me great, he even gave my family and I the use of his beautiful Muskoka Cottage each summer. Unforgettable guy. Congratulations, Dave! Here’s to many more years!