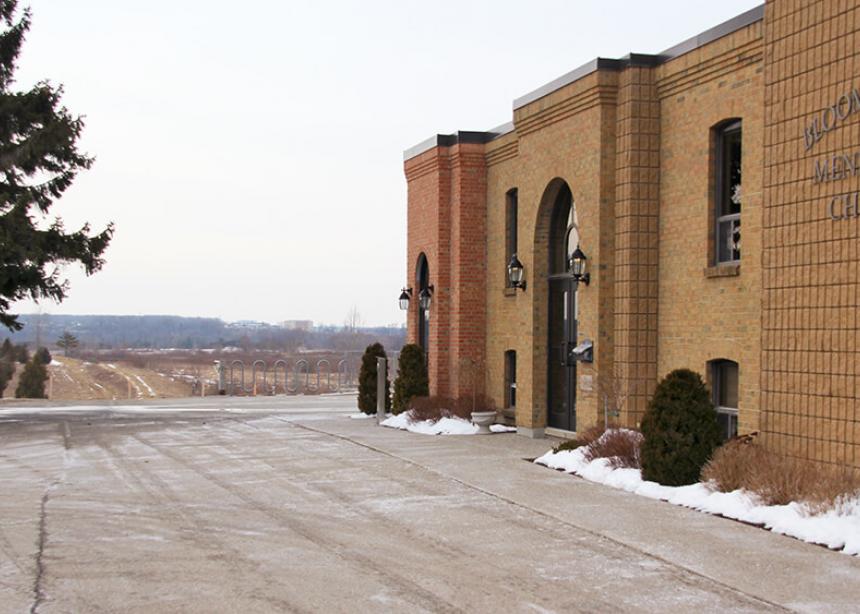 Jules Koostachin began her journey to dance in a jingle dress as an act of intergenerational healing, thinking that she would complete it in a year. Filmmaker James Buffin decided to follow her on this journey with his camera, he says, “entirely out of friendship.” Little did either of them know it would take six years before she danced, having moved through many steps of learning and healing.

When Koostachin was born, her mother was relieved at her daughter’s light skin and red hair, feeling this would help her to fit into white culture and face less prejudice, a poignant example of internalized racism that keeps many indigenous Canadians trapped in depression and self-hatred. Koostachin’s journey led her not only to dance at a powwow at Eagle Lake in northwestern Ontario, in the area where the jingle dance originated, but back to school and back into the arts.

Buffin’s film Jingle Dress was shown as part of a “Dancing towards reconciliation” weekend at Bloomingdale Mennonite Church recently. He told those gathered that when he began the project he had known nothing about the Indian Residential School System or the racism behind it. Through its making he was educated in systemic racism and cultural genocide, and found healing in his own fractured spirituality.

Bloomingdale Mennonite Church was founded in homes in the early 1800s on Snyder’s Flats, about a half-kilometre east of the Grand River, placing it well within the Haldimand Tract given to the Six Nations by the British Crown in 1784. This tract was made up of all the land within 9.6 kilometres on either side of the Grand River from its mouth to its source.

It was with this knowledge that Pastor Barb Smith Morrison contacted Mennonite Central Committee (MCC) Ontario, to see if her congregation could sponsor an event to learn more about indigenous/settler reconciliation in light of Canada’s Truth and Reconciliation Commission report that was released last year.

The event was held over two evenings, at which elders Esther and Andrew Wesley told stories that comprise part of the teachings that indigenous children receive to learn to honour the land as sacred and use its resources the way the Creator wishes. Because so many children missed these teachings due to their time at residential schools, Andrew, an Anglican priest, confessed that many indigenous people have failed to use the land well. He returned to his people after many years in the residential school system and asked the elders to teach him the stories he had missed.

On the second evening, a potlatch feast was held to celebrate renewed relationships between indigenous and settler peoples. This was followed be a viewing of Jingle Dress, with Koostachin available from B.C. via Skype, and Buffin and dressmaker E.J. Kwandibens  from Toronto at the screening. Kwandibens estimates that he has made in excess of 350 jingle dresses to this time.

A key lesson for the participants who numbered more than 100 was the idea of being an ally to indigenous people. Instead of speaking for them and telling their sto-ries, dis-empowering them even while attempting to help, settlers are asked to make room for indigenous people to tell their own stories in their own way, just as Koostachin was able to do with the help of her ally Buffin.