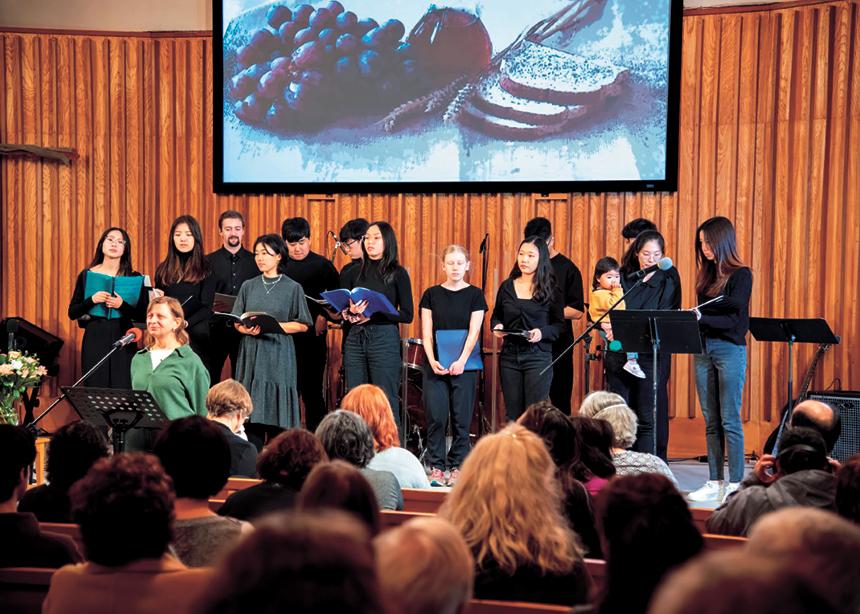 The Lucerna Community Choir, with singers from Point Grey and Chinatown Peace congregations, sings at the “Cross Culture” service in Vancouver. (Photo by Walter Toews)

The speaker for the morning was Tim Kuepfer, pastor at Chinatown Peace Church, whose message, entitled “I have a dream,” was based on Luke 6:27-36. He encouraged listeners to live out their Anabaptist peace witness by tackling issues of affordable housing for young people, newcomers, Indigenous people and low income residents.

The Lucerna Community Choir, consisting of members from Point Grey and Chinatown Peace, provided special music, and Point Grey organized and led communion. The event concluded with a pizza lunch.

Combining worship is nothing new for Vancouver churches. “We started having services six times a year and called them ‘Cross Culture: 3 languages = 1 church,’” says Barkowsky.

Jorge Hoajaca is pastor at both Sherbrooke and First United Spanish Mennonite. He explains: “We strongly believe that if the community around the church is multicultural, multilingual and diverse, the church needs to become like that without losing the essence of our faith.”

Last fall the Sherboroke group decided to invite the other English churches in Vancouver to join for worship in January. This was the first time all six congregations had met together. Organizers provided translation for all songs in three languages, as well as having lyrics for the languages on screen so no one would be left out.

“On January 8. the joy of all who attended was unmeasurable,” says  Hoajaca. “We will continue pursuing the vision of one day to be one congregation with Sherbrooke Mennonite, FUSMC and the Vietnamese as the core of the new church.”

Plans are for FUSMC, Sherbrooke and the Vietnamese congregations to continue to meet together at New Years, Easter, Pentecost, in September, Thanksgiving and Advent. There will be another MC B.C. multi-congregation worship service at Peace Mennonite Church in Richmond on Feb. 26, the day after the MC B.C. annual meeting, with Doug Klassen and Jeanette Hanson of Mennonite Church Canada speaking. 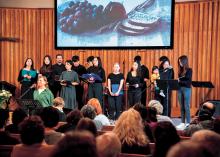 The Lucerna Community Choir, with singers from Point Grey and Chinatown Peace congregations, sings at the “Cross Culture” service in Vancouver. (Photo by Walter Toews)