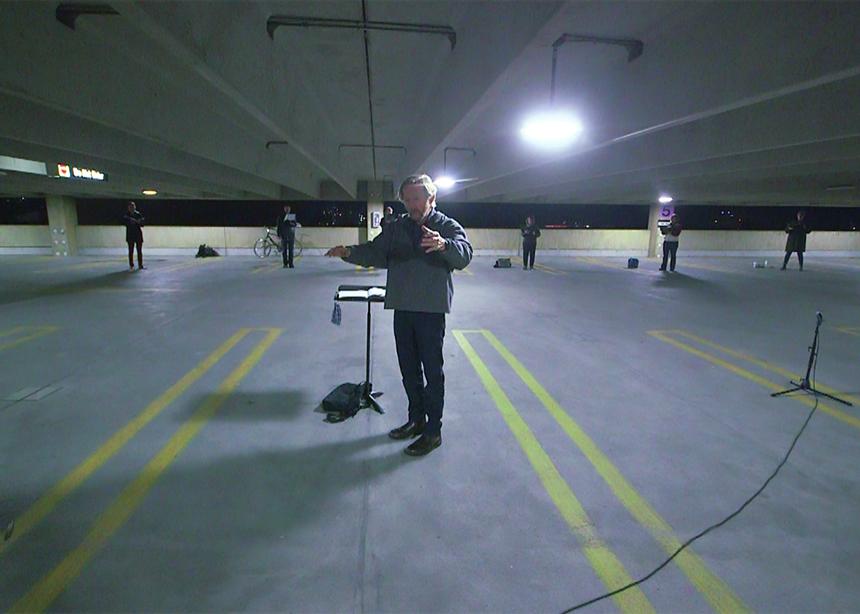 Leonard Enns conducts a DaCapo Chamber Choir rehearsal in a Waterloo parkade during COVID-19 restrictions. Enns won a recent composition competition with a piece called “A Little More Time,” which he wrote as part of a personal challenge to write a short choral work each week during the early part of the pandemic. (Chestnut Hall Music screenshot)

When the novel coronavirus pandemic broke out last spring, shutting down so many activities, Leonard Enns gave himself a challenge: to write a short choral work of three to four minutes in length each week. It is a commitment he kept up from April to June 2020.

“A Little More Time,” the last of his eight “Covid compositions,” recently won the 2020 grand prize in the Edmonton-based Chronos Vocal Ensemble’s fourth annual composition competition. Through a blind adjudication process the jury selected Enns’s work out of 22 entries from five provinces.

Enns, professor emeritus at Conrad Grebel University College in Waterloo, and founder and director of the DaCapo Chamber Choir based in Waterloo, says his composition challenge during the pandemic was a way to “stay sane,” and it gave him a “reason to get up in the morning.”

He says that, over the years, he collected texts that might be good for a choral setting, adding that, during the pandemic, he had time to begin “working through that list.” He was drawn to the poetry of Rainer Maria Rilke and, in particular, “Studenbuch,” a “compelling text” on which he based the winning composition, “A Little More Time.” Rilke’s text speaks to environmental issues directly. It is a theme to which Enns intends to dedicate the next season of DaCapo’s music making, whenever that can happen.

The criteria for the competition was to compose a piece that has both immediate and long-term relevance. Enns says his piece speaks to the “immediate concern of the environment and our abuse of it,” as well as the “potentially devastating long-term impact” of that abuse.

In his notes on the piece, Enns says that Rilke’s text “speaks of the very little time that is left for us to ‘love all things . . . until they blossom and are worthy of your name.’” As well it speaks of “the walls and barriers we have set up . . . that block the image of the divine in our world.” Rilke shows a “sacred respect for nature,” addressing the divine as a “darkening deep” (Du dunkelnder Grund), in which the dark is seen as a positive, revealing reality that is always “becoming.” Enns adds,“We owe nature our care and respect, not only for selfish existential reasons, but also for sacred reasons.”

Enns entered “A Little More Time,” written for an unaccompanied mixed choir, at the last minute, and he says he was thrilled to be declared the winner because he highly respects the musicians who formed the jury: “I hope I have created an effective musical ‘reading’ of the text, and that the music might give the words a particular impact.” He says that “theologizing sometimes limits the spirit [but] music can open up the way we hear or experience something you can’t always put into words.”

Enns describes his music as tonal and text oriented. He says, “The major generating energizer is the text . . . my music tries to open the text.” While he likes melodies, he says, “the stuff I write is not easy.” The music “is not all major triads.”

To keep his DaCapo Chamber Choir reading music and singing during the pandemic, Enns resorted to meeting with the group in a Waterloo parking garage when the weather co-operated. So far, this “parkade practice,” as he calls it, is the only opportunity his choir has had to sing through his award-winning piece, he says.

The choir has recorded several other pieces in the parkade that he dubbed the “concrete cathedral.” The recordings can be found on the choir’s website. Chestnut Hall Music provided equipment and engineering.

In reflecting on the impact of the pandemic on music-making, Enns says that COVID-19 has presented an “existential challenge” to performing musicians who are faced with the question, “How long can you keep the intention and your craft?”

Recording and sharing music online is helping to keep musicians and churches going during the pandemic, Enns says, but “it doesn’t satisfy me.” He calls congregational singing a “huge binding exercise. . . . Music can open a door to the divine, and also create an amazing bond between people.” He says that “music is a way of expressing ideas” that is “so central” for church and theology. It is “not just to listen to as a distraction.” 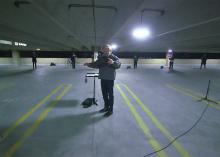 Leonard Enns conducts a DaCapo Chamber Choir rehearsal in a Waterloo parkade during COVID-19 restrictions. Enns won a recent composition competition with a piece called “A Little More Time,” which he wrote as part of a personal challenge to write a short choral work each week during the early part of the pandemic. (Chestnut Hall Music screenshot)