Covenant and law: A matter of relationship 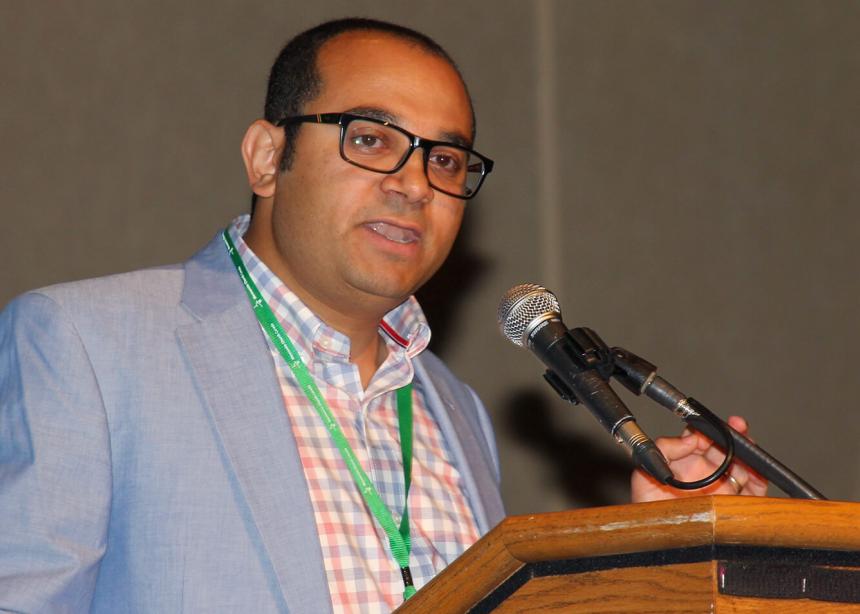 Over two days at Mennonite Church Canada’s Assembly 2016, “God~Faith~People,” keynote speaker Safwat Marzouk addressed the topic of covenant that was central to the theme text, Jeremiah 31:33.

During the July 7 worship service, he explained that covenant is an agreement of mutual obligation, in which each party has the ability and responsibility to uphold his or her side.

The assistant professor of Old Testament/Hebrew Bible at Anabaptist Mennonite Biblical Seminary in Elkhart, Ind., said the idea of covenants and law may make people feel uncomfortable and uncertain about their ability to uphold them. He suggested that they might have an easier time of it if they looked at the intertwining threads of God’s law and the story of God’s people together.

Marzouk said that God’s faithfulness and love can be seen through the diversity of God’s laws, and how these laws were formulated and reformulated over a long period of time. They moved from conditional laws, where people were required to comply or suffer the consequences, to unconditional laws, which, instead of being inscribed on a tablet of stone, God chose to write on the hearts of God’s people.

“What does it mean for us as a discerning church to think of God and the laws as being framed in a relational way, rather than demanding [our] way? God is engaging and responding to human needs,” he said.

On the following day, Marzouk told delegates at a plenary session that the Bible uses the same word for covenant regardless of whether that agreement is between God and God’s people, or between people. It’s the same word used in the covenant between God and Noah, between Abraham and his allies, and between Isaac and the Philistines.

“We walk our spiritual journeys in different ways and different paths, and sometimes our spirituality has a specific accent to it or emphasis that we rely on, and sometimes we need to be challenged by the other voice or the other side of spirituality that is present in the biblical text,” he said, noting that the church is called by the Spirit to cultivate a covenantal community that fosters a just diversity, where differences are received as a gift, not a threat.

Marzouk’s teaching generated considerable interaction on Twitter. Tim Wenger wrote that “Acts 10 invites us to reconsider the boundaries we construct to protect ourselves.” Others were struck by the big picture of Marzouk’s teaching; Michael Pahl simply shared that “@safwatmarzouk is bringin’ it.”