Couple reflects on 30 years of ministry in China 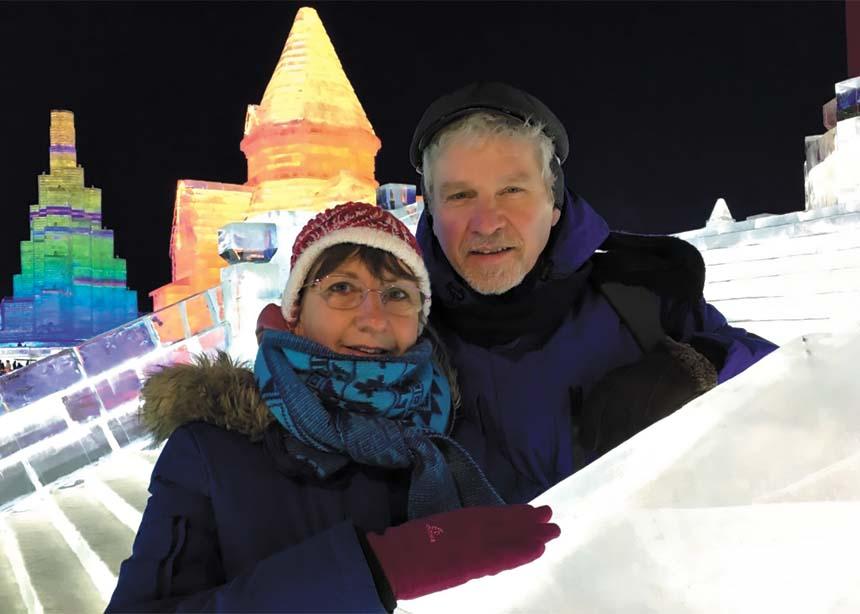 Tobia and George Veith, who recently completed a term of service in China, enjoy the ice festival in Harbin, China, the largest snow and ice sculpture festival in the world. (Photo courtesy of Tobia Veith)

Reflecting on three decades of service in Asia, Mennonite Church Canada Witness workers Tobia and George Veith say that, while their time of service has at times been hard, it has also been one of the richest blessings of their lives.

The Veiths returned to Canada last fall after serving as mission workers since 1991, first with the former General Conference Mennonite Commission on Overseas Mission (COM) and later with MC Canada Witness. Since last October, they have been speaking about their experiences to church audiences throughout Canada, either in person or virtually.

Involved in InterVarsity Christian Fellowship during their years at the University of Saskatchewan, the pair felt called to serve with Chinese people and asked COM where the greatest need was in Asia.

“There was already a Mennonite church in Hong Kong inviting connections,” says Tobia. “We wanted to connect and exchange cross-culturally in terms of our Anabaptist faith.”

At a Jan. 10 online event with MC B.C., the Veiths shared about the many workers and leaders who enriched their lives and the life of the churches in the three places they served: Macau, Hong Kong and Harbin, China. Their first assignment was teaching in Hong Kong, and later they were called to minister in Macau, a former Portuguese colony, now a special administrative region of China. Macau is the top destination for gambling in the world, bringing in seven times the profits of Las Vegas, which presents unique challenges for the church in the region.

“During our many years in Macau we felt most encouraged and blessed to see individuals come to faith, be baptized and grow in their faith, and begin to become involved in the life of the church, taking on leadership in serving with their gifts,” Tobia says.

When the Veiths first arrived in Macau, there was no Mennonite church, so they had to invest time in developing relationships with other pastors and denominations. The other denominational leaders welcomed them, saying they could use a Mennonite presence there.

“By the time we left, there was a small congregation and two ordained pastors,” says George. “It’s an Anabaptist church committed to Anabaptist core values.”

The gambling industry is so prevalent, explains George, that it has effects on everyday life. Some of these include young people choosing to work in casinos instead of pursuing post-secondary education; and spouses working different shifts in casinos, disrupting family life. Real estate prices and cost of living have jumped.

“The church finds it more difficult to do ministry,” says George. “There’s stress on people to make a go of things.”

The last six years, the Veiths lived in Harbin at the invitation of believers at one of the local churches. They took part in the life of the church with preaching, leading Bible studies and equipping leaders, while also teaching English at a university there.

The Veiths say that what they will miss most about China are the relationships and the food.

“When Chinese people get together for a meal, it’s a whole evening event with good discussions,” says Tobia. “One of the saddest things about leaving is not knowing when we’ll be able to go back for a visit.”

“Coming back here, we notice it is not the same place as 30 years ago,” says George. While they were overseas, the North American churches’ attitudes towards cross-cultural ministry changed a lot. “Given the discussion about colonialism, residential schools and the churches reacting cross-culturally, we need to examine what happened in our [own] history.”

Tobia adds: “Perhaps a lot of initiative in cross-cultural ministry [in the past] was westerners going to other countries. More often now, MC Canada Witness has been responding to invitations. It’s much more of an invitational partnership.”

The Veiths both feel that missions today involve a way of relating that is more mutual than in years past. Their style of relating was to listen and learn in working alongside Chinese believers.

“Colonialism is not the way to do missions,” says George. “It’s a two-way relationship. Mennonites may have engaged in that discussion longer than other groups have.”

The situation for the church in China is tenuous, say the Veiths. Registered churches in China are allowed to meet but, while house churches such as the Mennonite ones are not officially permitted, the government does not pursue the matter. Children are not permitted to attend church, but church members are finding other creative ways to relate to children.

In their online presence, the Veiths refer to church members and leaders by their initials only, to protect their identity.

When the Veiths left Canada in 1991, they were a young couple with a small baby. Now they are the parents of three adult children and are readjusting to life in Canada. They are settling in Winnipeg, where their children live. George plans to continue writing a curriculum for a leader training course in China that he began last year, and Tobia is hoping to teach English as a second language, and possibly substitute teach. She also hopes to find volunteer opportunities.

The Veiths continue to have a vision for the believers in China and encourage Canadian Christians to pray for the church there.

“We hope the church continues to grow and we pray that they will find younger leaders,” says George. He believes it is important to pray “that Christians would find creative ways to share their faith in a society that’s becoming more and more interested in becoming affluent. In a way, they’re facing the same realities we’re facing here.”

Tobia concludes: “We’ve been so blessed to be in partnership with people, our colleagues in Canada but, by and large, most of our colleagues have been Chinese brothers and sisters. It’s been God’s grace that sent us and kept us going. God did the much bigger part.”

This article appears in the Feb. 21, 2022 print issue, with the headline “God’s grace kept them going.” Do you have a story idea about Mennonites in B.C.? Send it to Amy Rinner Waddell at bc@canadianmennonite.org. 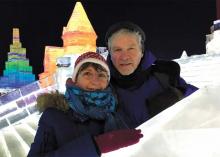 Tobia and George Veith, who recently completed a term of service in China, enjoy the ice festival in Harbin, China, the largest snow and ice sculpture festival in the world. (Photo courtesy of Tobia Veith)