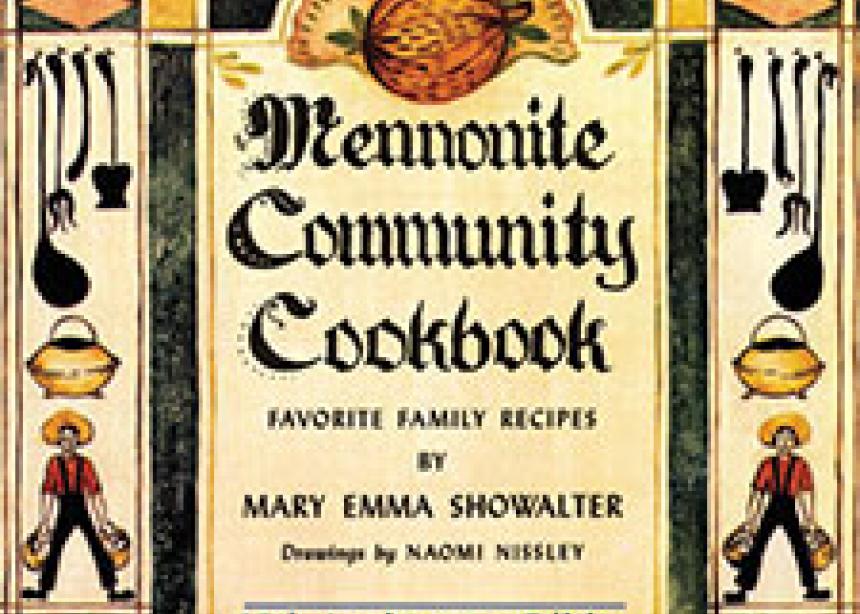 In the 1940s, Mary Emma Showalter began a cookbook project, collecting old Mennonite recipes that were handwritten in notebooks because she feared that soon the notebooks would be discarded. As Mennonites began moving beyond their home communities during the Second World War, they were learning to cook new foods and were less apt to use the old recipes learned from home. She also noticed that Mennonite communities in various states and provinces had similarities, so she assumed they had common roots and were old favourites.

By the mid-20th century, Mennonites were indeed learning new recipes and not necessarily keeping their mother’s old handwritten notebooks. I remember my mother having an old notebook without a cover in her recipe drawer, but she rarely used it. The old familiar things she could whip up without a recipe, while other dishes usually came from printed cookbooks. Like all cooks, Mennonites have always borrowed recipes from their friends and neighbours. As we’ve come into contact with more cultures, the scope of Mennonite food has broadened.

The recipes in the Mennonite Community Cookbook are primarily from Swiss Mennonite communities. There are a few recipes from the Russian Mennonite tradition, but they are few and far between. While there are 112 recipes from Canadian contributors, most are from Amish and Swiss Mennonite communities in Ontario (Kitchener-Waterloo, Markham, Wellesley, St. Jacobs), with a significant number from Tofield, Alta. There are a total of three recipes from Altona, Man., and none at all from the rest of Manitoba, Saskatchewan or B.C.

My older sister recently remarked that when she was young she didn’t realize there was such a thing as a recipe for main course dishes. In her experience, recipes were for desserts like cookies, cakes or pies. Her experience is reflected in the Mennonite Community Cookbook, as there are 65 pages of recipes for desserts, another 48 pages of cake recipes, 38 pages of cookies, and 30 pages of pies and tarts. That makes a total of 181 pages, compared to 132 pages for all vegetables, salads, meat, soup, egg and cheese dishes. I don’t think traditional Mennonites ate more desserts than vegetables and meat, they just had more written recipes for sweets.

It’s interesting to note that there are many recipes for corn, beans, cabbage and carrots, but none for broccoli or zucchini. Today it’s hard to imagine Mennonites not eating zucchini! By the time the More-With-Less Cookbook came along in 1976, things had changed.

Showalter acknowledges that some of the recipes are newer (to the late 1940s) but it’s not clear exactly which those are. Some recipes indicate that they are very old, but 65 years later it would be nice to know exactly which recipes she considered to be old favourites.

Compared to Russian Mennonites, Swiss Mennonites have few classic recipes that remind them of home and grandma. This book has recipes for things such as cook cheese, egg cheese, shoo-fly pie and rivel soup, but the grandmas I know don’t make them—except maybe egg cheese, which is still delicious with real maple syrup.

In my experience, old Swiss Mennonite recipes in Ontario used more maple syrup than can be found in these recipes. Especially during the 1930s, when farm families couldn’t afford to buy sugar, they used a lot of maple syrup and maple sugar. In the Pennsylvania German dialect, the word for maple syrup is the same as molasses, so I wonder if some of the contributors wrote molasses, but intended the use of maple syrup.

This popular cookbook has gone through 52 printings in 65 years. This edition is similar to the original except for the addition of a few extra pages. It is available in comb binding or e-book versions. The comb binding allows the pages to stay open, but there is not much extra space, and I found it challenging to turn the pages one at a time.

Reading these recipes was very interesting, especially since they were collected so many years ago. This cookbook is a historical document that can show how Mennonite cooking has changed over the years.