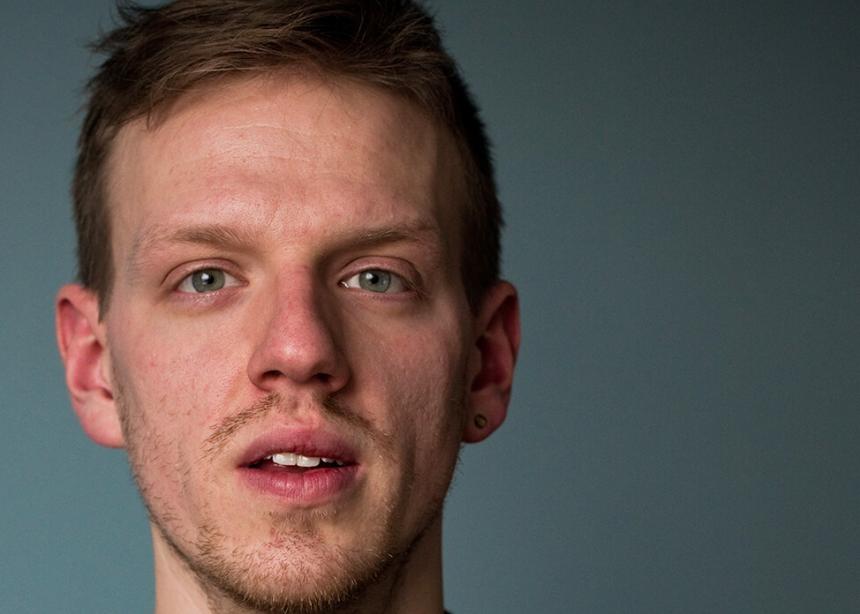 Entitled Yellow Bellies, the play is a historical drama that highlights the experiences and public response to Mennonite COs during the Second World War. The episodic tale takes audiences across Canada, featuring verbatim interviews, fictionalized scenes and live music.

Fred Martin, chair of the company’s board of directors, suggested the topic. Artistic director Johnny Wideman says the suggestion piqued his interest because the company explored similar territory in one of its earlier works: Gadfly: Sam Steiner Dodges the Draft.

“It’s a thing that we’ve looked at before in other ways, in terms of pacifism or living out one’s beliefs when it seems to contradict the status quo or what society says you’re supposed to do in a time of war,” says Wideman, 28. “It’s a theme we’re interested in.”

This year marks the 75th anniversary of CO camps in Canada, giving the topic an interesting tie-in to today, he adds.

Wideman co-wrote the script with his fellow Theatre of the Beat member, Rebecca Steiner, 26. To research the play, Wideman spent time at the Mennonite Archives of Ontario at Conrad Grebel University College in Waterloo. Steiner, who lives in Winnipeg, explored the Mennonite Heritage Centre Archives there, enlisting the help of three Canadian Mennonite University (CMU) students to help her.

The students researched the stories of COs during the Second World War by reading archived material and conducting interviews to gather information about the time period. Steiner says the play would not be what it is were it not for the students’ work.

“Sometimes when you research on your own you have a certain lens,” she says. “Having different perspectives added to our research.”

Kayla Drudge, one of the CMU students, focussed on music in her research for the play. Her work involved interviewing former Canadian Mennonite Bible College music professor George Wiebe, as well as writing a piece of music that incorporates “I’ll Go Where You Want Me To Go,” a hymn some COs sang when they were homesick.

Drudge says doing research for the play gave her a greater appreciation for what COs went through.

“Reading the actual letters that people wrote, it became so much more real and felt like it connected in a way that it didn’t through second-hand stories,” the 20-year-old says. “That was cool.”

Wideman and Steiner began writing the play in earnest this past January. In April, Wideman travelled to Winnipeg so that he and Steiner could spend a week workshopping the play. That week culminated in a staged reading at the Archives in front of a crowd of more than 45 people.

Rehearsals for the play begin this month in southern Ontario, with Steiner and University of Waterloo drama professor Andrew Houston co-directing. Yellow Bellies will debut on June 11 and 12, 2016, at the Global Mennonite Peacebuilding Conference and Festival in Waterloo. Afterwards the company hopes to tour the production across Canada.

Since its inception in 2011, Theatre of the Beat has aimed to create thought-provoking theatre to raise awareness of social justice issues. While the company has performed more than 200 shows in theatres, festivals, churches, universities and prisons throughout Canada and parts of the U.S., its primary audience has often been the Mennonite church.

Wideman did not grow up in a Mennonite church, but in the past few years has attended, and become involved at, Community Mennonite Church in Stouffville. He says he enjoys writing and performing for a community that has become his home and that he cares about a great deal.

“To know that you’re doing something that is relevant for a very specific group of people means you can cater it more specifically to that group of people, to provoke conversation [and] to hopefully instigate change,” Wideman says. “In some ways, I feel I’m lucky to have such a defined audience.”

In addition to engaging the wider Mennonite community, the company’s members have been given the opportunity to cultivate friendship through artistic expression.

“It’s really special when you find a group of people you can be creative with, and I’ve found that with Theatre of the Beat,” Steiner says. “It’s a really neat team of artist-activist types.”

For this and other Theatre of the Beat productions, visit theatreofthebeat.ca. 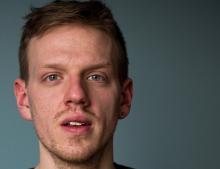 Does this theatre and its play writers sell copies of their original plays? Royalties, etc. are involved. Not all of us live close enough to see these in person.

You will need to communicate directly with them. See contact information at http://theatreofthebeat.ca.