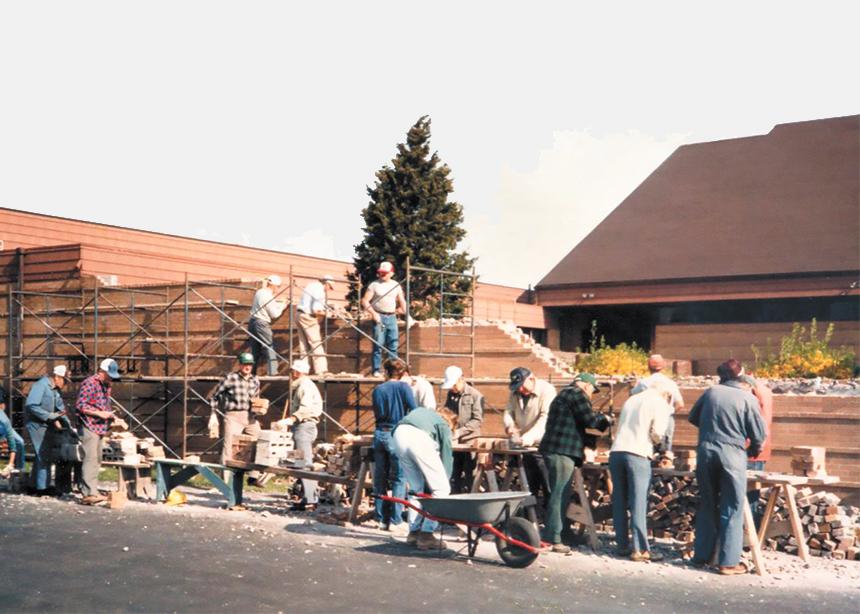 As with most celebrations during this pandemic, it was a quiet 75th anniversary celebration for St. Catharines United Mennonite Church on Nov. 1. In order to limit social contact, the Sunday services alternate between families and seniors, and this Sunday was a seniors Sunday service. About 86 people attended.

The service began with a video of a slide collection of the church through the years, including baptisms and dedications; service groups for girls, boys, men and women; music groups and choirs; outreach work in the community and further afield; church staff and volunteers; and socializing around food and the annual bazaar.

The first informal worship service was held in July 1942 in a rented hall. As more families came to the area, it was decided to build a church building on Carlton Street in St. Catharines.

In October 1945, the congregation elected a minister, adopted the official name and accepted a constitution. This date was used as the official starting date. As the church continued to grow, a larger building was constructed on Garnet Street in 1949. The final congregational move was to its present location on Linwell Road in 1967.

The language of worship was exclusively German in 1945, and moved toward separate English and German services in 1988. Until the pandemic, there were two worship services most Sundays, one in German and the other in English. With the challenges of the pandemic, the congregation has worshipped in English.

After the opening song and welcome, youth worker Taya Himes read the personal reminiscences of several members, sharing their highlights of the early days of coming to church.

Reverend Henry H. Epp, minister of the church at three separate intervals, had been interviewed in 2014, and part of the interview was shown. When he was asked what was most important, he said, “To keep the faith.”

After a celebratory litany, Pastor Nick Schuurman highlighted the work of the Maria Martha Verein ladies aid society, whose quilts hung on the church wall during the service. Although the society was also celebrating 75 years of service, it was announced that the group was disbanding. (See below.)

Taya Himes acknowledged the giving of Bibles to three Grade 4 students, a tradition of the church.

Randy Klaassen, the church’s associate pastor, spoke on the theme “We’re only passing through,” based on I Peter1:17-23. He reflected on the church’s official opening just after the Second World War had ended. It was a time of many changes in the world. Locally, some early members had been in the area for some time, while others were just leaving Europe and coming to Canada. Still others came from South America in the following years. Young and old were part of these migrations. Klaassen emphasized that within these diverse groups, “all were seeking healing and hope in the name of Jesus Christ.”

Coming as this service did during a pandemic and a climate crisis, Klaassen suggested little acts of behaviour that people can change, for the sake of others, because of Jesus. He listed wearing a mask to protect others, and by using Earth’s resources responsibly by reducing consumption, re-using, re-purposing and recycling, in order not to be wasteful. He urged congregants to speak the truth in love and to build others up; to encourage and support each other so that God’s grace and power are experienced by all; to speak out when they witness injustice; and to recognize one another as equals in the eyes of God.

The service and the 75th celebration concluded with a song and benediction. There was no celebratory communion service or fellowship meal due to pandemic restrictions.

As St. Catharines (Ont.) United Mennonite Church celebrated its 75th anniversary on Nov. 1, the church also said goodbye to the Maria Martha Verein (ladies aid society). Several women got together in each other’s homes in 1945 to sew together, and started using the name Maria Martha in 1947. Over the years, 78 women were part of the group, eventually meeting in the church, as they outgrew their homes. Many activities centred around sewing quilts for Mennonite Central Committee (MCC) to be sent overseas, the New Hamburg Mennonite Relief Sale, the church bazaar and for new babies, as well as making school kits and HIV bags, which were filled by MCC with pyjamas, dresses and shorts, diapers and bandages. In 1970, the group started a “Gaben Tag”—a meeting at which they gave money for missions; throughout the years they collected $182,000, which they gave to local missions and overseas work. The group catered many weddings and served at numerous funerals. The last meeting was held as the COVID-19 pandemic started. Given the age of the remaining members, the social and physical distancing in place, and the continuation of the pandemic, the group will not start up again. 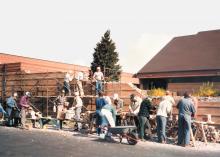 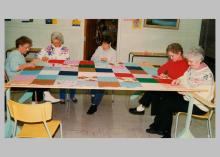