Tulio Pedraza was persecuted from 1949-64 in Colombia 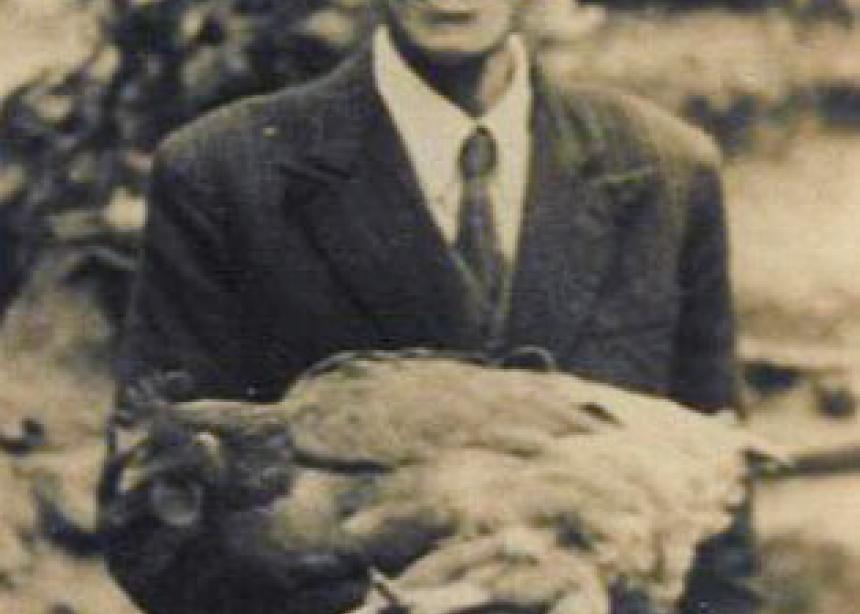 When missionaries arrived in Colombia to establish the country’s first Mennonite congregations, Tulio Pedraza and his wife Sofía became two of their first converts. They were baptized in June 1949.

Only a year earlier, Jorge Eliécer Gaitán, a liberal political candidate, had been assassinated; his death ignited a civil war that would last for 10 years. Because Protestantism was seen as another threat to Colombia’s already strained unity, Colombian Protestants faced significant opposition from municipal authorities, Catholic priests and their own neighbours.

Pedraza was a coffin maker in the small town of Anolaima. He was also blind. This didn’t keep his business from becoming successful enough to provide for his family, since he was the only coffin maker in town. But when the local Catholic priest learned about his baptism, he began making life difficult for the Pedraza family.

First he declared Pedraza’s “Protestant” coffins unfit for Catholics to be buried in. From the pulpit, he told parishioners that he would not officiate any funeral using a coffin purchased from the Mennonite. Business plummeted. Pedraza could only sell coffins to close friends and those ignorant of the priest’s declaration. And even those customers were forced to travel to surrounding towns to hold their funeral services, since the local priest refused to preside.

Then the priest took steps to ensure that even these trickling sales would end. He met a carpenter in another small town. The priest helped procure a house and tools for this carpenter and convinced him to move to Anolaima to begin a rival coffin business. After the arrival of this new competition, Pedraza could no longer pay his suppliers and was forced to close his business.

Although he was unsure of what to do next, Pedraza never abandoned the love and decency he learned by imitating his Lord. Rather than begrudging the rival coffin maker, he reached out to him in friendship. When the blind man’s own business collapsed, he sold this competitor his tools. Through this gesture of benevolence, he helped establish the business of the very man whose presence finished his.

Pedraza and his wife did whatever they could to make ends meet. They tried to start a bakery, a chicken farm and a candle-making business, but with little success. Pedraza’s expertise was in coffin making. None of these new businesses could bring in enough income to provide for the family. He became more discouraged with every failed venture, but his faith gave him the strength to persist.

Their struggles were exacerbated by other acts of persecution. Writing shortly after Pedraza lost his coffin business, local Mennonite missionary Gerald Stucky reported: “The persecution has continued. Tulio’s children were humiliated in the public school because they are Protestants. His property and the lives of his family have been continually menaced. People who were his friends now refuse to speak to him on the street; stores refuse to sell to him; he has become an outcast for the cause of Christ.

“In spite of this, Tulio continues firm in the faith, trusting in the Lord day by day. He holds no evil in his heart towards those who have worked evil against him. He continues to witness to the light he found in Christ. Tulio is a living witness to the power of the gospel to overcome evil with good.”

On more than one occasion, Pedraza’s life was threatened for religious reasons. After one particularly frightening encounter, he and his wife spent the night in the refuge of a Mennonite school in the nearby town of Cachipay.

He died peacefully in 1964. The rival carpenter who had been brought in to destroy the Pedraza business donated a coffin for his burial. Even though the funeral was a Mennonite service, the coffin maker attended, risking his own reputation in the community to honour a man who had shown him such unusual love, born from a deep faith.

The Bearing Witness Stories Project enables Anabaptist communities worldwide to share their stories of costly discipleship in ways that inspire greater faithfulness to Jesus Christ and strengthen the church’s unity. Stories like Pedraza’s from the Bearing Witness website (martyrstories.com) and others from history were published as a book in 2016. This excerpt is from Bearing Witness: Stories of Martyrdom and Costly Discipleship. Copyright © 2016 by Plough Publishing House. Used with permission.