CMU graduate from Kenya wants to make a difference at home 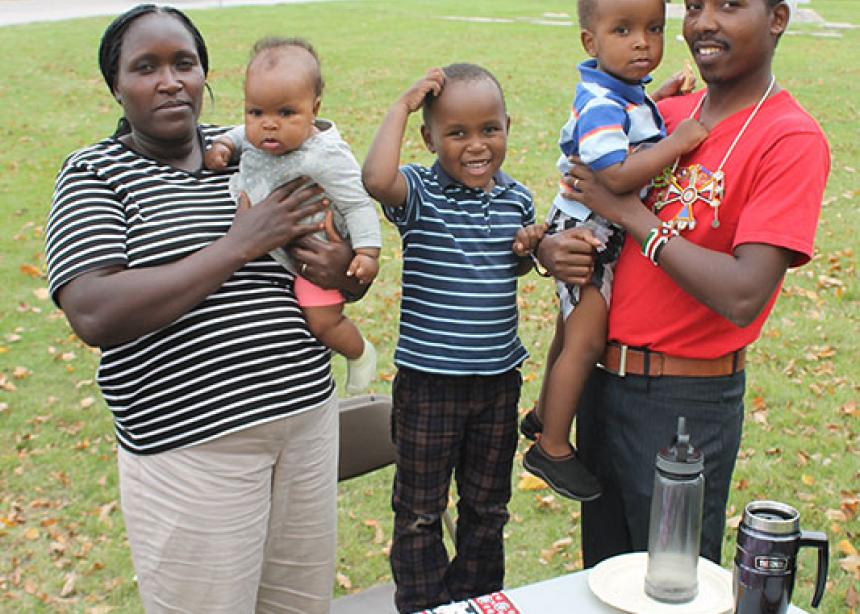 <p>Joseph Kiranto (red t-shirt) stands with his family (from left: Elizabeth, Joy, Joel and Kaleb) at a CMU event in September 2014. The Kirantos moved from Kenya so that Joseph could study at CMU. (Photo courtesy of CMU)</p>

This article is the first in a series called Voice of the Marginalized. These articles were written by students in Canadian Mennonite University’s Journalism: Principles and Practice course. Voice of the Marginalized connected writers with people on the margins of the community. Teacher Carl DeGurse is vice-chair of Canadian Mennonite’s board of directors and an assignment editor at the Winnipeg Free Press.

Making lasting change in your community can seem like an overwhelming task. This hasn’t stopped Joseph Kiranto from dreaming and working to improve the quality of life for people in his home country of Kenya.

Kiranto, 31, who recently graduated from Canadian Mennonite University (CMU) with a degree in peace and conflict transformation studies, has a passion for activism and development. He first came to Canada six years ago with Mennonite Central Committee’s International Volunteer Exchange Program, and returned home inspired and optimistic to bring about positive change in his community. He returned to Canada with his wife, Elizabeth, and son, Joel, in 2012 to pursue peace and theology studies at CMU.

“When I first came to Canada, that’s when I first started dreaming about what I could do,” Kiranto says. “I only dream about those problems when I’m removed from them [in Canada]. I can think now about what to do in the future because the problem is removed from me.”

Kiranto credits CMU with teaching him “how to humbly bring change.” Studying peace and conflict transformation has taught him how to be patient in dialogue and how to talk to people so that ideas come from them instead of from outside their community.

Kiranto is a Maasai, an ethnic group that lives predominantly in southern Kenya and northern Tanzania. This was not always the case. The Maasai were forced to move by the British in the early twentieth century from some of the most fertile land, near Nairobi, to a much drier climate in the south of Kenya. The Maasai are feeling the negative effects of this forced relocation to this day.

The Maasai are traditionally cattle farmers. The drier climate forced them to adopt a nomadic lifestyle to have access to water by following the rain. This practice has become increasingly unsustainable due to the Maasai’s territory being reduced and an unpredictable climate.

Kiranto says the most pressing need for people in his community is easy and reliable access to water.

“I’ve always heard people say water is life, but in Canada, other things can be life because we have water,” Kiranto says. A large portion of Kenya has been experiencing a drought for nearly two-and-a-half years. The Kenyan government estimates it is affecting 1.6 million people.

There are currently two main sources of water for people in southern Kenya: infrequent rain and a pipeline from a stream in the highlands. These two sources are insufficient, though. Many people walk up to 40 kilometres daily to get water.

Kiranto sees two main ways to improve water security for these families. The first is to institute programs to organize efficient collection of rainwater. The second is to lobby the government to raise the pipeline to increase its supply range. He feels optimistic that this will be an achievable goal when he returns home.

Lack of water also affects food security. Farmers are being encouraged to practice mixed farming: growing crops that require little water in addition to raising cattle. Mixed farming provides a much more sustainable and reliable livelihood. Two potential sources of income mean that a family can still maintain a decent standard of living if either the cattle or crops have a bad year.

Another significant issue is a high rate of HIV among young people. A United Nations study from 2013 estimated that up to 6.6 percent of people ages 15-49 were living with the virus, compared to an estimated 0.4 percent in Canada in the same demographic.

The high prevalence of HIV means many are unable to work and that food production and community development suffer. Kiranto says food production and public health are essentially tied to one another. He sees the need for what he calls a “holistic ministry”: combining HIV prevention education and sustainable agriculture practices in order to most effectively help communities improve their quality of life.

“For this development to happen, someone with ideas can’t develop them. The people need to think of ways to serve their own problems,” Kiranto says. After he returned home the first time from Canada, people in his community were resistant to his ideas. They saw him as trying to bring in new traditions from outside that did not fit into their way of life.

Though the situation can seem hopeless at times, Kiranto sees a small but continuous rate of success. “Change is inevitable,” he says, adding that the few people who find success and a better life with each program can inspire and educate others in their community towards a better life.

It is this small, yet continuous, movement towards improvement that gives Kiranto the drive and hope to continue working to improve the quality of life for people in Kenya.

Daniel Friesen, 22, is a music student at CMU. He worships at Charleswood Mennonite Church, Winnipeg.

Joseph Kiranto (red t-shirt) stands with his family (from left: Elizabeth, Joy, Joel and Kaleb) at a CMU event in September 2014. The Kirantos moved from Kenya so that Joseph could study at CMU. (Photo courtesy of CMU)

Joseph Kiranto was the valedictorian for CMU’s Class of 2015. He wants to use his training in peace and conflict transformation to make a difference in his home country. (Photo courtesy of CMU) 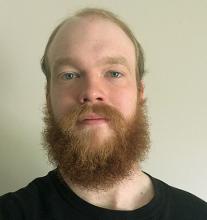