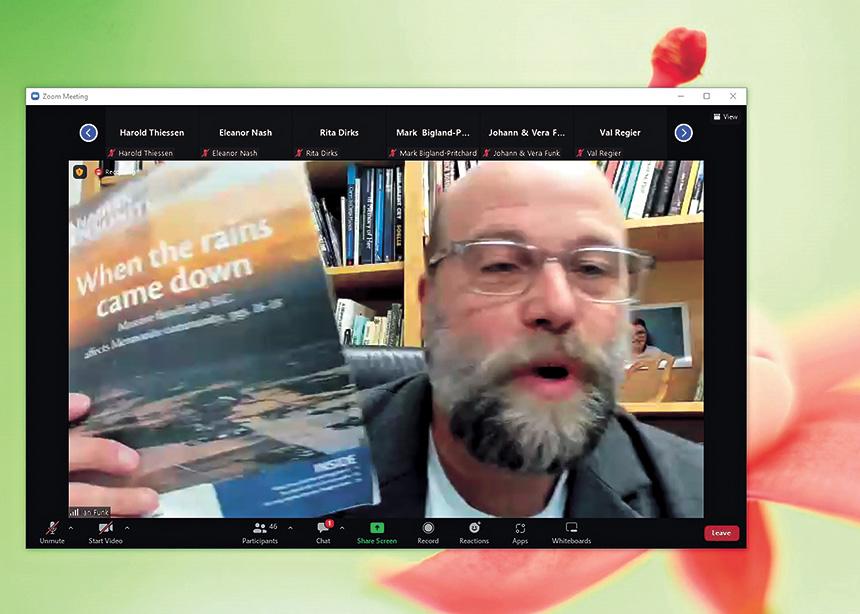 On May 25, Canadian Mennonite hosted its first-ever discussion event. But the magazine didn’t shy away from immediately diving into a tough topic: the climate crisis and the church.

Three panellists shared reflections and responded to the 50 or so people who attended the online event, which was hosted by Aaron Epp, CM’s online media manager. Throughout the 90 minutes, they addressed the question, “How can we, as Mennonites in Canada, best respond to the climate crisis?”

“Thank you to all of you who have joined. I think your presence here is a sign of hope,” said panellist Anthony Siegrist, the director of A Rocha Ontario, a Christian environmental stewardship organization, at the beginning of his remarks. He has graduate degrees in theology and science, and he has worked as a professor, pastor, farm hand and adventure guide.

The other panellists had their own reasons for being passionate about creation care. Ian Funk is pastor of Langley Mennonite Fellowship in British Columbia, and is part of the Mennonite Church B.C. Creation Care Task Group and MC Canada’s Sustainability Leadership Group. Joanne Moyer is associate professor of environmental studies and geography at The King’s University in Edmonton. She has been a member of the Mennonite Creation Care Network for almost 20 years and serves on MC Canada’s Sustainability Leadership Group.

Glaciers melting, species going extinct, people losing their homes to floods and dying in heat waves—it’s clear, even without scientists’ repeated warnings, that the planet is in a state of emergency. So how might Canadian Mennonites respond to the climate crisis?

It turns out they have already been thinking about it for decades, Moyer said, mentioning a document from the 1970s that contained Mennonites’ environmental concerns. She said Christians are also some of the first people to have talked about climate change as a justice issue: the idea that those people who create the most waste won’t feel the worst impacts. “It seems to be that more holistic understanding of environmental issues is commonly something that faith-based approaches bring to environmental concerns,” she said.

Mennonites, especially, understand the theology and practice of simple living, and they have a practised willingness to get their hands dirty, trying things out and finding solutions, Siegrist said.

All three panellists suggested that Mennonites can contribute hope to the climate conversation.

“There’s a lot of despair out there, and faith perspectives can offer a less apocalyptic approach, or at least some comfort, a sense of working with these issues with a higher power behind us and with us,” Moyer said.

Siegrist said, “I do think there is reason to be hopeful, as long as we don’t think we’re being hopeful that we can avoid climate change.” The reality is that we are going to see the effects of climate change get worse in the years to come, he noted.

This is where response meets action. Moyer reflected on whether personal lifestyle changes or political advocacy are more important. In short, both are needed. Many people argue that focus must be on big systemic change, but this ignores what individual action can accomplish, and it tells those who aren’t comfortable protesting that they have nothing to contribute. Purchasing power can change the market, individual action is a highly effective way to influence others to change, and taking action helps them feel hopeful.

Yet fighting for policy change and accountability from people in power is essential, too. “The church can be a really powerful middle ground between the big-scale societal change and the individual actions,” Moyer said.

Funk suggested working with partners and following their lead, because there are often things the church does not get right. He pointed to greening theology, discipleship and churches—whether that is encouraging each other to make personal changes, connecting with the land, listening to Indigenous peoples or lobbying government. Finally, we need to look to children.

“I’m thinking that we join them, listen to them, lend them our power and wealth . . . and we take the burden before it becomes too much for them,” he said. “The good news is, we’re a community, so we’re never stuck doing this on our own.”

This conversation marks the launch of CM’s new online discussion series, which will explore current events that are impacting the church and wider world.

The magazine publishes articles written on hundreds of different topics, but it will “continue this discussion in a different form, a form that allows us to gather together to hear from people who are invested in this work and to discuss with one another possible ways forward,” Epp said in his opening comments. Upcoming topics include Indigenous-Settler reconciliation on Oct. 5 and “Why am I Mennonite?” on Nov. 2. 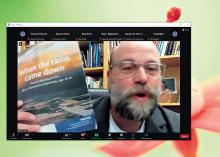