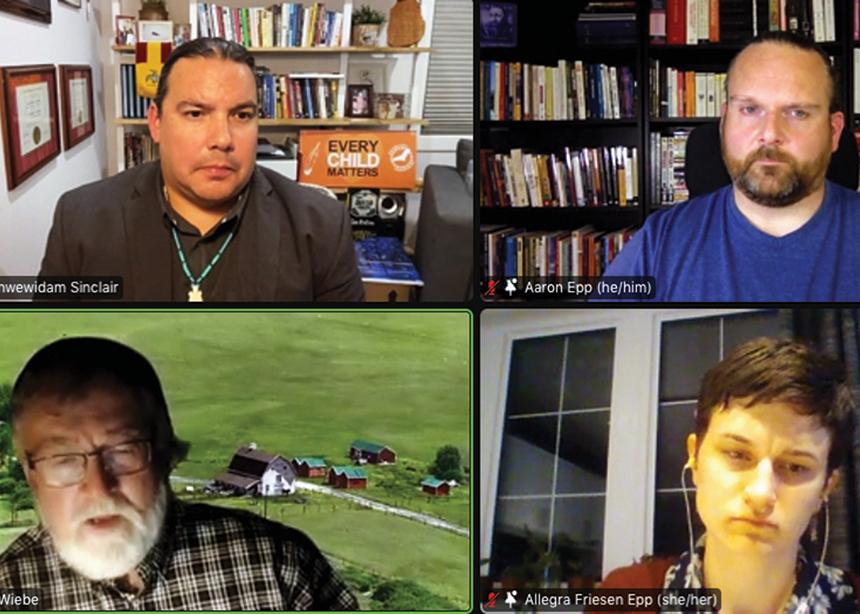 This September, Canada marked its second annual National Day for Truth and Reconciliation. Throughout the month, people talked around dinner tables, in the media and at workplace meetings, about Indigenous-Settler relations and the country’s history of residential schools.

Canadian Mennonite joined the conversation by hosting the second event in its new series of online panel discussions. On Oct. 5, CM online media manager Aaron Epp hosted the conversation on Zoom, which featured three guests sharing what concrete steps they are taking to further reconciliation.

Doyle Wiebe is a fourth-generation farmer in Langham, Sask., who shares his land with Indigenous Peoples through the Treaty Land Sharing Network. The network’s website directory lists privately owned land in Treaty 4 and Treaty 6 that Indigenous Peoples are invited to access safely to practise their way of life—gathering plants and medicines, hunting, holding ceremonies and other uses. The sign on Wiebe’s land says, “Treaty Land Sharing Network: Indigenous people welcome.”

Niigaan Sinclair is a professor and head of the University of Manitoba’s Department of Indigenous Studies. He is an acclaimed Anishinaabe writer, editor and speaker, and is a columnist at the Winnipeg Free Press. Sinclair grew up in Selkirk, Man., which was an Indigenous community before the government forced his family off the land in 1907 at gunpoint. There is still no memorial in the city marking that history.

Panellists shared their experiences, challenges and advice, and fielded questions from the audience. Wiebe’s first personal interaction with an Indigenous person was with his classmate in university. Since then, as his learning and connections have grown, he has witnessed countless instances of discrimination. There is so much that must be done for reconciliation going forward, Wiebe said, noting the sign on his property isn’t at all the end of what he has to do.

Wiebe brought forward the questions: “How can we turn around the perception that non-Indigenous folks will lose something if we recognize what was stolen from Indigenous folks?” and “How do we realize that we can all gain something by healing the relationship between Indigenous peoples and settlers?”

Friesen Epp tied in her experience spending time with Indigenous land defenders in Wet’suwet’en territory. As drilling was taking place under their sacred river, they were defending the water, not only for their own safety, but also for the well-being of all the people living in that area and the generations to come. “I think we need to remember that our well-being is so entangled with one another,” she said.

In the same way, everyone is entwined in the same system of harm—the colonial structure of Canada.

“Taking action means that it’s not just enough to wear an orange shirt, but that it is within your own context to change the narrative of Canadian superiority and Indigenous inferiority, to bring it into a system of partnership,” Sinclair said. The system still communicates that Indigenous people don’t matter, he said—in street names, statues and erased maps, in the tax dollars Canadians spend every day.

“It’s not your fault, but it is your inheritance,” he said to the people gathered.

Christianity has never lived up to its own values of peace and love, Sinclair said, adding that events like this one show him that it still can. He sees an opportunity for Mennonites to take action and make change within their own people, saying, “You cannot stay idle, you cannot be paralyzed, you cannot be stuck.”

“I am a settler on Turtle Island and the work of reconciliation, decolonization and solidarity is my responsibility,” Friesen Epp said. “It is also my calling, as a Christian, to challenge systems of oppression and to actively work for peace.”

She said Mennonites have done a great job joining book studies and attending webinars, but they need to take more risks and act on the front lines. She encouraged people on the webinar to look up what is happening in their regions and join initia- tives. As Indigenous-Settler relations work within the Mennonite church in Canada shifts from the nationwide level to the regional, it is more important than ever that people get involved, she said.

CM’s online discussion series explores current events that are impacting the church and wider world. It launched on May 25 with its first conversation, which examined how Mennonites in Canada can best respond to the climate crisis.

The next dialogue is scheduled for Nov. 16. Read “CM online event asks ‘Why are you a Mennonite?’” for details. 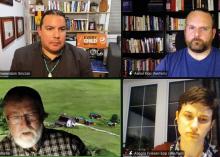