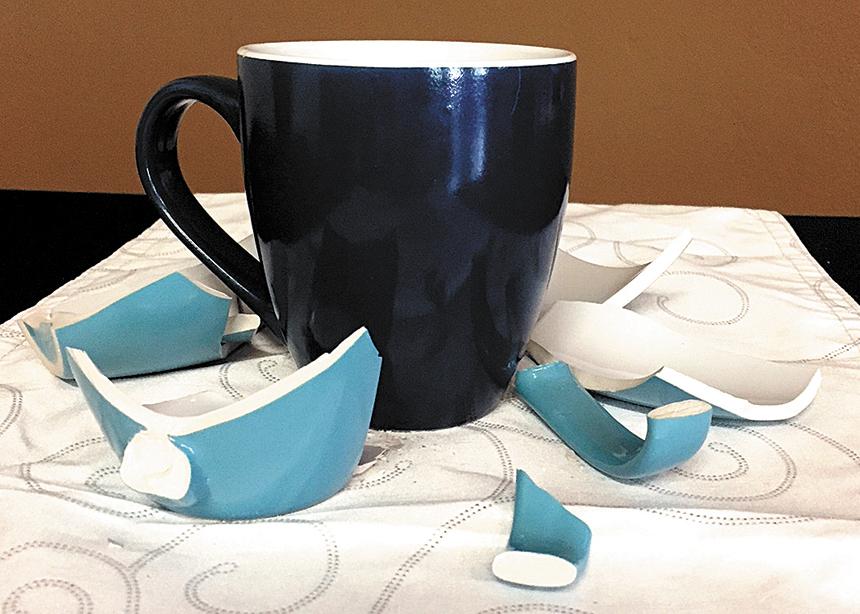 A broken cup symbolizing a life shattered by professional sexual misconduct surrounds a whole cup, symbolizing survival from traumatic experience. #ChurchToo resource person David Martin, who has dealt with several cases of clergy sexual abuse as executive minister of MC Eastern Canada, said he has been ‘deeply pained but still profoundly hopeful’ in the process. (Photo by Amy Dueckman)

Many troubling issues and questions arise when a Christian leader engages in professional sexual misconduct.

At the #ChurchToo conference at Columbia Bible College over two days in late May 2018, pastors, church leaders, abuse survivors and other interested individuals came together to learn how to deal with sin and forgiveness while confronting offenders and promoting healing for victims.

Bryan Born, Columbia’s president, began the weekend by relating the college’s own experience with sexual abuse beginning in the 1980s. A respected faculty member had preyed upon several women, causing pain to the women and forcing the college to deal with difficult issues. Born said he is still dealing with the aftermath decades later.

Carol Penner, assistant professor of theological studies at Conrad Grebel University College in Waterloo, Ont., spoke at the opening plenary session on “Abuse in the church: Sin, accountability and forgiveness.” She noted that pastoral abuse is often hard to identify because people view it as sexual sin—such as an affair, adultery or an indiscretion—when it is really abuse. Pastoral abuse is often not recognized as abuse until years later, she said.

She pointed out that the recent #MeToo movement encourages people to just tell their stories, but there is always a cost in doing so. “It’s hard to tell your story,” she said. “There are always ramifications.”

The session conducted by David Martin, executive minister of Mennonite Church Eastern Canada, was entitled “What they never taught me in seminary.” He began his presentation by smashing a cup, saying that those broken pieces represent the lives of the shattered women that cannot be put back together again. He gave several suggestions for helpfulness in such a situation, including treating victims with respect, recognizing that the person in power is always responsible for boundaries, and recognizing that emotional pain does not have an expiry date.

Often, Martin said, abuse is kept under wraps because of the pain it would cause to the abuser’s family, but he pointed out that the victim has already experienced pain. “To whose pain do we give preference?” he asked. “We need to remember we cannot own the perpetrator’s decisions.”

Elsie Goertzen, abuse prevention coordinator with Mennonite Central Committee B.C., spoke on “The right use of power, dealing with shame.” She talked about the difference between guilt and shame, and the potential effects of shame, including isolation and loss of resources.

In addition, two panel discussions dealt with the topics “How to respond to victims and survivors,” and “Reflections from experienced leaders,” and participants were able to choose from several individual workshops.

Throughout the weekend, efforts were made to provide a safe space for everyone present. A counselling and quiet room was provided for anyone who may have felt “triggered.” Participants were asked to respect privacy by not photographing others. And during question and answer time, instead of publicly asking questions on potentially sensitive topics, the audience submitted questions anonymously by texting.

#ChurchToo organizers hope participants gained a deeper understanding of the central dynamics of professional sexual misconduct within the church, and that they left better equipped to prevent and respond to painful situations that may arise within their own communities.

See also:
#MeToo in the pew next to you
When church doesn’t feel safe 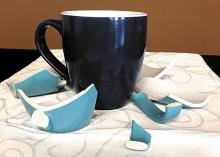 A broken cup symbolizing a life shattered by professional sexual misconduct surrounds a whole cup, symbolizing survival from traumatic experience. #ChurchToo resource person David Martin, who has dealt with several cases of clergy sexual abuse as executive minister of MC Eastern Canada, said he has been ‘deeply pained but still profoundly hopeful’ in the process. (Photo by Amy Dueckman)