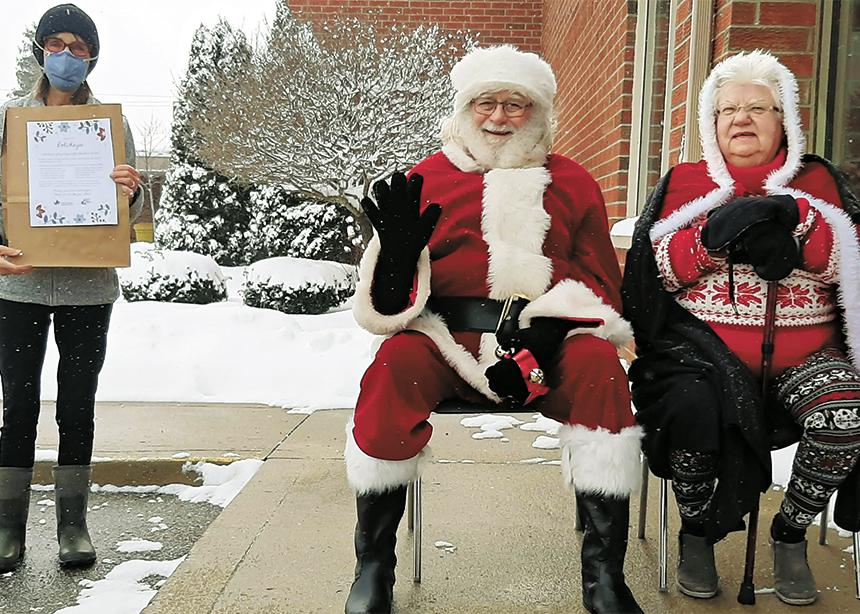 Trisha Robinson, left, executive director of the Wilmot Family Resource Centre, New Hamburg, Ont., stands next to Santa and Mrs. Claus outside Steinmann Mennonite Church in Baden, where 137 free curbside Christmas dinners were distributed. At least 10 community churches joined in the effort to bring some Christmas cheer to people in the community who were alone for Christmas. (The Wilmot Post photo by Nigel Gordijk)

On Christmas Day, 137 free turkey dinners were served up for people who needed some Christmas cheer in the Wilmot and Wellesley townships of Waterloo Region.

The curbside Christmas dinner was organized by the Wilmot Family Resource Centre based in New Hamburg, and supported by more than 10 local churches. It was aimed at anyone who was alone at Christmas, regardless of income, to “show that people out there care about them,” said Trisha Robinson, the resource centre’s executive director. “It’s the right thing to do,” she said, adding that this kind of generosity “is not anything unusual for our community.”

Steinmann Mennonite Church in Baden served as the distribution hub. With its large parking lot and kitchen, it was ideal for smooth traffic flow and physical distancing of volunteers. Rick Brenneman, who represented the Baden area church in implementing the event, emphasized that it was “a communal effort.”

The idea came from a resource centre volunteer who remembered working with churches in Port Hope, Ont., where she used to live, to serve a Christmas dinner for people who were alone.

The intent was to provide an in-person, sit-down meal, but with COVID-19 restrictions in place, that wasn’t possible. Undeterred, Robinson said they were determined to “find a way to do this.”

Through the local Wilmot Ministerial Association, several churches in the community agreed to help. They promoted the event, handed out registration forms, and offered financial and prayer support. The resource centre managed the organizational details, inviting people to sign up ahead of time.

Angie’s Kitchen, a nearby restaurant, prepared and packaged the turkey dinners at a reduced price, delivering them hot to the Steinmann church kitchen. In a time-span of 90 minutes, more than 20 volunteers saw to it that all the dinners were picked up or delivered. Two volunteers dressed as Santa and Mrs. Claus gave those who picked up their dinners an extra taste of the festive spirit. The kind of community spirit and effort to pull off the event during COVID-19 restrictions is just “one of the miracles that happens in our community every day,” according to Robinson.

James Park, pastor of Wilmot Centre Church, one of the participating congregations, was quoted in The Wilmot Post saying, “We want to be a blessing to our community, not just a building out in the country.”

Robinson saw it as “a gift from our local churches to our community members, to show we care deeply about you,” according to the article in The Wilmot Post. In a telephone interview she also noted that “we are very well supported by churches all the time,” and saw this event as “the spirit moving” in those churches. 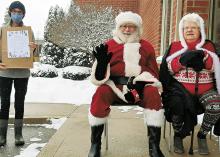 Trisha Robinson, left, executive director of the Wilmot Family Resource Centre, New Hamburg, Ont., stands next to Santa and Mrs. Claus outside Steinmann Mennonite Church in Baden, where 137 free curbside Christmas dinners were distributed. At least 10 community churches joined in the effort to bring some Christmas cheer to people in the community who were alone for Christmas. (The Wilmot Post photo by Nigel Gordijk)