Support comes through empowerment at ‘Place of Refuge’ 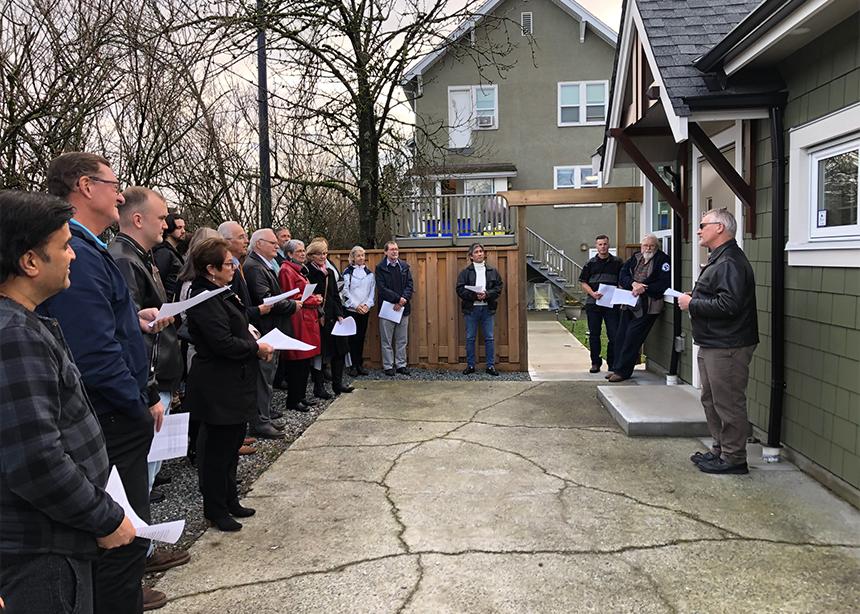 Board chair Garry Janzen, right, gives thanks for 10 years of ministry at Place of Refuge in Vancouver. A building project earlier this year enabled the construction of the Place of Refuge Resource Centre on the property, for office space and counselling. (Place of Refuge photo by Jeff Borden)

Twenty years ago, two men attending Vancouver’s Sherbrooke Mennonite Church desperately needed a safe place to live so they could find their way out of the world of addiction. Considering what could be done, Garry Janzen, Sherbrooke’s then-pastor, proposed the idea to his congregation of helping people in addiction recovery.

“We did a feasibility study to discern the greatest need and we pursued other Mennonite congregations to partner in this initiative,” recalls Janzen. “We learned that second-stage recovery [or transitional living] for men was the greatest need.”

Sherbrooke joined with fellow Vancouver congregations First United Mennonite Church (now Peace Church on 52nd) and Culloden and Killarney Park Mennonite Brethren churches to develop the idea. A society was formed and a three-storey heritage house was chosen. Ten years after the idea was proposed, the house was opened on Aug. 1, 2009.

Place of Refuge celebrated its 10th anniversary with an open house and Christmas party on Dec. 8, dedicating a new resource centre on the property. Place of Refuge’s mandate is “to provide a safe environment for people to become healthy, confident and drug-free.”

Ten residents at a time call Place of Refuge home and may reside there for anywhere from six months to two years. To qualify, the men must be clean of drug or alcohol abuse for at least three months. Staff at Place of Refuge support the residents with general financial, life and literacy skills. The residents have access to counselling and are assured an environment free of drugs, alcohol and violence.

“We look for men that have completed some intensive treatment program,” says Jeff Borden, Place of Refuge’s executive director and a licensed addictions counsellor. “We want to have them ready to be able to reintegrate into the workforce or educational stream,” and successfully transition into the community. Clients are referred by local treatment centres.

The program at Place of Refuge is Christian-based, but, Borden says, “We don’t proselytize; we invite them into the Word of Christ.” Many men have chosen to accept Christ into their lives, but the service is open to all, regardless of faith commitment, as long as residents respect that the centre is run with Christian values.

Place of Refuge does not rely on government funding. Instead, support is raised through client contributions, donations from individuals, sponsoring churches and Mennonite Central Committee B.C. An effort is made to keep living costs affordable in a city where rent is extremely high.

Peace Church on 52nd, just a few blocks away, is actively involved with Place of Refuge. On Monday evenings, pastors Lydia Cruttwell and Adam Back spend time relating to the residents through conversation and viewing short animated videos from “The Bible Project” that explain biblical concepts. Once a month the residents are invited to a community dinner at the church.

“I try to connect with the guys as I can, just hanging out as friends,” says Back. He and Cruttwell feel it is important to be involved in the common good and hopes of their neighbourhood. In addition to ministering to their own congregation, he says, “we imagine ourselves as neighbourhood pastors.”

Janzen left the Sherbrooke pastorate in 2007 to become MC British Columbia’s executive minister, but he remains as Sherbrooke’s representative on the board that he currently chairs. “We are developing relationships with Peace Mennonite Church in Richmond and Point Grey Inter-Mennonite Fellowship [in Vancouver], which may hopefully lead to official partnerships,” he says.

For more information about Place of Refuge, visit placeofrefuge.ca. 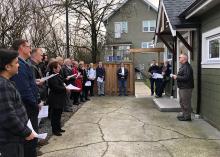 Board chair Garry Janzen, right, gives thanks for 10 years of ministry at Place of Refuge in Vancouver. A building project earlier this year enabled the construction of the Place of Refuge Resource Centre on the property, for office space and counselling. (Place of Refuge photo by Jeff Borden)