‘We can only do it if we’re all doing it together’: Janet Peters 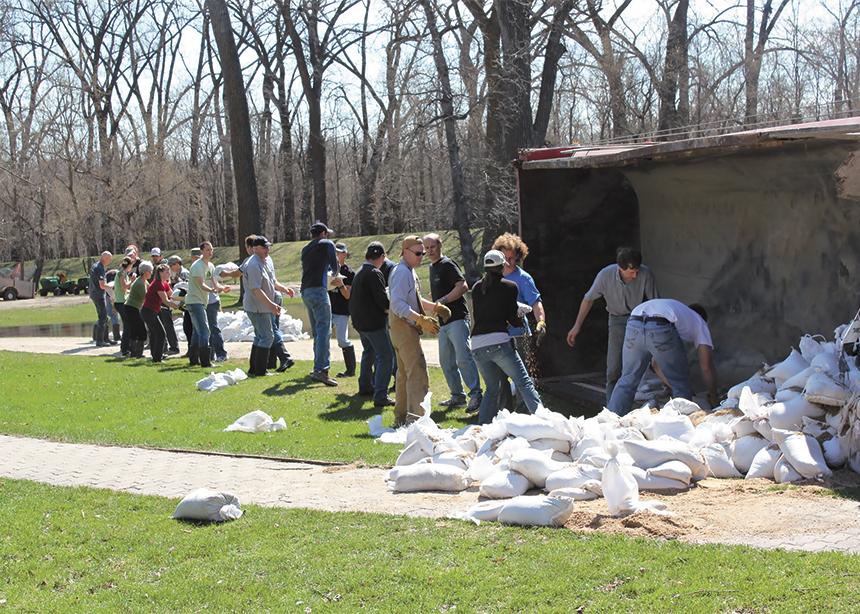 Springstein congregants join others to help place sand bags at Camp Assiniboia during the flooding of 2011. (Photo courtesy of David Hogue)

After a week of non-stop activities soundtracked by endless cheering and screaming kids, you might think the staff of Camp Koinonia would sleep in. Instead, every Sunday morning they put on their Birkenstocks and cleanest clothes and head to Whitewater Mennonite Church in nearby Boissevain.

Many Mennonite Church Manitoba congregations are involved in Camps with Meaning (CwM), the regional church’s ministry that consists of Camp Koinonia and Camp Assiniboia. Congregants volunteer, pray, donate, send their children, give their pastors time to serve there, and pay their young adults who work as staff.

But some congregations have developed special relationships with the camps. Attending Whitewater has been a tradition of Koinonia staff for as long as Molly Schaefer can remember, even back when weekend breaks between camp sessions were less than 24 hours. Schaefer worked at the camp for 10 years, doing everything from counselling in summer to managing the camp while living onsite throughout the year.

Every summer, camp staff plan and lead a worship service for Whitewater. Congregants host the workers for tailgate barbecues and pancake breakfasts, young mixing with old, conservative and liberal churchgoers connecting with each other.

“The staff are really great about spreading out at tables . . . they’re getting to know the church members,” says Matt Heide, a Whitewater member and general manager of Koinonia. He says they bring a new energy and bigger purpose to the roughly 50-person congregation. “You think of just the singing alone, and you add 20 staff into that, well that’s a big deal. . . . Whitewater, the members, appreciate them so much.”

The feeling is mutual. And not only because of the constant supply of homemade cookies that Whitewater congregants send to camp staff by the pail, although their rallying effect on dozens of tired young adults must not be underestimated.

When Schaefer was working as resident manager and needed help, she could pick up the phone and, in 20 minutes, someone from the church would be on their way. “People were, from my experience, really willing to show up and help out . . . that community was there and ready to jump in whenever the time called for it,” she says.

Camp Koinonia was initiated by a group of several churches in southwestern Manitoba in the 1960s. Now a group of locals, many of whom attend Whitewater, operate the camp under the name Camp Koino Inc. and rent it back to Camps with Meaning for summer programming. “There’s just too much passion yet in this area to let Koinonia go,” Heide says.

Springstein Mennonite Church’s proximity to Camp Assiniboia, near Headingley, means that the two are also a closely intertwined community. Springstein receives the first phone call when a windstorm knocks over trees or a building project needs extra help, says Dave Wiebe, a Springstein member who grew up working at the camp. He has been a member of committees supporting Assiniboia for more than 15 years.

Springstein was instrumental in the founding and development of Assiniboia in 1949. To this day, camp is still one of the church’s top two mission priorities, Wiebe says. “It’s in our DNA, that’s for sure.”

Assiniboia’s summer staff don’t regularly attend Sunday morning services at Springstein the way their western counterparts do. But they connect and visit every summer when camp staff lead a worship service for the congregation. For Springstein, the stronger connection is with Assiniboia’s year-round staff, who live at the camp or in the area and are active members of the church.

The eager enthusiasm of these dedicated staff “is what keeps the passion in me and our church,” Wiebe says. “It’s infectious . . . when you see new people coming in, and that candle gets reignited with that excitement, that flame keeps going and that’s the exciting part of being part of this.”

Wiebe says he finds this work compelling because camp is a “mission field of equipping our young adults to become better leaders within the Christian community. . . . To me, it’s the best place where leaders are shaped and formed.”

Schaefer adds, “[Camp] gives a really unique and beautiful access point to faith and church for an age group that often starts to stray away from the church.”

In addition to Whitewater and Springstein, dozens of other MC Manitoba congregations are deeply invested in CwM’s ministry, while still others choose to send their kids elsewhere and have never set foot in either camp.

“I think it just needs to be said that Camps with Meaning is a ministry of all of the MC Manitoba churches,” says Janet Peters, CwM’s associate program director,  “It’s a huge piece of what we do together, and one church couldn’t do it. We can only do it if we’re all doing it together.” 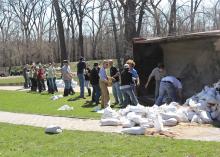 Springstein congregants join others to help place sand bags at Camp Assiniboia during the flooding of 2011. (Photo courtesy of David Hogue)