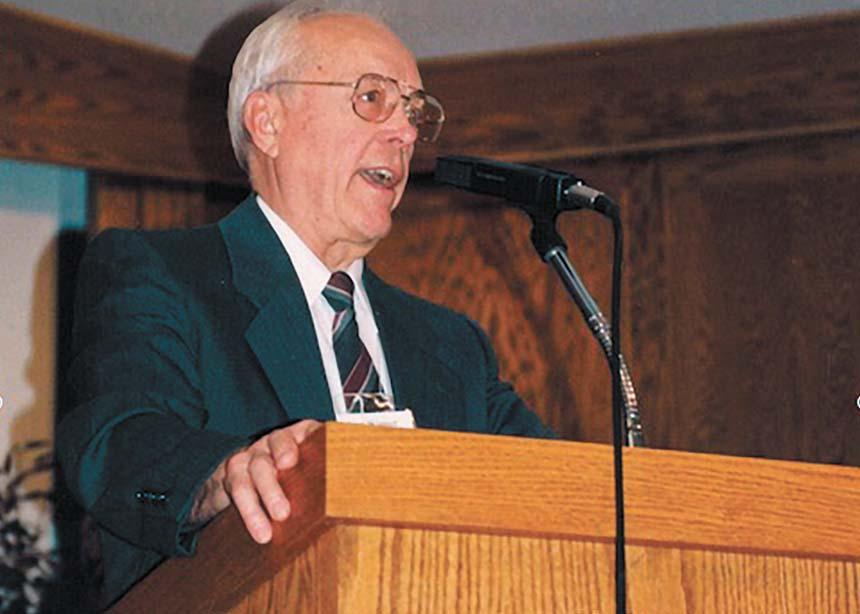 In the late 1990s, Robert Witmer served as a consultant for the Giving Project in Mennonite Church Eastern Canada. (Canadian Mennonite file photo)

Robert Witmer, who served in France from 1956 to 1984 with the Mennonite Board of Missions (MBM), helped to plant the Châtenay-Malabry church in Paris and was instrumental in opening doors for people with disabilities. He died on Dec. 2, 2021.

Robert “Bob” Witmer helped bring life to the vision of the church as a priesthood of believers whose witness extends beyond the walls of institutional religious establishments. His legacy includes helping Mennonites in France plant the Châtenay-Malabry church and the French Mennonite Mission, out of which were founded Friends of the Workshop and Domaine Emmanuel (now AEDE) to serve people with disabilities.

From 1956 to 1984, Robert and his wife Lois served in France with Mennonite Board of Missions (MBM), a predecessor agency of Mennonite Mission Network (MMN). At the beginning of their ministry in Paris, the Witmers contributed their gifts to the emerging Châtenay-Malabry church, which is now a multicultural Mennonite congregation whose members have roots in Africa, Asia, the Caribbean, Europe and North America.

They also worked alongside French Mennonites to create AEDE workshops for adults with disabilities, both on the Châtenay-Malabry church property and on a farm in Hautefeuille, east of Paris. Today, AEDE employs 1,550 people and has grown to include 28 properties with wide-ranging services in 19 locations in France.

“Robert, in accordance with his Mennonite beliefs, put his faith into practice,” said Bernard Huck, a long-time member of the Châtenay-Malabry congregation and retired professor of theology in France and Chad. “He was a man of vision, a builder, a zealous planner, and a pastor. His family left a blessed memory with the families of our church, for which we are so grateful.”

Janie and Neal Blough, who retired in France last year, after more than four decades of ministry through MMN, expressed warm appreciation for the Witmer family. “The Witmers’ experience, friendship and advice were precious in our time of adaptation,” the couple wrote in MMN’s tribute to Witmer.

Born May 15, 1929, on a farm between New Dundee and Petersburg, Ont., to Vernon and Vinetta (Shantz) Witmer, Robert attended Mannheim Mennonite Church near Petersburg. He and his future wife, Lois Martin, were members of the first graduating class at Rockway Mennonite Collegiate in Kitchener, Ont.

Robert paid his way through high school by milking cows on a local farm, doing custodial work at Rockway and developing a successful door-to-door business selling vacuum cleaners. According to his family, he was an entrepreneur at heart, a skill that he put to good use in every aspect of his life.

After Lois and Robert married in 1949, they studied at Eastern Mennonite College (University) in Harrisonburg, Va. In 1953, they moved to Goshen, Ind., for seminary studies at what is now known as Anabaptist Mennonite Biblical Seminary. After completing their formal education, they began their MBM ministry in Paris in 1956.

The chapter of the Witmers’ life in France closed in 1984, and they moved to northwestern Quebec, where they worked alongside the Evangelical Mennonite Church of Rouyn-Noranda for 10 years.

In 1995, the couple retired to a cottage at Fairview Seniors Community in Cambridge, Ont., and became active members of Preston Mennonite Church.

A fuller account of Robert’s life and ministry in English, can be found in David Yoder Neufeld’s book Common Witness: A Story of Ministry Partnership between French and North American Mennonites, 1953-2003. 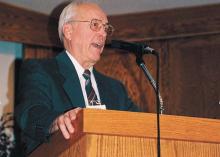 In the late 1990s, Robert Witmer served as a consultant for the Giving Project in Mennonite Church Eastern Canada. (Canadian Mennonite file photo)