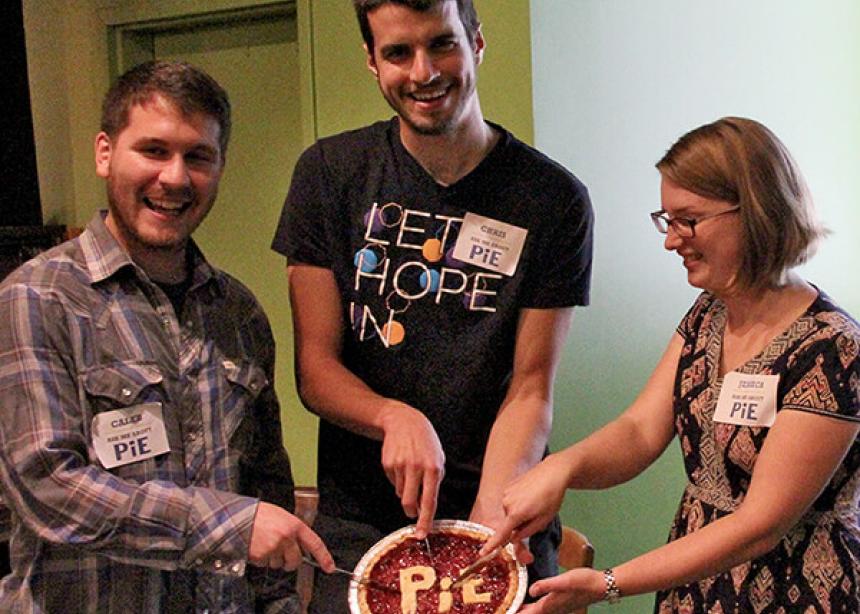 Board member Caleb Redekop, centre, cuts the PiE pie with Chris Brnjas and Jessica Reesor Rempel at Pastors in Exile’s kick-off on Sept. 27, 2015, at the Queen St. Commons Café in Kitchener, Ont. (Photo by Dave Rogalsky)

Both Jessica Reesor Rempel and Chris Brnjas are fond of puns, as perhaps only geeks are.

Self-professed “church geeks,” they kicked off their new ministry, Pastors in Exile (PiE) at the Queen Street Commons café in downtown Kitchener on Sept. 27, 2015, with many pies being consumed by the 85 people who attended.

Taking off from Jeremiah 29:7, “But seek the welfare of the city where I have sent you into exile, and pray to the Lord on its behalf, for in its welfare you will find your welfare,” their plan is to reach out to young adults in the area who are only marginally in touch with the Mennonite churches there. They reason that, instead of being apart from the society in which they and other young adults live, they need to be a part of that society.

Ministry is currently in a foreign place compared to the years of Christendom that preceded it. The church feels like it is in exile. But instead of fear and isolation, the church needs to attend to the culture around it, including its own young adults. To that end, PiE is not a new church, but rather a ministry connected to existing churches.

Their plan is hold events that are “non-churchy,” like games nights and potlucks, as well as more “churchy” ones like a “feminist” Bible study, a “theology night for doubters,” and “winter camp for grown-ups”; the latter is scheduled for March 4 to 6 at Silver Lake Mennonite Camp near Sauble Beach, Ont.

Reesor Rempel notes that PiE is an experiment and they feel encouraged by many to carry it out. Like many experiments, it might not last long, but doing it is the important thing, rather than doing nothing, or only doing the traditional “churchy” things like Sunday morning worship and committee work.

PiE is an accredited not-for-profit organization with two staff and is looking for support from both individuals and congregations. Support currently comes from individuals and Mennonite Church Eastern Canada.

PiE opened space in the Mennonite Savings and Credit Union Centre for Peace Advancement’s Epp Incubator at Grebel earlier this fall, and intends to use that as an opportunity to interact with other non-profit start-ups in the community. In his comments at the opening of the Incubator, Brnjas spoke of the need to see bridging the gap between generations inside and outside the church as a significant peace effort. 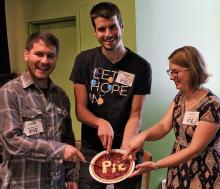 Board member Caleb Redekop, centre, cuts the PiE pie with Chris Brnjas and Jessica Reesor Rempel at Pastors in Exile’s kick-off on Sept. 27, 2015, at the Queen St. Commons Café in Kitchener, Ont. (Photo by Dave Rogalsky)