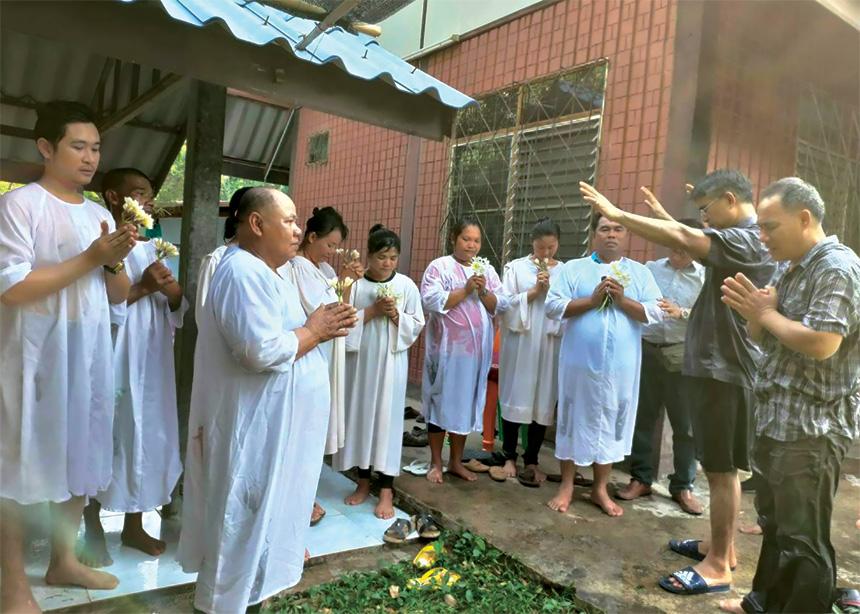 “There is a great deal of love for the work Tom and Christine do, and for them as a family. Their stories and visits are always warmly received,” says William Loewen, pastor of Trinity Mennonite Church in Calgary.

Tom and Christine Poovong are Mennonite Church Canada International Witness workers in northeastern Thailand, providing pastoral leadership to Christian communities there. The couple and their two children, Joseph, 9, and Phimchanok, 11, have been members of Trinity for more than 15 years, and before that they were members of First Mennonite Church in Calgary.

Tom and Christine have been a part of our church life since before I started at Trinity in 2010,“ says Loewen. “They were a big part of the larger Lao-Thai Christian community, giving formal and informal leadership, and serving as the bridge between that community and our congregation, continuing the work of Tom’s extended family since their arrival in Canada.”

Not only did the Poovongs serve as a bridge between the church community and immigrant communities in the city around them, they also gave leadership in the life of the church, including as deacons. They both worked at the Mennonite Central Committee (MCC) thrift store, where they organized and oversaw a very profitable outlet, raising funds for the work of MCC. During that time, they built relationships with volunteers who gathered to sort clothes, staff who worked alongside them, and customers who entered the store.

“Even before they left for Thailand, their heart for missions was encouraging to us as a congregation,” says Loewen.

“Trinity is like a family to us,” says Tom. “The Lord used my mom to bring us to First Mennonite and then Trinity, until presently as we were sent out to be Witness workers . . . representing our home church.”

Trinity Mennonite has been following the Poovong family on their journey to Thailand through regular updates on church planting, entrepreneurship training and community building work that they do. In 2016, a group of 10 from Trinity, led by Hugo and Doreen Neufeld, travelled to Thailand for three weeks. There, they were able to put faces to the stories they had been hearing. With a large part of the Poovongs’ work being entrepreneurship and small business support, their church friends were also able to see the financial and social need for that work, and also the fruit of it.

Along with building self-sufficient congregations in Thailand, they have developed income-generation ministries, including MennoShoes and an Issaan food restaurant, businesses where Christian disciples make a steady income and are able to give back to their local congregations. These churches have become part of a church-planting organization started by the Poovongs in 2016 called Friends of Grace Church, which became recognized by the Thai government and ministers in Thailand and Laos.  The Poovongs’ goal is to establish self-sustainable, locally run peace churches.

They also connect with leaders of other Thai Mennonite congregations to encourage relationships and fellowship among emerging Mennonite communities across Thailand and Laos. They were also approved and registered with the Evangelical Fellowship of Thailand in October 2018.

Most recently, the Poovongs invited Trinity members Paul and Vila Phomasavanh to travel to Thailand and Laos to help in the training of pastors and leaders in the network of churches the Poovongs give support to. The Phomasavanhes’ work has been supported by the congregation.

There have also been some informal conversations within the Calgary congregation about sending young people to Thailand to be a part of the English language-training work that happens through the educational projects the Poovongs have started.

COVID-19 has also impacted the Poovongs’ work and encouraged them to grow in income-generation projects to help provide jobs for those who returned to rural areas from the cities. This, in turn, has created more opportunities for their ministry.

“Since COVID-19, we turned our house to become a house church, and one of our local disciples also did the same at their home in another community,” says Tom. “So, we now have two house churches in Khon Kaen City where we are living now.”

Not only does Trinity Mennonite support the Poovongs financially and learn about their work, the church also lifts them up in prayer. “Our home church and other Mennonite churches were our main partners and prayer supporters from the beginning,” say Tom.

As the Poovong family and Trinity Mennonite Church continue life on opposite sides of the globe, their connection is strong and hope for their future together is evident. 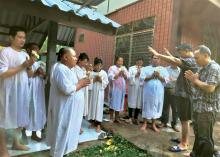