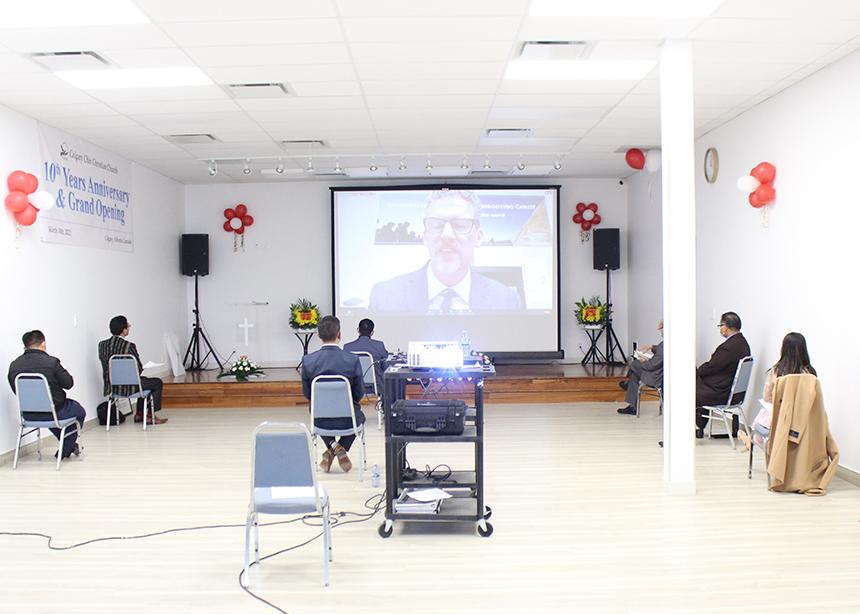 “God is so good to us,” said Pastor Leng Nawn Thang excitedly as he spoke about all the ways God has taken care of Calgary Chin Christian Church, a member of Mennonite Church Alberta, over the last 10 years. “When we came to Canada, we asked, ‘How can we sing a new song in a strange land?’ Now we are celebrating our 10-year anniversary and the grand opening of our new church building!”

On June 6, 2010, a small group of Chin refugees from Myanmar started teaching Sunday school in a small house in their Calgary community. On March 14, the 87 church members plus friends celebrated all that God has done at a special three-hour live-streamed service from their new church building.

The service kicked off with the pastor declaring that the church’s open door shall be a gateway to God’s kingdom, shutting out hate and inviting everyone to come and use the building seven days a week, 24 hours a day.

Doug Klassen, executive minister of MC Canada, recalled how he had preached in that little house, pressed against the TV while the church was packed with families in the living room, kitchen and dining room. He spoke at the dedication service, saying, “I saw you as my brothers and sisters because we become who we worship. We are one because we both worship Jesus Christ.”

Thang said the church faced the challenges leading up to its 10th anniversary, including a financial one. In 2011, it was finally able to rent space from the Calgary Vietnamese Mennonite Church. Made up of mostly low-income families, and struggling to save money for its own building, the Vietnamese church only charged the Chin church $150 per month for the entire 10 years so it could reach its dream. After 10 years, Chin church members were able to save $100,000 towards a down payment.

Although grateful for the low-cost accommodation, the desire to have new ministries that would require more time and space became a growing challenge. When someone from the Chin community dies, whether in Canada or abroad, there are three nights of services. The women’s and youth group and worship teams also needed more space to meet and practise, so they met in homes. Special events were difficult to host.

When the opportunity to purchase a property came up, the Chin congregation began to pray. It was calculated that the church would need $200,000 for the down payment and another $200,000 for the renovations. Every Saturday the women’s group prayed for two hours. Congregants were challenged to give to a building fund beyond their tithing. Due to their sacrificial commitment, the church members came up with another $62,290. Members were also asked to give interest free-loans. Fundraisers were held. But it still wasn’t enough.

Church chair Salai San Awi wept as he gave official thanks at the grand opening.

Brenda Tiessen-Wiens, MC Alberta’s moderator, who has been very involved in the lives of Chin families over the years, shared how she has been richly blessed in these relationships, and she prayed for the Holy Spirit to continue to empower them.

Two sermons were given, one by Pastor Chau Deng of the Vietnamese Mennonite Church on the importance of giving Christ first place, and one by Tim Wiebe-Neufeld, executive minister of MC Alberta, on Psalm 84, “How lovely is your dwelling place,” with reflections on how a church is built with living stones, the cornerstone being Christ.

Bergthal Mennonite Church in Didsbury was invited to offer a prayer of thanksgiving, so the congregation gathered on Zoom to pray, and then every member held up a cut-out heart in unison to show their love and shared thanksgiving.

The service ended with the church leadership handing out certificates and small gifts to recognize their partners.

To the question, “What is God calling you to do next?” Thang replied, “In my heart I feel we need to learn a lesson from those who have given generously. We need to ask how we can extend our ministry by giving and sharing.” He said one way would be to bless another church like the Vietnamese church blessed Calgary Chin Christian Church. “God has done great things for us and now any ministry we want to do, we can do!”

This article appears in the March 29, 2021 print issue, with the headline “‘How lovely is your dwelling place.’” Do you have a story idea about Mennonites in Alberta? Send it to Joanne De Jong at ab@canadianmennonite.org. 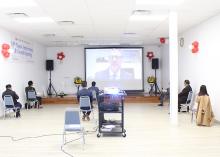