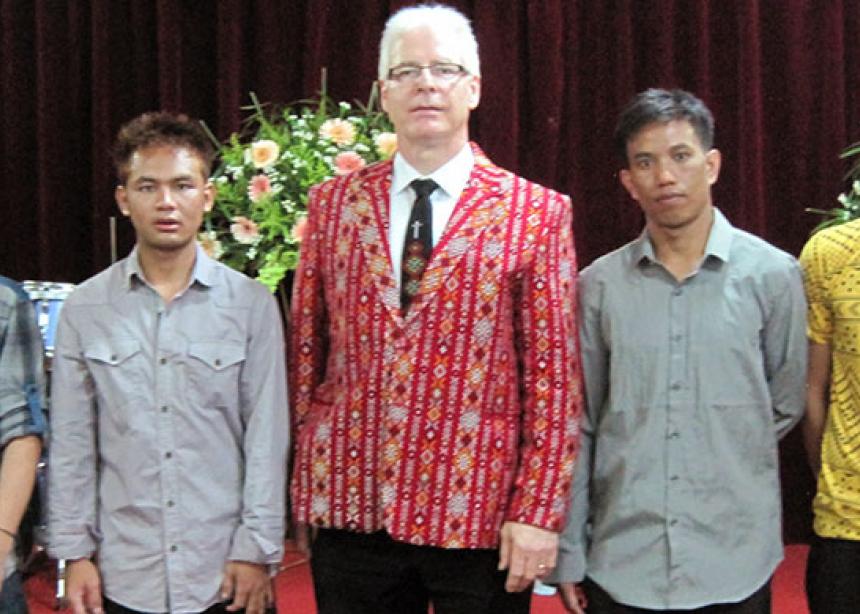 David Martin was invited to Myanmar (formerly Burma) in March 2015 to preach two or three times and to teach from the book of Galatians in four sessions over two days. By the time he returned he had also performed two graveside memorial services, baptized six, preached at a wedding, and took part in many more services in Myanmar and Malaysia. Martin, Mennonite Church Eastern Canada’s executive minister, travelled to South Asia with Pastor Jehu Lian Ching of the Kitchener (Ont.) Chin Christian Church.

Jehu (the Chin generally go by first names) feels a strong affinity to Anabaptist/Mennonite theology and has worked to convince a number of other American and Canadian Chin congregations to join local Mennonite bodies. Part of the reason for the visit, at the invitation of Chin Christian leaders in Myanmar, was to talk with an American Baptist-connected denomination which is interested in a relationship with Mennonite World Conference (MWC). Martin and Jehu will communicate with MWC that the group is seeking some kind of connection.

Meanwhile, some individual congregations in Myanmar are renaming themselves with Mennonite as part of their names. One of these is the church formerly pastored by Jehu’s father, Rev. Teichum Lian Ching. Jehu’s brother, Chan Kep Tu, also pastors in Hakha, capital of Chin State.

Jehu notes that many Christians in Chin State have the belief that, while salvation is through Jesus Christ, they must keep many Old Testament laws in order to live as Christians. Martin’s teaching on Galatians was planned to counteract that way of thinking. Paul in Galatians preaches a salvation by grace through faith without the need to follow the Jewish law. Martin and Jehu believe the study was well received by the pastors and theological students who attended.

Myanmar’s government has moved toward a more liberal democracy over the past five years and many western governments have lifted sanctions. Cell phones and motorcycles are ubiquitous in the country now. Jehu was amazed at these changes and the building and roadwork going on, compared to a visit he made just a year ago. But many Chin refugees in places like Malaysia are left in difficult situations. After fleeing from religious and ethnic persecution, they are in Malaysia without papers and unable to work, and cannot return without documentation. If arrested without papers, they can languish in jail for years, experiencing regular and debilitating beatings.

As part of their trip, Jehu and Martin visited Chin believers in Malaysia. At a service where Martin preached, the pastor’s wife shared about having been released just the day before, after several weeks in prison, even with proper documents.

Martin believes that all have gifts to share and all have needs that can be met by others in the worldwide church. Benefits of his visit to Myanmar for MC Eastern Canada include the joy with which Anabaptist/Mennonite ideas are received there, encouraging Canadian Mennonites to re-evaluate the treasures they have in their historical faith. The Chin Christians’ commitment to share the good news they have received and their commitment to basic Christian faith are both gifts.

“They are a generous, dedicated people,” Martin says. He was taken to several retreat centres built as places of prayer. Videos of the trip show large groups singing praise to God with joy and entering into intense times of prayer.

See also: "We want to be Anabaptist"

Pastor Teichum Lian Ching stands in front of the church he used to pastor in Hakha, Myanmar.