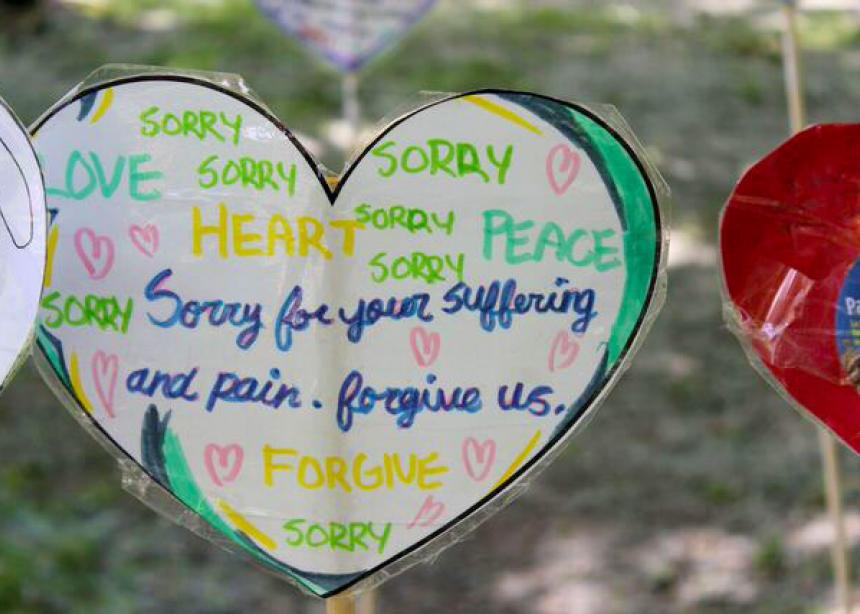 <p>One of the many hearts in the Heart Garden at Rideau Hall. (Photo by Dennis Gruending)</p>

The Truth and Reconciliation Commission on Indian Residential Schools released its final report on June 2, 2015, after five years of conducting hearings and gathering thousands of witness statements from former students and their families across Canada.

In front of a packed ballroom at a downtown hotel in Ottawa, Commissioner Justice Murray Sinclair twice used the term “cultural genocide” to describe what happened to First Nations, Métis, and Inuit people as a result of settler state policies of assimilation and colonial domination. In their summary of the final report, which will released later this year, the commissioners define cultural genocide as “the destruction of those structures and practices that allow the group to continue as a group,” such as language, spiritual practices, land use, freedom of movement, and intergenerational bonds and knowledge transfer.

Residential schools were a key tool of cultural genocide, their effects felt today by survivors and their families. The Government of Canada oversaw these schools together with national churches, including the Roman Catholic, Anglican, United, and Presbyterian Churches of Canada. Archbishop Fred Hiltz, primate of the Anglican Church, called on the “Creator to guide us in our work to address the harm associated with residential schools.”

Between 1883 and 1996, over 150,000 children were placed in these schools, where abuse, hunger, humiliation, disease, isolation, and neglect were the norm. Commissioner Dr. Marie Wilson called these institutions—139 in total—“school houses of shame” in which children who had been forcibly removed from their parents under Canadian law were deliberately “taught to hate themselves and their culture.”

Wilson also spoke of the approximately 6,000 children who died while attending the schools, many of whom were buried in unmarked graves, their names, gender, and cause of death unrecorded, often with no attempt made to contact their families. A national registry of student deaths established by the Truth and Reconciliation Commission (TRC) is in progress.

Commissioner Chief Wilton Littlechild, himself a survivor, proposed that honouring the treaties signed between First Peoples and Canada, and the 2012 UN Declaration on the Rights of Indigenous Peoples, are the “two wings of an eagle” that can help guide Aboriginals and non-Aboriginals in Canada to wītaskīwin—Cree for “having good relations.”

One of the report’s 94 recommendations is the establishment of a National Council for Reconciliation, appointed but not operated by the federal government, to oversee Canada’s “post-apology progress on reconciliation.” The official apology of the Canadian government, delivered by Prime Minister Stephen Harper in the House of Commons in 2008, was frequently invoked by the commissioners and other speakers.

Justice Sinclair cautioned that “words are not enough. Reconciliation requires deliberate, thoughtful, and sustained action.” Other key recommendations urge federal and provincial governments to reduce the number of Aboriginal children in state care, and to enact policies in health, language, education, and justice that would close discriminatory gaps between Aboriginals and non-Aboriginals. Changes to public school curricula at all levels and to the Oath of Citizenship for new Canadians are also recommended.

The Commission calls on Pope Francis to travel to Canada to apologize in person to survivors. A national research centre at the University of Manitoba will be a public repository of witness statements and other documents collected by the TRC.

The release of the report was the highlight of four days of events in Ottawa, including a Walk for Reconciliation through downtown Gatineau and Ottawa and the ceremonial planting of a Heart Garden at Rideau Hall, in which hundreds of children from the Ottawa-Gatineau region participated. Many witnesses, survivors, and officials remarked throughout the four days that the conclusion of the TRC’s official mandate must not be regarded as an imposition of closure on the “dark chapter” of the residential schools, but as an imperative to continue the ongoing work of reconciliation between Aboriginal and non-Aboriginal peoples in Canada.

One of the many hearts in the Heart Garden at Rideau Hall. (Photo by Dennis Gruending)