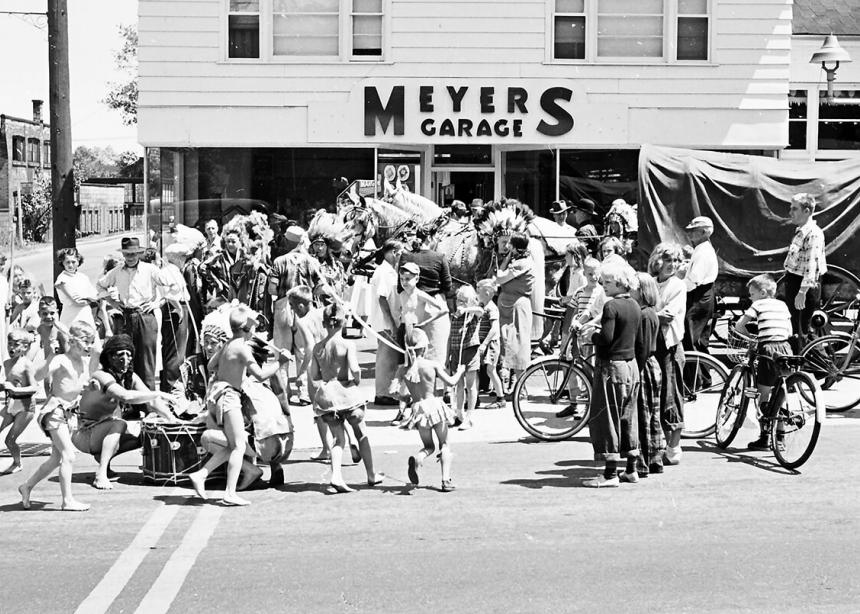 Several years ago, my Russian Mennonite grandmother told me a story about her childhood that I think about often. When she was just a young girl living somewhere southeast of Winnipeg, her parents unexpectedly lost their farmland. With no land, no money and no prospects, they packed their few belongings onto the first train out of town.

Some time later, the whole family climbed out at a random stop somewhere in northern Saskatchewan. According to my grandmother, her father swung his axe into the first tree he saw, turned back to the family and said “Welcome home.”

She went on to tell me all about what it was like growing up as a pioneer in the 1930s—about impossibly long winters, poor crops and stubborn cows.

“And of course there were the Indians,” she added, late in the conversation. “Nobody liked them much.” The “Indians,” she explained, would occasionally take vegetables from the garden without asking, which her exhausted mother found endlessly frustrating. “But then whenever one of us children fell sick, they would come and heal us,” she noted. “So I suppose it was all fair in the end.”

Having read plenty of Mennonite literature over the years, I do know her story, if not totally factual, is profoundly true in its larger arc: a sense of injustice towards Mennonites in one place, followed by migration to an unfamiliar land and, finally, the hard work of settlement, leading to new rewards. This is a story we Mennonites have been telling ourselves for a long time.

The stories we tell

Stories matter a great deal. Much more than many of us tend to think. According to the Cherokee author Thomas King, our most foundational beliefs are not simply reflected in the stories we tell, but are constructed by them. “The truth about stories,” King insists, “is that that’s all we are.” And that’s why, King suggests, “you have to be careful with the stories you tell.”

Here’s another story. This one was told by Mabel Dunham in 1924 and was published as The Trail of the Conestoga. Her tale is about the Swiss Mennonites’ arrival near the Grand River in southwestern Ontario following the American Revolutionary War. The historical romance emphasizes the challenges overcome by the Mennonites as they rambled up from Pennsylvania in their sturdy Conestoga wagons.

It’s one of those stories we like to tell ourselves, celebrating the Mennonites’ simple faith, dogged perseverance and indefatigable good cheer. William Lyon Mackenzie King, then the prime minister of Canada, liked it so much he wrote a laudatory preface for the first edition.

As you may have guessed, both Mackenzie King and Dunham forgot to mention that the settlement was on the Haldimand Tract, contested land that had been promised to the Six Nations indigenous community just a few years earlier, to “enjoy forever.” You can look for indigenous people in the book, but you’ll find them only in a few passing references to the settlers’ fears and in their otherwise palpable absence.

Dunham’s story, popular as it was, is rarely discussed by scholars of Mennonite literature. When critics go searching for the first novel of Mennonite literature in Canada, we usually end up finding Rudy Wiebe’s 1962 story, Peace Shall Destroy Many. Wiebe’s story is about Russian Mennonites settling in Saskatchewan, where they are attempting to recreate the colonies they lost in the Russian Revolution. These Mennonites, too, face many challenges, including an impoverished Métis community on the outskirts of their village.

Wiebe’s thoughtful young protagonist sympathizes with the “Indian” community and even reaches out to it through Sunday school lessons, and several tentative Mennonite/Métis relationships emerge over the course of the book. But Peace Shall Destroy Many is a story about the Mennonites’ fraught attempts to separate themselves from the world, and their leaders work hard to frame any contact between the two communities as a form of contamination. This story isn’t quite as happy as Dunham’s account, and Mennonites were not as happy to see it in print.

Now there isn’t space here to recount all the stories we Mennonites have told ourselves about our arrival in Canada, but I do want to tell you a few more, because the stories have changed over the years.

Sandra Birdsell, who is both Mennonite and Métis, likes to tell stories about how her mother’s and father’s communities have gotten along in Manitoba. Her book, The Russländer, tells the story of how the surviving members of a Mennonite family fled to Manitoba from what is now Ukraine following the Russian Revolution. Her next book, The Children of the Day, tells the story of how one of those Mennonites marries a local Métis man and the general hilarity—but really mostly the challenges and hardship—that ensues. Read together, the two novels show a broader history underlying that pattern I noted earlier in many Russian-Mennonite stories: of how colonialism informed their violent departure from the old country, how colonialism facilitated their arrival in this new country, and how it has continued to inform their experience. Together, Birdsell’s stories remind us that the story of our arrival has yet to be finished.

The last published story I want to share is another hard one, but it’s also one of my current favourites. North End Love Songs is a poetry collection about a Métis woman whose brother goes missing in the “nortend” of Winnipeg. It is a moving portrait of familial devotion in a beautiful place, set against the enduring legacies of Canadian colonialism in a city with the largest concentration of Russian Mennonites in the world. It was told by Katherena Vermette, who, like Birdsell, is of Métis and Mennonite heritage. She has published work in Mennonite literary venues in the past, but in North End Love Songs the Mennonites are readable, if at all, only through their absence. Placed beside the other stories we have been telling ourselves about this land over the past century, however, I think this story, too, has a great deal to teach us about who we are, where we live and what we mean by the word “we.”

Here is one final story. I had a conversation with some childhood friends of mine last fall. The topic of Mennonites came up, and a few of them insisted they weren’t Mennonites anymore. One wondered aloud if he ever was. This surprised me, given that we had all grown up together in a small Mennonite community, and I had often attended their Mennonite churches with them and their Mennonite families.

But their claims are not unusual. Many Mennonites across Canada have left their faith behind, and some Mennonite churches have even started to remove the term “Mennonite” from their names. Since I moved to southern Ontario, where more Mennonites retain traditional dress and other distinctive markings—like horse-and-buggies—I am informed with surprising regularity that I can’t possibly be a real Mennonite. So the story my friends were telling, it seems, is a common one: Since they have left the faith or the villages of their youth behind, they aren’t really Mennonites anymore.

But here’s the thing about that story: It’s not true. Our past is not that easily dismissed. What’s more, it is never simply ours to dismiss. After all, these friends of mine, like me, are in Canada precisely because of our Mennonite identities.

Russian Mennonites were invited to settle in Manitoba a few years after the crushing of the Métis resistance. The generous terms of their arrival were negotiated specifically as Mennonites: land was set aside for them to settle in clusters as Mennonites. Freedom from military service, like the allowance to educate their children in their own language and traditions, was awarded to them as Mennonites.

By the time my friends and I grew up—yes, as Mennonites—on that land in the 1980s and ’90s, our town was nearly exclusively Mennonite, and we attended public schools at which German classes were mandatory and the Bible was read over the intercom. We are, inescapably, products of this past. We cannot simply write ourselves out of this story or the responsibilities it entails, especially while continuing to enjoy all the benefits and privileges it has accorded us. We are made up of stories, it’s true, but we don’t always get to choose them. Sometimes, the stories claim us.

In his book If This is Your Land, Where Are Your Stories? J. Edward Chamberlin suggests that stories are “ceremonies of belief as much as they are chronicles of events.” He insists that we are made up of stories, that our beliefs about who we are and where we belong are formed and passed on through the stories we tell. I like Chamberlin’s account because it registers something of the relational, spiritual component of stories, of the significance of participating through listening, and of the power of stories to compel us into action.

I wonder what might happen if we Mennonites understood the stories we tell ourselves as our little “ceremonies of belief.” Might we ask what, exactly, we have been telling ourselves to believe? Might we work to better locate our stories within the earlier and larger stories told in this land? Might we listen more closely to these stories and find our beliefs nudged into action?

Robert Zacharias is from Winkler, Man., on Treaty 1 land, and now lives with his family in southern Ontario, where they attend The Meeting House (Brethren in Christ). He is an assistant professor in the Department of English at York University in Toronto, on the traditional territory of the Haudenosaunee, the Métis and, most recently, of the Mississaugas of the Credit River.

Originally published in a longer version in ‘Yours Mine, Ours: Unravelling the Doctrine of Discovery,’ a special fall/winter 2016 issue of Intotemak. Republished by permission of Intotemak and the author.

1. What are the stories about arrival in Canada, or other heritage stories, that are told in your family or community? Do these stories become more or less important for succeeding generations? How influential are these stories in shaping who we become? Do these stories play as large a role as Bible stories?

3. Robert Zacharias says that Mennonite identity is not something that can be dismissed. Do you agree? What is the difference between “Mennonite” as culture or heritage, and “Mennonite” as faith? For how many generations can someone claim to be Mennonite if there is no faith connection?

4. Zacharias suggests that our stories should include more about those who lived on this land before our people did. What questions do you have about early settler/indigenous relations in your community? What stories should we be telling to our children?