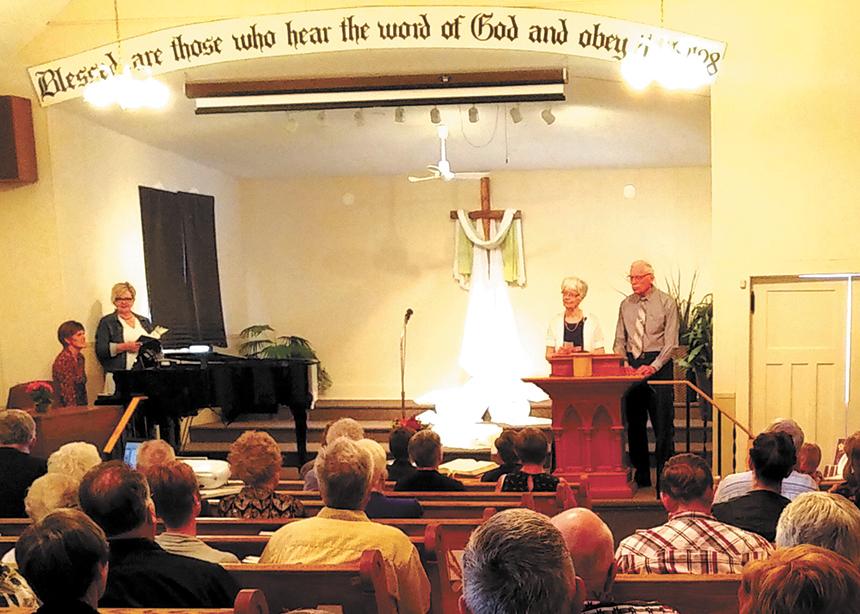 “We celebrated 108 years of life in that building,” said Ed Bueckert, referring to Zoar Mennonite Church’s sanctuary in Langham, which faces imminent closure.

About 110 members, former members, friends and neighbours gathered on April 22 to celebrate the congregation’s history and the life lived in the old building. Members from across the age spectrum reflected on experiences that had been meaningful to them through their life in the church.

Litanies of thanksgiving, lament and confession helped worshippers acknowledge God’s blessings through joyous times as well as God’s faithful presence through times of pain and challenge. Following the worship service, members and guests visited and reminisced over a fellowship lunch.

Mennonites from Kansas, Minnesota and the Dakotas settled in the Langham area around the turn of the 20th century. In late 1910, 14 families under the leadership of Nicholai Toews established Zoar Mennonite Church. Zoar, according to Genesis 19:18-23, is the name of the small town where Lot and his family found refuge following the destruction of Sodom and Gomorrah. In the same way, the congregation came to see its church building as a place of refuge and comfort through the years.

According to the Global Anabaptist Mennonite Encyclopedia Online, the group that worshipped in Langham was initially part of a larger congregation in two districts—Langham and Waldheim: “Though separated by a significant distance of over 40 kilometres, the two districts had family and church ties from their similar origins in the United States.” The two congregations formally separated in 1960, but each retained the name Zoar.

In 1911, the Langham congregation erected its original church building. A 1943 renovation added a choir loft and a second entrance. When nearby Bethesda Mennonite Church disbanded in 1948, many of its members joined Zoar Mennonite, necessitating a second renovation in 1954. This one added six Sunday school classrooms and a basement library. Two decades later, in 1974, a two-storey addition on the west side of the building contributed a large foyer, a pastor’s study, a nursery and a library on the main floor; six Sunday school rooms upstairs; and a kitchen and washrooms in the basement.

In 2011, moisture in the church basement, and the resulting black mould, started to be a problem. “People were getting sick,” said Bueckert, who is the congregational chair.

The cost to renovate the basement seemed prohibitive, as old wiring and plumbing were not up to current building standards. And even if the congregation chose to renovate, he added, “In the end, we’d still have a 108-year-old building.”

Eventually, the church decided to erect a new building on the same site. Construction began in the fall of 2017. In keeping with the congregation’s smaller demographic, the new sanctuary will accommodate around 80 worshippers. The congregation expects to move into the new building in early summer.

Although the old building has been a refuge to this congregation for over a century, the concluding paragraph of its recorded history, shared during the closing service, reminds readers that the church is not a building but a people: “Zoar Mennonite, grounded in its rich story, built on the foundation of Jesus its Lord, is now catching new winds of the Spirit, to be reborn in new ways. We are embracing a new time in a familiar place to be the beloved people of God, a light in our world.” 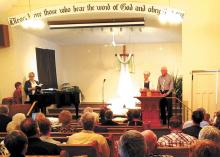 The old Zoar Mennonite Church in Langham, Sask. will be closing soon as the congregation moves into a new building on the same site. The original building served the congregation for 108 years. (Mennonite Historical Society of Saskatchewan photo)