Celebrating differences, learning to work together 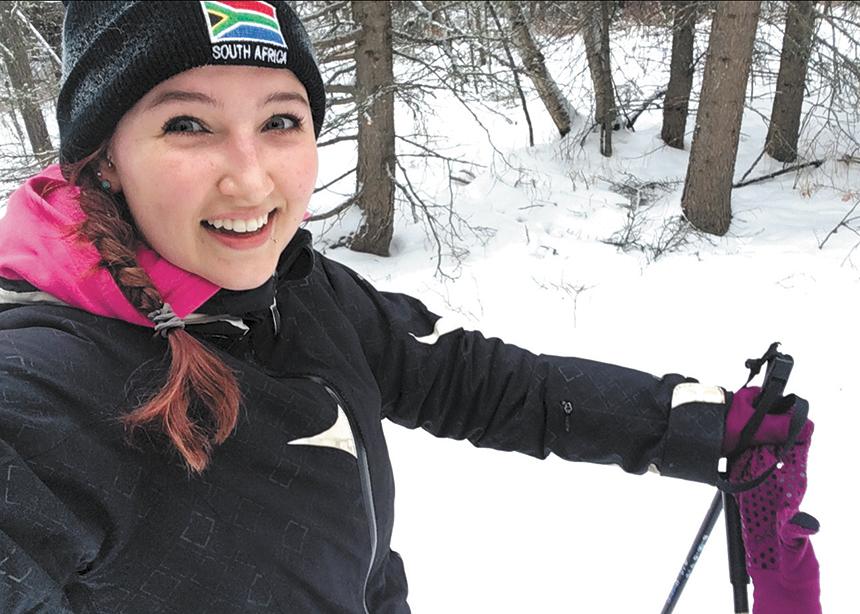 When someone suggested to Jacquelyn Janzen that she get involved with the new Joint Council of Mennonite Church Canada, she knew it was something she wanted to do.

“Being involved in the larger church is something that’s interested me for a while,” says Janzen, 28, who lives in Prince Albert, Sask. “My congregation’s small, so I think it’s important for us to be connected to other congregations, so [we] don’t forget who we are and why it is we do what we do.”

She is one of two representatives appointed by MC Saskatchewan to sit on the Joint Council, the group that replaced the former General Board and commissions following the restructuring of MC Canada last fall. As part of the 13-member group, Janzen helps determine nationwide priorities for MC Canada.

“I see Joint Council and the new national model as a really positive thing, and a really good way for everyone to be connected all across the country,” she says.

She’s no stranger to participating in the nationwide church, having grown up at Grace Mennonite Church, where she began taking an active role when she was 12, the same year she started fundraising to attend the Mennonite World Conference assembly in Zimbabwe.

“That was very exciting, to see Mennonites from all over the world, and to see again how different but similar we are,” she says of her time in Zimbabwe.

The trip sparked her passion for the global church. She continued participating in the church locally and beyond by joining the Saskatchewan Mennonite Youth Organization committee, travelling to the youth assembly in Charlotte, N.C., in 2005, and volunteering at Shekinah Retreat Centre in various roles.

Janzen teaches Sunday school at Grace Mennonite, where she was baptized and became a member on Easter Sunday three years ago.

Located 140 kilometres north of Saskatoon, Prince Albert is home to six provincial and federal correctional institutions. Corrections, as a result, is a topic that is hard to escape in the city. Grace Mennonite has long been involved with the justice system through things like prison visitation programs.

“It was just normal,” she says of the attitude toward prison visitation that she witnessed in her congregation when she was growing up. “It was just something you did.”

So when Janzen was asked to join the board of Parkland Restorative Justice, a faith-based charitable organization that runs a prison visitation program as well as a support program for high-risk sexual offenders who have been released from prison, she was happy to say yes.

“I’m a strong believer in no person [being] left behind,” says Janzen, who currently chairs Parkland’s board. “People are not disposable. People can change.”

“I think there are a lot of people in our corrections system that have come from trauma and come from addictions, and they just need to be treated like people—they need to be shown [kindness],” she says. “I think, as a church . . . we need to do that. It creates safer communities for everyone.”

Janzen’s worldview has been shaped in part by the extensive travelling she’s done. She’s travelled throughout the United States, Central America and Europe. “I’ve kind of prioritized travel,” she says. “I like experiencing other people’s cultures, and finding out what is going on that we don’t see on the news.”

When she isn’t working at her day job as an automotive service advisor, she enjoys being outdoors. She lives on an acreage outside of Prince Albert, where there are plenty of trails to walk along with her dog, and she likes to spend summers camping, canoeing and fishing.

Janzen says she is enjoying her work with the Joint Council, which has met three times so far.

She recognizes the diversity of people and congregations that make up MC Canada, and hopes the nationwide church can stay united no matter what it faces. “I hope that . . . we can get comfortable with being uncomfortable,” she says. “Even though we’re different and we may have different views . . . [I hope] we can still come together for the greater good, to do service work in our country and around the world.”

“Let’s work on what keeps us together,” she concludes. “[Let’s] celebrate our differences and just learn to work through them together.” 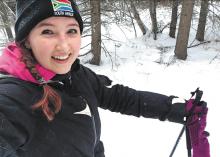 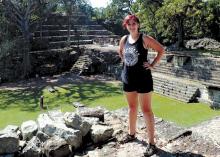 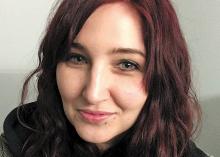 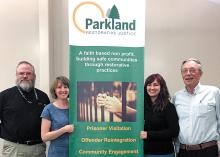 Jacquelyn Janzen, pictured second from right with Brad Taylor, Heather Driedger and Dave Whalley, volunteers on the board of Parkland Restorative Justice, a faith-based organization that supports prisoners and people who have been released from prison. (Photo courtesy of Jacquelyn Janzen)