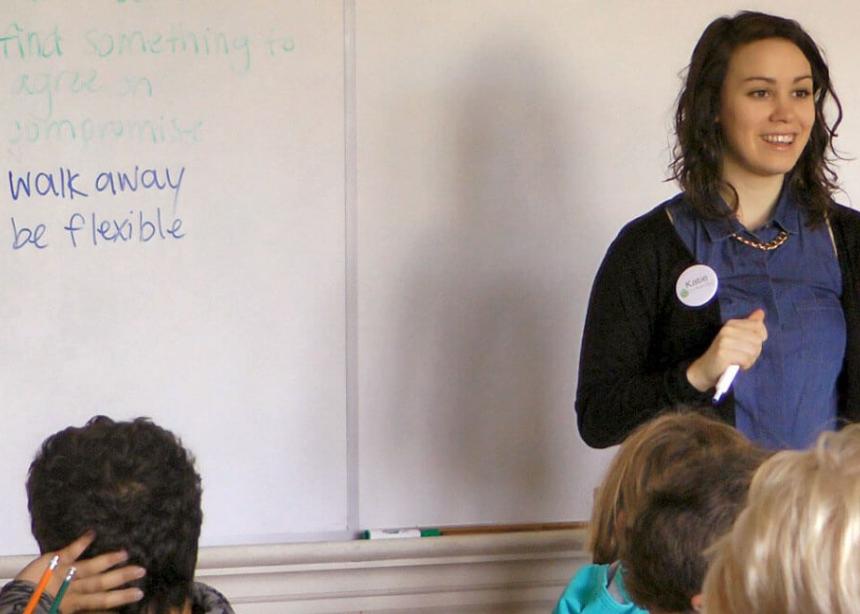 A young woman in Waterloo, Ont., is using her passion for peace to positively impact students.

During the course of six lessons that take place over six consecutive weeks, TREE facilitators teach students how to recognize conflict and resolve it peacefully. Facilitators use discussion, brainstorming sessions and hands-on activities, with the goal of having youth leave their classrooms with demonstrable conflict-resolution skills and an awareness of justice issues locally and globally.

TREE is a participant in the Frank and Helen Epp Peace Incubator in the Kindred Credit Union Centre for Peace Advancement at Conrad Grebel University College, Waterloo. It grew out of Gingerich’s work in 2014-15 as coordinator of Grebel’s Peace Camp, a week-long summer program for children to learn about peace and how it takes shape in their everyday lives.

“[During] this experience, I was seeing that peace education or conflict resolution done well in the classroom is really exciting to teachers,” she says. “It’s something they want to integrate into their classroom but don’t always have the time or resources to do so.”

Gingerich saw benefits to offering peace workshops in elementary schools year-round. TREE began taking shape in the spring of 2016 after receiving a grant from the Lyle S. Hallman Foundation worth $150,000 over three years.

As its director, Gingerich plans and promotes TREE, connecting with teachers and scheduling workshops. The workshops themselves are facilitated predominantly by a team of undergraduate students from Grebel and nearby Wilfrid Laurier University, although Gingerich does some in-class work as well.

This past fall, she and her team led six-week workshops in 10 different Grade 6 classrooms, for a total of 60 presentations.

A graduate of Grebel’s peace and conflict studies program, she says she never learned about conflict resolution during her grade-school education. “In university, it really struck me that . . . probably we should be learning about these things before we get to university,” she says, adding that she enjoys working with students: “I love getting to see those light-bulb moments. . . . I love getting to work with them and journeying with them as we figure out how to best solve problems that directly relate to them.”

One highlight from her work occurred in a classroom this past November during the week of the U.S. presidential election. Gingerich and her co-facilitator ended up disregarding most of that day’s lesson because the students wanted to better understand the election and talk about their thoughts and feelings about it.

The incident showed her that, although conversations like that can be difficult, they are necessary and can be rewarding. “Kids are out there, they’re hearing things, and they want to know [more] and they want to process,” she says. “Helping them really embrace what justice means, and making it real and applying it to real life, [is important].”

Paul Heidebrecht, director of the Centre for Peace Advancement, praises Gingerich’s work. “She’s passionate about trying to make a difference in her community, but, moreover, she’s thorough and hardworking, and creative in figuring out how to achieve that vision, which is often the unglamourous part of working for peace,” he says.

He calls Gingerich a “peace entrepreneur,” whose example shows that, for people interested in making a difference in the world, there are more options these days than studying international development or volunteering with Mennonite Central Committee. “With support, with dedicated effort, there are now opportunities for people to carve entirely new kinds of paths, entirely untraditional paths, and I think Katie is a great example of that,” he says. “To be honest, it feels like [TREE is] just the tip of the iceberg.”

Gingerich has been passionate about helping others ever since she was a child growing up in St. Agatha, Ont., something she attributes to her parents. “My parents are really selfless people, really caring people, and go out of their way to help others,” she says. “That was an important part of my upbringing.”

Her passion for social justice grew when she was in high school. “It was important for me to care about things bigger than myself; not to be focussed on trivial things in my own life, [but] to recognize that I am privileged and to recognize that I have power,” she says.

Today, she is looking forward to building TREE’s reputation as a peace organization. The goal right now is to expand into grades 4 and 5 starting in September.

“I’m looking forward to . . . being able to work in more classrooms with more grades, and to build up and equip students with conflict resolution skills,” she says.