Caring for the forgotten 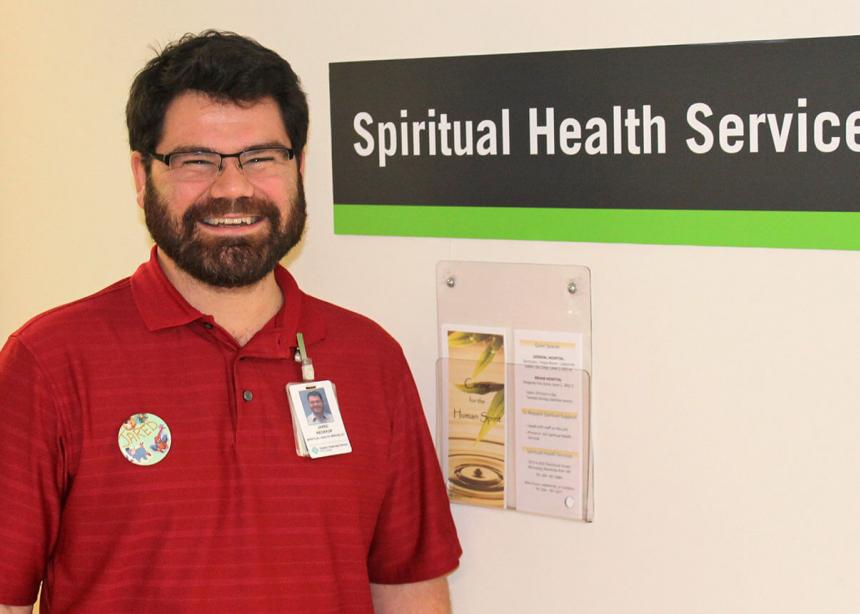 Jared Redekop provides spiritual care to patients and families at the Children’s Hospital of Winnipeg. (Photo by Aaron Epp)

Jared Redekop has seen and done a lot in just over a year of working as a spiritual health practitioner at the Children’s Hospital of Winnipeg.

One experience that most sticks out is when a family asked him to say a prayer at their teenage daughter’s interment. He had journeyed with the family, which was not religious, for the six weeks from when their 14-year-old was in an automobile accident to when she died.

“I have a special spot in my heart for that family,” he says. “I’m grateful that they allowed me into their lives.”

Redekop, 30, has worked at the Children’s Hospital since October 2015. As a spiritual health practitioner, he is there to support families both emotionally and spiritually. He’s there to listen, to pray with people or just to sit with them.

The Children’s Hospital is located on the campus of the Health Sciences Centre, the largest healthcare centre in Manitoba. Redekop, who attends Home Street Mennonite Church in Winnipeg, is part of a team of 10 spiritual health practitioners who work with patients and families from all faith backgrounds or those with no faith background.

Redekop recently led a smudge, an indigenous practice that involves purifying a room with the smoke of sacred herbs, for an indigenous family. Usually, Redekop would defer to an indigenous elder or family member to do a smudge, but since no one was available, he was happy to step in. “Some think a white person shouldn’t be leading smudges, but if it’s patient-care-centred, and it’s what they need in that time, I’ll do it,” he says.

Providing people with spiritual care runs in Redekop’s family. He grew up in Floradale, Ont., where his father Fred served as lead pastor at Floradale Mennonite Church for a quarter-century.

“That’s really what brought me to faith . . . having that community support of Floradale Mennonite Church and the examples that came from the community,” he says. “People were always volunteering, always serving, always giving of themselves.”

He travelled to the Philippines for six weeks, where he worked with a Christian ministry that serves the urban poor. This was followed by a six-week stint working in an orphanage in Ukraine, and one month working with Mennonite Disaster Service in Anahuac, Tex. A few months after that, he returned to the Philippines for a year, working with the same ministry he had served with earlier.

Eventually, Redekop returned to CMU, where he completed a degree in social science. At the same time, he began working half-time at Home Street Mennonite Church as the youth pastor. During his two years in that role, a teenager from the church was diagnosed with cancer. He recalls visiting the girl and her family in the hospital. He found doing pastoral care work in that setting particularly meaningful.

After finishing his work at Home Street, Redekop entered the clinical pastoral education (CPE) program offered through the Canadian Association for Spiritual Care. He began working at the Children’s Hospital after completing his first unit of training. Today, he works at the hospital four days a week, using the remaining time to pursue his studies.

“I really like the hospital because every day is different,” he says.

Working in a multicultural, multifaith environment has shaped his faith journey. “Growing up, everything was very black and white,” he says. Christianity was the one true faith, Jesus was the only way to God, and anyone who believed otherwise would go to hell.

As a result of his CPE training, and reading the works of Franciscan friar Richard Rohr, many of those beliefs have changed. “I would steal Rohr’s language and say I am more of a Christ-following mystic, rather than a Christian, knowing there are truths within Buddhism, within Islam, within Judaism, within traditional/indigenous faith,” Redekop says, adding, “Christianity doesn’t have a monopoly on the truth.”

At the same time, he still identifies as Mennonite. It’s growing up in the Mennonite church that taught him to care for those on the outskirts. “A lot of people, unfortunately, get forgotten at the hospital. They rarely get visitors,” he says. “That’s what pulled me into this work. It’s a pull that I’ve felt all my life to help the marginalized, the people who are forgotten.”

Jared Redekop provides spiritual care to patients and families at the Children’s Hospital of Winnipeg. (Photo by Aaron Epp)