Caring for creation, one ice cream pail at a time

Family of four limits garbage to one pail every two months 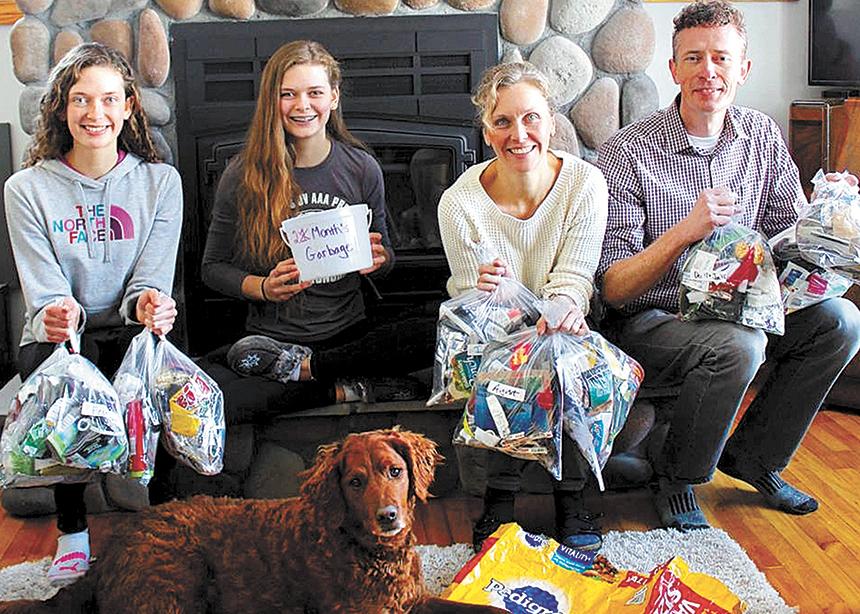 The Heppner Mueller family with their waste from 2017. Pictured from left to right: Kaija, Aria, Connie, Rick and their dog Juno. (Photo courtesy of Connie Heppner Mueller)

People hear every day about garbage mountains growing, icebergs melting and species going extinct. With every plastic bag and old cell phone people throw away, they are contributing to the problem. The average Canadian produces 777 kilograms of garbage a year, as of 2009.

But one family is striving to challenge the norm and get off this conveyer belt to destruction. The Heppner Muellers of Altona, Man., limit their garbage to one ice cream pail every two months. If by the end of the two months they have more trash than they can fit in one bucket, they donate $50 to charity.

Connie Heppner Mueller, a teacher at W. C. Miller Collegiate in Altona, says the family of four began their waste journey when they watched The Clean Bin Project, a documentary about people in Vancouver trying to live waste-free for a year, and heard about a couple in Ontario who limited one year’s waste to a single garbage bag.

“At first, these challenges seemed impossible, but they planted a seed in us and slowly we were reducing our waste,” she says. “Then it felt like it was time to do something that would push us further.”

The family, which attends Seeds of Life Community Church in Altona, a Mennonite Church Manitoba congregation, started by aiming to fill no more than one ice cream pail per month. At the end of each month they do a garbage audit, which means they sort through all the garbage they have collected, identify what they’re throwing away, and take a picture. After a while, they discovered by accident that they could stretch their goal to one pail every two months. Heppner Mueller says she disliked doing the garbage audit, so she often put it off for a long time. “All of a sudden two months had gone by and we still hadn’t filled it!” she says.

That doesn’t mean they don’t still face obstacles, though. Every few months the bags from their dog’s food put them over the limit because they haven’t been able to find garbage-free dog food. Even past choices affect them, like a damaged 10-year-old barbecue cover that now has to go to the landfill. Heppner Mueller says their waste challenge has caused them to think differently and to make more environmentally conscious purchases than they did a decade ago.

The family roots their project firmly in their faith. God has given them this beautiful playground, she says, through which they experience joy and wonder, adding that since it takes care of them, they are called to return that care.

People need to be environmentally conscious so they have less impact on the earth, she says, and they also need to get reconnected to the natural world. “I think technology, and maybe even living in the north, . . . separates us,” she says. “It’s time to remember that we are connected.”

One of the challenges of reducing waste is that it can take a lot of effort and time looking for garbage-free fruit or soap in bulk, for example, requiring visits to multiples stores instead of just one. Yet Heppner Mueller says this has also created relationships: “We have had to have conversations with farmers or with store owners and, you know, 99 percent of those conversations have been really positive, and people are just encouraging and cheering us on, and maybe changing their own habits too.”

The family members also document their journey on social media, posting a photo of each garbage audit and other tips and questions from their project. They decided to go public with their experiences not because they wanted to show off their project, but to spark conversation and get more people thinking about their own personal waste.

“We’re still on the journey of taking steps but we’re certainly not perfect yet,” she says of their efforts. “Sometimes we make compromises and say, okay, yeah, we’re having chips today, and it came in a foil lined bag and that sucks.”

But people have told her that her family’s story is more accessible because they do still eat chips and take steps that seem attainable to those following their journey. She says people in her community have started asking her questions, like how to compost and what can be recycled.

Awareness is the first step to waste reduction. Heppner Mueller advises people to start with a garbage audit and pick one thing to eliminate from their trash can.

See also:
‘People can do this’
‘I eat your garbage’
From garbage, beautiful music comes 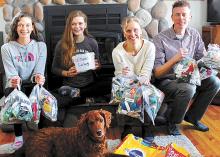 The Heppner Mueller family with their waste from 2017. Pictured from left to right: Kaija, Aria, Connie, Rick and their dog Juno. (Photo courtesy of Connie Heppner Mueller) 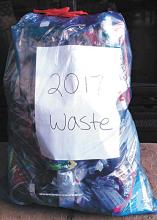 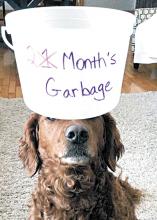 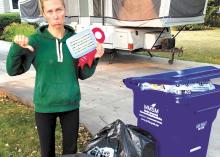 Connie Heppner Mueller stands behind an extra pile of garbage that amounted to more than all the rest of their 2017 waste, due to garbage left behind by workers during a small renovation and a downsizing of old keepsakes. She says that without it, the first picture isn’t quite truthful. (Photo courtesy of Connie Heppner Mueller)