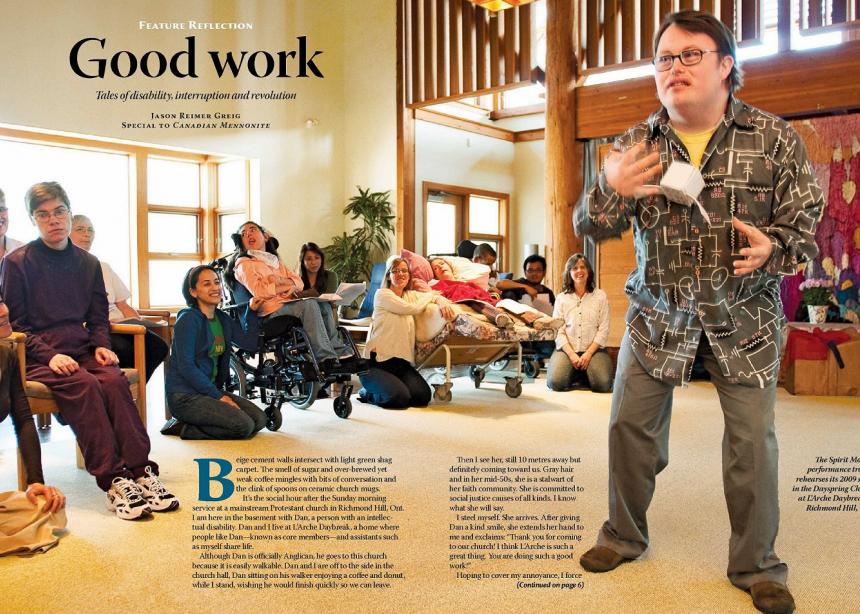 Following two days of keynote addresses, seminars, workshops and a closing banquet at the Canadian Church Press Convention, held in Toronto from April 30 to May 1, 2015, member publications anxiously awaited the presentation of 49 Awards of Merit for work published in 2014.

Canadian Mennonite’s first award of the evening—and only first-place award—came early, in the open Department category, defined as “space set aside within a publication to address a specific subset of readers.” Young Voices is edited by Aaron Epp and Rachel Bergen, and written by a wide variety of young adult writers. The judge declared Young Voices “works because it matches up entirely with the intent of recognition inherent in this category. Youth is specifically addressed and appropriately by other youth . . . . There is a good variety of reporting and opinion and event listings relevant to the readership are included. There is visual appeal with numerous photos, and contemporary and relevant topics are addressed.” The award was for the Sept. 1 and 15 and Nov. 24 issues.

“I was in prison: The story of a farmer, a sex offender and the choice of friendship over fear” by the pseudonymous author John Penner and edited by Dick Benner, editor/publisher, and Ross W. Muir, managing editor, claimed second place in the Personal Experience/First Person Account, Circulation above 10,000, category. “It’s a good story with loads of detail and an authentic sense of realism about possibilities,” the judge stated. “The author has a way with words. I’d like to read more.” It was published in the March 31 issue.

“Good work: Tales of disability, interruption and revolution” received two Graphics awards: a second place in the Feature Layout and Design, Magazine, Circulation Above 10,000 category, for designers Muir and Dan Johnson, and a third place in the Feature Photo, Magazine category, for photographer Michael Swan. Of the layout, the judge remarked, “[T]he opener is a marvellous example of the harmonious integration of words and pictures. As well, this layout has paced its additional elements well . . . and because of this pacing, and the use of colour, everything has been wrapped in a nice bow.” Regarding the photography, the judge praised the “very impressive control of light in a very difficult setting. With all the back lighting coming in to the image, the way all faces, expressions and details were rescued is remarkable.” It was published in the Sept. 1 issue.

Canadian Mennonite’s final award came from the pen of senior writer Will Braun for his “MCC Manitoba stands with Buffalo Gals” in the Opinion Piece, Circulation Above 10,000 category. “The piece is clear, detailed, fair and opinionated,” stated the judge. “It is a nice combination of fact, perspective and opinion.” With Braun known for his strong opinions in the pages of this magazine, it was interesting that the judge noted that, “while the fairness is admirable, the key point of the piece—that Christians too often view issues from a white Euro-centric perspective—loses a bit of its potential impact through excessive balance.” It was published in the Dec. 15 issue.

This year’s CCP convention and awards ceremony were shared with members of the American-based Associated Church Press, whose Mennonite members—Mennonite World Review and The Mennonite—each received a number of awards.