Canadian faces of MDS in Texas 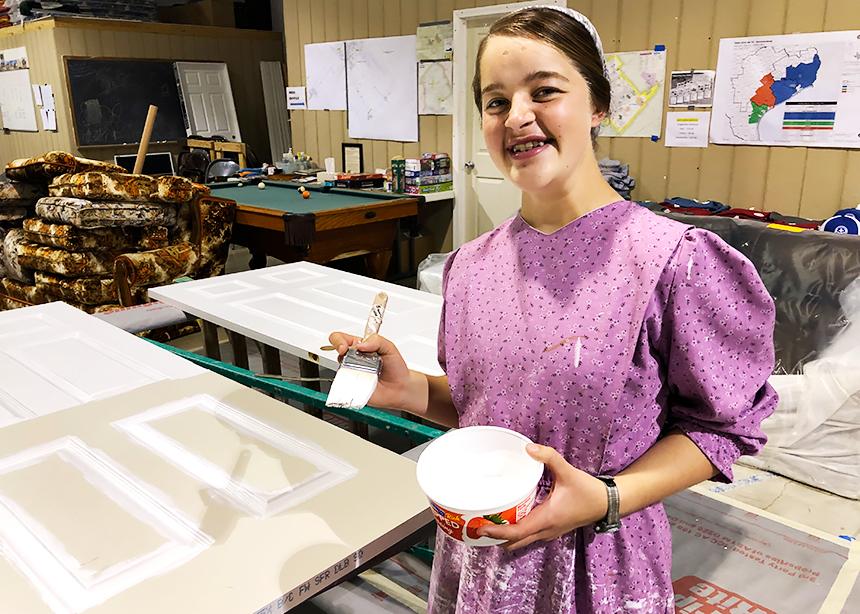 What do you get when you put Mennonites from all over Canada, and from all sorts of different Mennonite conferences and churches—along with Christians from other denominations—in the same place? A Mennonite Disaster Service (MDS) unit—that’s what.

In February, I visited volunteers in three communities in Texas hit by Hurricane Harvey in 2017—La Grange, Bloomington and Wharton.

Despite their differences of age, locale or theology, none of them mattered. They were there for only one reason: To show the love of God by helping people affected by a natural disaster. As Jeanne Wollf of Hague, Sask., put it about doing MDS: “We like how everyone leaves all their differences at the door, how they have come here for a common goal.”

They are the Canadian faces of MDS in Texas.

Pushed out of their comfort zone

For Karen Harder of Morden, Man., MDS is “pushing me out of my comfort zone.” Sara Dyck of nearby Plum Coulee likes “the physical labour, and meeting other people.”

Harder, 21, and Dyck, 19, are part of Pursuit, a four-month discipleship training program at Steinbach Bible College.

“Building a house is a new thing for me,” says Harder, noting that her brothers have done MDS before.

Dyck says she has wanted to do MDS “for a long time. I love that I get to go somewhere new and help people.”

Healing through giving back

Errol Stein, 77, met Mennonites for the first time in 1997, when he came from Ontario to Manitoba to help with recovery efforts following the “flood of the century” in that province. A Roman Catholic, he spent six weeks in Manitoba as a Red Cross volunteer seconded to MDS.

“It was a great experience,” says the retired insurance broker who lives in Toronto. So great, that he decided to do it again. “I’m happy to be here. I have been blessed abundantly by God,” says Stein, a widower. “I want to do God’s work, that’s the main thing for me,” he says of his month in Texas as a crew leader.

Service a family affair for Canadians

For the Wiebes of Austin, Man., service with MDS is a year-long family affair.

The first time Dan and Pamela, members of the McGregor Sommerfeld Mennonite Church, did MDS was in 2000, before they had children. “When Dan suggested it, I thought, no way,” Pamela says. “But the Lord led us to a place where we could see how everything would work out.”

As for the children, they are enjoying it. Since they are homeschooled, they aren’t missing their education—although it is a different kind of learning this year.

For Brianna, the year is a way to “see new parts of the U.S. and Canada, meet new people, learn new skills and escape winter.” Being away from friends isn’t easy, but the time spent serving others is “also a blessing,” she says. “I am glad to help others, be a light and show God’s love. My joy comes from serving others. It’s a way to share my blessings.”

After Texas, next up is service in South Dakota, at Pine Ridge. After that? Maybe to Newfoundland, or somewhere else in North America; they don’t know.

Dave and Jeanne Wollf of Hague, Sask, are “hooked on MDS.” That’s how Dave, 57, puts it about the way he and Jeanne, also 57, view service with MDS. “It’s a family affair for us,” Dave says.

In February, the couple, who attend the Blumenheim Bergthaler Mennonite Church, were in Bloomington with their son and daughter-in-law, Jason and Heidi.

“We are fortunate and blessed, and can give back to help others,” says Jeanne.

When their kids were younger, they liked the way doing MDS gave them a chance to work  and interact with adults, learn from people who “believe all the same ways we do,” and “not just think about themselves.”

The couple left their three children at home this year but took them to an MDS family camp in 2018.

Kevin, 40, works for a property management company. For him, MDS is a way “to give back and get to know other people.” A self-described non-people person, he says that MDS is also a way to “get out of my comfort zone.” He adds, “It’s great to be with people who all share the same faith, even though there are differences.”

The first time Kevin Shantz signed up for MDS, the organization said he was going to Hawaii.

“I thought it was a joke,” says the roofing contractor from southwestern Ontario, who takes several months off each winter. Since then, the married father of two daughters has been to California, Saipan and now Texas, usually going for three weeks at a time.

Why does he do it? Escaping winter for a bit is one reason for the member of Drayton Community Mennonite Fellowship, but there’s more. Stretching out his arms, he says, “I have hands. I can work. I can help my neighbours. I don’t want to sit on a beach when people are in bad shape and need help. The least I can do is help them.”

For Ingrid Hughes of Canning, N.S., it is “very rewarding to serve God in such a practical way” with MDS.

Together with her husband Ralph, a retired mechanic, she was in Texas for five weeks. It was the first time with MDS for her, and the second for him.

“I like how well everyone works well together towards a common goal,” says Ingrid, 62, who used to own a home- cleaning business. What makes it more satisfying is the work is being done to “help those affected by situations beyond their control,” she adds. “We can help them, support them, pray for them.” 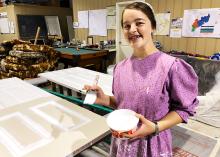