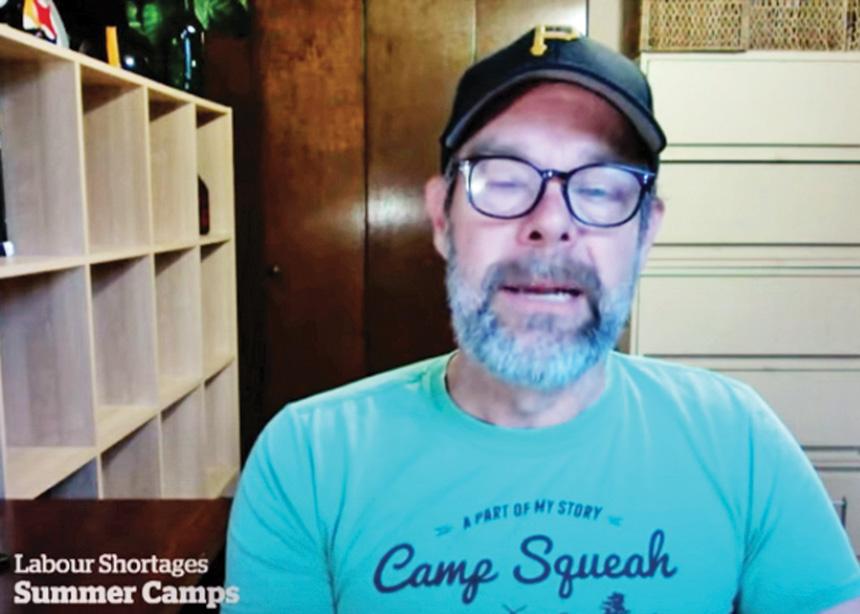 Rob Tiessen of B.C.’s Camp Squeah is interviewed on a CBC news broadcast, telling how camp attendance has been affected by fewer staff this summer. (Screenshot of CBC news clip on YouTube)

Rob Tiessen, executive director of Camp Squeah in Hope, B.C., was interviewed on CBC television’s The National broadcast on June 20 in a story about summer-camp staffing shortages across the country.

“We don’t have the adequate supervision to run this number of kids and we might have to turn people away, which is a heartbreak, and we hate that!” said Tiessen in the interview. He attributed the shortage in part to the pandemic, which curbed on-site training on which camps rely, and to the “demographic of young adults who found out there were other opportunities [for summer employment].”

Although Tiessen was speaking on behalf of the B.C. Camping Association, the Zoom interview turned out to be an unexpected promotion for Squeah itself.

“Originally, Stephen Jackson, president of the B.C. Camping Association, was scheduled for the interview, but at the last minute he reached out to me to ask me to represent on his behalf,” says Tiessen. “I was intending to represent B.C. Camping in my responses, and communicated thusly in my Zoom conversation with him, but when the edited version eventually aired, it came across more like I was speaking only for Squeah. Interestingly, without our knowledge or consent, they captured footage from our website and used it as background footage. This further served to focus my truncated comments on Squeah specifically.”

Although Camp Squeah is back to running regular summer programs for children and youth this year, there are some limitations.

“We’ve had to cap registration numbers due to insufficient staff numbers for various weeks,” Tiessen says. “There are still holes we’re praying to fill later this month and in August.”

A vigorous recruiting campaign, including social media channels, magazine advertisements, and church bulletins helped secure the staff who have come on board.”

Tiesssen says prayer and encouragement for summer camp staff are always welcome: “Pray that we don’t get discouraged when tired, that we don’t get sick if/when COVID-19 is in the air . . . that grace would abound and that our energy levels would match the needs of the campers, and that ultimately God’s Holy Spirit would be touching the lives of both campers and staff this summer.” 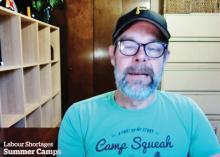 Rob Tiessen of B.C.’s Camp Squeah is interviewed on a CBC news broadcast, telling how camp attendance has been affected by fewer staff this summer. (Screenshot of CBC news clip on YouTube)