Camp Moose Lake, one of Mennonite Church Manitoba’s three Camps with Meaning (CwM) locations, has been sold to the Division Scolaire Franco-Manitobaine. Possession date for the camp, located in the southeast corner of Manitoba near the community of Sprague, is set for Sept. 29, 2017.

“We are so thankful for the incredible ministry that has taken place at this location. We know it has been holy ground for campers, volunteers and staff,” says Ken Warkentin, the area church’s executive director. “It has been so good, and it’s also good to look forward to refocussing this same kind of passion across a more sustainable footprint.”

CwM began with one location, Camp Assiniboia, near Headingly, in 1949. Passionate regional groups oversaw the beginning of Camp Moose Lake in 1957, which was then joined by Camp Koinonia, in the southwest part of Manitoba near Boissevain, in 1966.

It has been a challenge for MC Manitoba to operate three locations in the landscape of decreasing volunteers and resources, while summer camp options for children and youth have exploded.

“Longtime Camp Moose Lake supporters will certainly be disappointed, although many of us have been preparing ourselves for this reality for some time,” says Darryl Neustaedter Barg, the area church’s associate director of communications. “Camp Moose Lake is where I took all I learned from home, church and school, and made my faith my own. It’s where I learned to play guitar and lead singing. I know others had similar life-changing experiences. That said, I’ve also learned that our camping ministry is more about the people and how we use our resources than a particular location.”

Camp Moose Lake and Camp Koinonia are leased from the provincial parks in which they are located, so the sale value reflects building and equipment only. The Camp Moose Lake deal does not include the iconic timber frame picnic shelter that will be disassembled and moved to Camp Assiniboia.

A celebration service is being planned for Camp Moose Lake at the camp on Sept. 24, 2017. For more details online, visit mennochurch.mb.ca. 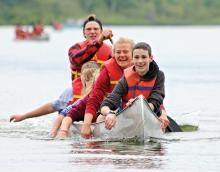