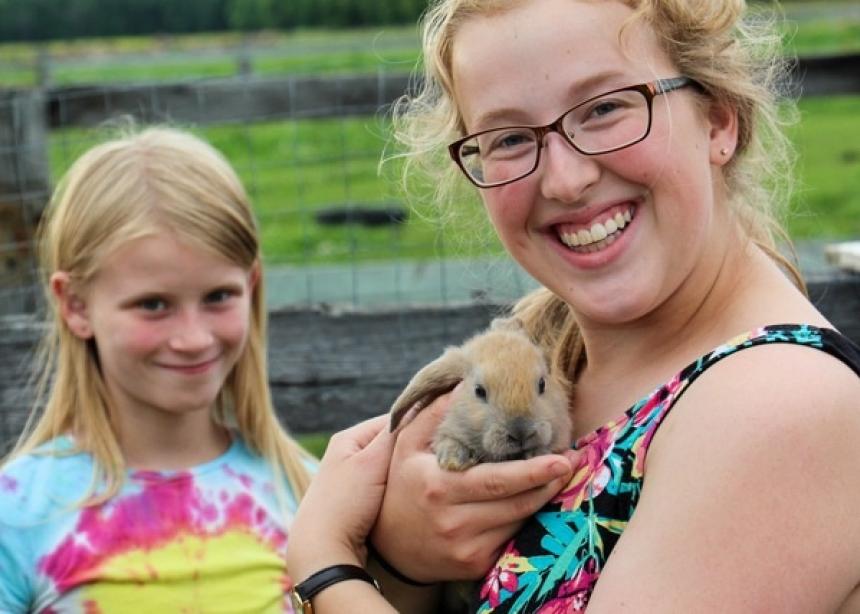 Picture gleeful campers chasing squawking chickens back into their pen, and others exclaiming with delight as they bite into freshly picked tomatoes, juice dribbling down their chins. This is what a typical day at camp looked like for me this summer—days that were never actually typical but always full of new adventures.

This summer I was the nature instructor at Camp Assiniboia, one of three camps that make up Camps with Meaning, a ministry of Mennonite Church Manitoba. Being in this role meant I had the privilege of working outside and experiencing, alongside campers, the bountiful gift that is God’s creation.

Camp Assiniboia has recently developed a farm program, which consists of several large gardens and a variety of animals. In my lessons I taught campers how to compost and care for a garden, and I got to share in the joy of campers holding small, fluffy rabbits for the first time.

One experience from this summer that to me captures camp’s essence came on a sweltering, cloudless day. Part of the nature lesson that day was to harvest potatoes and bring them to the camp kitchen. As we trudged out to the farm, campers’ complaints about the heat and the bugs inevitably began to pepper the conversation. By the time we reached the farm, the midday sun beating down on us, many campers were becoming distracted and doubtful of our mission.

However, after I explained how to pull a potato out of the ground properly, and campers began to try it for themselves, a transformation started to take place. One by one, children’s shouts of triumph and delight rose from the potato patch, as they began to unearth not one, not two, but five potatoes from one plant!

Soon campers were eagerly moving from plant to plant, excited to discover the treasure they protected. One camper who had refused to participate in the activities just half an hour before ended up being the most reluctant to leave the patch at the end of the activity time.

Camp is a place where staff and campers alike are able to discover and wonder at God’s awesome ecosystem. It is here in creation that many people experience God in a way unlike in any other place or time in their lives. Camp is an incredibly important ministry that keeps the church alive for many young people.

Whether it was through eating vegetables I grew with my campers, digging through compost, or seeing God in new ways alongside campers and staff, my summer at camp was one of delighting in and sharing the beauty, peace, and hope of God’s creation.

For more information on Camps with Meaning, see here.

Other Focus on Camping stories:
‘So supported’
The beauty in difference
I can’t wait for summer’
Peace Camp 2016 was a huge success!
A front-row seat
A special faith-based community
Silver Lake takes steps to deepen faith formation