Catching a glimpse into the end of the story 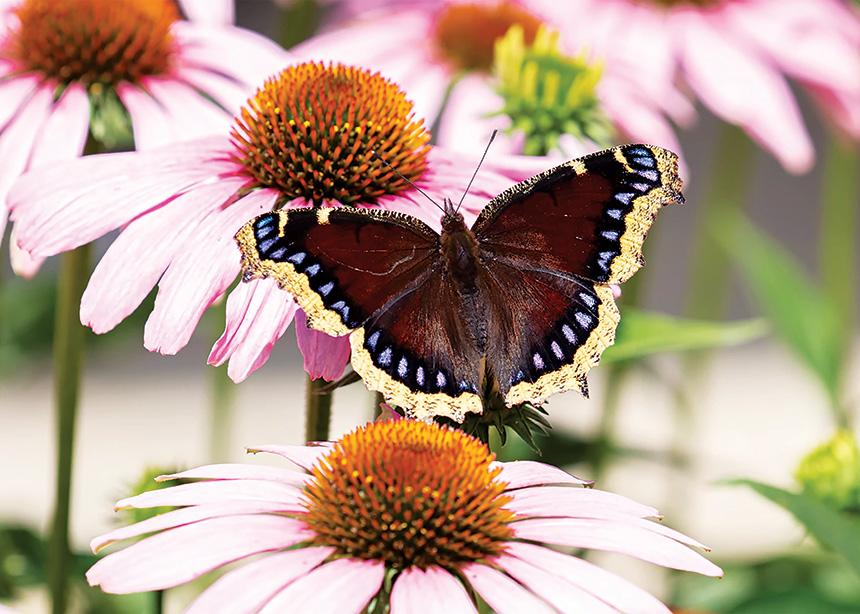 Mary Magdalene couldn’t have known the end of the story—how things would turn out. How could she?

She, and the rest of the disciples, were no different from the rest of us. The future is cloudy at best. We don’t know what the next day will hold. Back then, no one saw the resurrection coming. Today, we see the signs, looking back at that first Easter, hearing the story of that morning through the voice of the gospel writers. It is all right there, but hidden in plain view—the empty tomb, the linen wrappings lying there, the angels, Jesus himself standing before Mary.

Even before this, Jesus had told the disciples that he would die and in three days be raised from the dead. But Mary could not see it; she could not put it all together.

All Mary knows is where she needs to be in that moment. So, it is no surprise that early in the morning she is at the tomb weeping for the Jesus she loved, caring for his memory and for his body by bringing spices. She is living moment by moment and doing what she can to hold on to the hope she had experienced through her living encounters with Jesus, the embodiment of good news.

How could she even imagine the end of the story standing right in front of her? Not until Jesus called her by name did everything suddenly come into focus, move from hope to reality, from sadness to utter joy. Even then, Mary could not hold on to Jesus, but she could tell the others and share this good news and the transformational power of God. Through the Resurrection of Jesus, Mary was called to a deep living and a deep hope.

On this Easter morning, an Easter after a tough and trying year, we celebrate the Resurrection of Jesus; we join Mary in the call to deep hope and deep living, and we proclaim our trust in the end of the story.

A story of hope

During the Vietnam War, James Stockdale served as a vice admiral and aviator in the United States navy. On Sept. 9, 1965, his plane was shot down in North Vietnam and he was captured by the Viet Cong. They held him for seven-and-a-half years in the brutal Hoa Lo Prison or “Hanoi Hilton” as the American prisoners of war called it.

There, Stockdale endured solitary isolation, torture, beatings, broken bones and unimaginable suffering. He also became a leader among the POWs. Somehow, he endured those years, was released and went on to a full career back in the United States.

Stockdale was once asked how he survived those difficult circumstances. This is what he said: “I never lost faith in the end of the story. I never doubted not only that I would get out, but also that I would prevail in the end and turn the experience into the defining event of my life, which, in retrospect, I would not trade.”

The interviewer then asked who didn’t make it out. “Oh, that’s easy,” said Stockdale. “The optimists. Oh, they were the ones who said, ‘We’re going to be out by Christmas.’ And Christmas would come, and Christmas would go. Then they’d say, ‘We’re going to be out by Easter.’ And Easter would come, and Easter would go. And then Thanksgiving, and then it would be Christmas again. And they died of a broken heart.”

Stockdale saw this as an important lesson. “You must never confuse faith that you will prevail in the end—which you can never afford to lose—with the discipline to confront the most brutal facts of your current reality, whatever they might be.”

This attitude has been called the “Stockdale Paradox”—living day to day, in the moment, in full reality, but holding onto hope for the end of the story.

I first heard about the Stockdale Paradox from consultant Betty Pries, who shared it with a group of pastors in a session on what it means for us as church and society living during the COVID-19 pandemic.

She used this story to ask about how we were doing in that day-to-day basis, despite all the pandemic challenges. But she went on to ask how we are also holding onto the end of the story, not knowing when and how the pandemic might end, but also holding onto that larger story of God and the kingdom of God promised—something already here and yet to come.

Betty drew on the writings of Christian author Cynthia Bourgeault and her book, Mystical Hope: Trusting in the Mercy of God.

So often we have what is called “outcome hope”—we hope for a very particular outcome in the future, and we need things to turn out that way for us to be happy. It is like that false optimism Stockdale talked about. Then, when things do not turn out how we had hoped, when it is a different outcome, we become unglued.

Rather, Christian faith calls us to a “mystical hope.” Bourgeault writes, “The spiritual life can only be lived in the present moment, in the now. . . . Hope fills us with the strength to stay present, to abide in the flow of the Mercy no matter what outer storms may assail us. It is entered always and only through surrender; that is through the willingness to let go of everything we are presently clinging to. And yet, when we enter it, it enters us and fills us with its own life—a quiet strength beyond anything we have ever known.”

Easter calls us to this kind of mystical hope, rather than an outcome hope. To a hope that calls us to live deeply into the moments and days we find ourselves in, knowing God is with us even when it is very hard. This kind of hope holds on to the end of the story, trusting that God will bring us into promises yet unknown, into the kingdom not yet arrived.

It is a paradox: living in the “already and the not yet.” It is holding together deep living and deep hope. It is proclaiming God’s mystical hope, remaining anchored in the “now” while also keeping our eye on the horizon.

We see this in Isaiah 25:6-10. Amid the defeat of a nation, and a horrible exile filled with much suffering, the prophet Isaiah dares to dream and dares to practice a courageous imagination. He can imagine the end of a story, when there will be a great feast on the mountain, for all peoples on earth.

Isaiah names the shroud cast over the peoples, the disgrace and the long time of waiting. This is not sugar-coating the present situation. But the waiting is for a grand, expansive picture of salvation that is for all peoples, with death swallowed up forever and everyone partaking in a feast of delight. This very hope makes a difference in how the people live in the here and now.

We see this mystical hope in Mary, early on that first Easter morning. Through the pain and loss of Jesus, Mary goes to the tomb while it is still dark, follows where love has led her to offer her care, her prayers and her presence. In the unexpected greeting and recognition of Jesus, Mary sees the Lord and glimpses the end of the story. She sees the Resurrection power of life given from God, and she becomes a witness in the here and now.

There is a mystery in this act of going deeper and a hope that life will spring forth. It is like the caterpillar, changing into a butterfly over time. In the cocoon, the caterpillar trusts the deep transformation that is happening without knowing what the end might possibly look like.

Can we see this in the here and now of our own lives?

At Easter, we are called into this mystical hope. We are called to live deeply, facing the challenges and the pain of this time, holding them with the trust that God is here with us, that God’s kingdom has already begun.

God also calls us to a creative and even wild imagination that dares to glimpse into the end of the story. It is an end we can’t see clearly, but it is an end where all can feast with God on the holy mountain, an end where the fullness of God’s kingdom comes to fruition. That end is wrapped up in the Resurrection power of God to give us life.

We sing with the beloved hymn: “This joyful Eastertide / away from sin and sorrow! / My love, the crucified, / hath sprung to life this morrow. / Had Christ, who once was slain, / ne’r burst his three-day prison, / our faith had been in vain. / But now hath Christ arisen, arisen, arisen!”

We have seen the Lord! Deep living and deep hope!

Mark Diller Harder is a pastor at St. Jacobs (Ont.) Mennonite Church. This is an adaptation of a sermon he preached there on April 4, 2021.

1. Can you remember a time when you were in despair, feeling there was no hope? Looking back now, were there signs of hope that you simply could not see at the time? What are some ways that we can encourage others when they feel hopeless?

2. As you consider the story about James Stockdale, what is the difference between being optimistic in hard times and having faith that you will prevail in the end? What does it mean to have “discipline to confront the brutal facts of your current reality”?

3. Mark Diller Harder says that Easter calls us to a mystical hope that he compares to a caterpillar changing into a butterfly. If you were a caterpillar, what might you be thinking as you struggled to emerge from the chrysalis? Why is this hope “mystical”? What do you imagine the end of time will be like?

4. The Apostle Paul frequently reminds his readers of the hope they have in Christ. What specific things is he referring to? How would you express your hope in Christ? Which Easter hymn best expresses your hope? 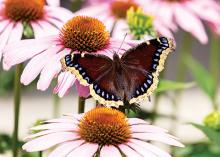 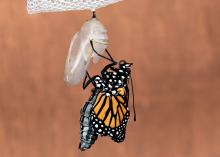 It is like the caterpillar, changing into a butterfly over time. In the cocoon, the caterpillar trusts the deep transformation that is happening without knowing what the end might possibly look like. (Photo used with permission by Merri-Lee Metzger) 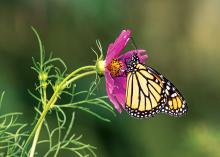