Called to care for the Earth 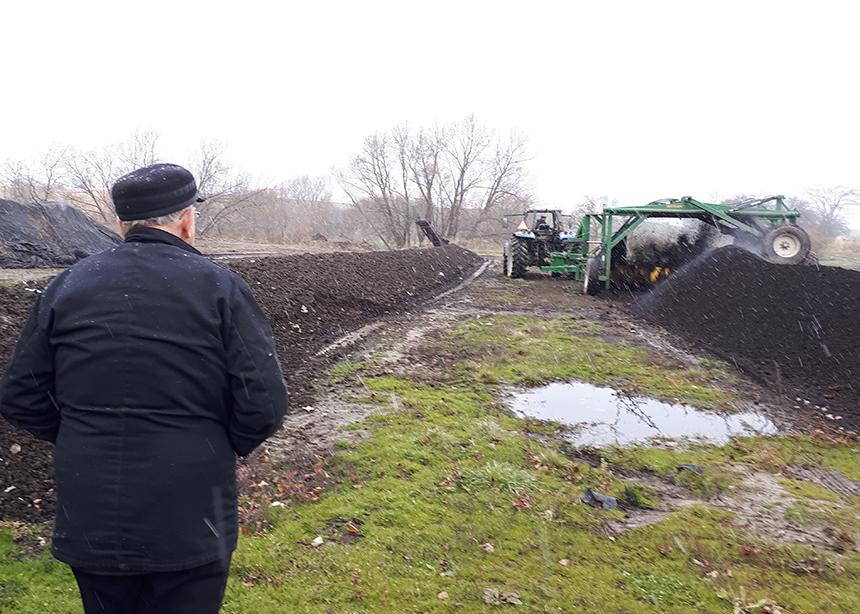 Edwin Sittler, an Old Order Mennonite, watches as a machine he designed turns a windrow of compost. (Photo by Janet Bauman)

This fall, Baergen and her family were in Ottawa for a speed skating competition. They decided to go on to Montreal to join the climate strike on Sept. 27 that featured Greta Thunberg, the Swedish teen climate activist. Baergen was inspired by her speech, saying, “She’s 16 like me. If she can do something, I can, too.”

It turns out Baergen has a supportive mentor at First Mennonite Church in Kitchener, who shares her passion for creation care. Julie Moyer Suderman described how they read a book together on climate change but were disappointed. “It was a lot of talk,” said Moyer Suderman. So the pair decided to act. With encouragement from Rene Baergen, pastor and father of Noa, they invited people at church to join them. Twenty people signed up, and First’s Climate Action Working Group was formed. The youth-mentor pair leads the group.

At their first meeting, members brainstormed actions that individuals, households and the church could take to care for creation and mitigate climate change. There are “really encouraging ideas we could make real,” Baergen said.

At the second meeting, they began to “move from brainstorming to put wheels on,” said Moyer Suderman. People have different passions around climate action, including food production, transportation, political advocacy, energy use and waste reduction. At their next meeting they will divide into interest-based groups to actually get things done.

Baergen is blunt about her motivation for action. “I love the Earth,” she said. “I don’t want us to ruin it.” She praised Thunberg for challenging politicians. “Someone needs to do that. . . . A lot of people my age who care about this are disappointed,” she said, referring to the pace of change on climate action.

“We are called to take care of the Earth,” Moyer Suderman added, “and to give hope in the midst of all this.”

Glen Woolner, who joined First’s Climate Action Working Group, looks to an Old Order Mennonite friend, Edwin Sittler, for inspiration on creation care. Woolner took a group from the church to visit Sittler Compost Equipment on a nearby farm. Sittler, whose formal education ended at Grade 7, is a self-taught student of the soil, inventor and entrepreneur, who designed large-scale composting equipment that is sold globally.

Around a table in the farmhouse, Sittler, who is almost 80, told the group the story of how he became motivated to “farm without chemicals.”

After attending an ecological farmer’s meeting, he said he got “excited by the biology, . . . bought a pile of books and read almost non-stop for a while.” He experimented with compost recipes and attended conferences on soil management, concluding that sustaining healthy soil means protecting its biodiversity.

He is amazed at the intricate workings of the “biological system God made to nourish the soil,” and he said that people need to “work in harmony with it.” After looking at nematodes under a microscope,  he said he was in awe. There is so much going on in the soil, he says. “I want to know who’s there and who’s doing what.”

Sittler’s recipe for compost is simple: straw, manure and green matter, with room for variations, like wood chips or leaves. He also uses minerals to help activate the soil’s microbes.

Turning a large pile of compost is labour-intensive, so Sittler began tinkering with a machine to do the job. Now, in local shops, workers build several sizes of composters to be pulled behind a tractor, that can turn long windrows of composting material frequently.

“Fifteen turns is my rule,” he said. In a matter of six weeks, he has humus—rich, black, healthy food for the soil. He told many stories about crops fertilized with compost outperforming crops grown in the conventional way.

He gave the group a tour of his compost mixing facility, and the shop where parts of the composters are made. Finally, he took the group out to a field to demonstrate his machine at work. In no time at all, the paddles on a spinning cylinder flipped over a windrow of compost.

As the group marvelled at the machine, he was quick to assure them that composting can be done on a smaller scale. “You can do it in an apartment with a five-gallon pail,” he said.

Sittler and Baergen span the age and cultural spectrum of Mennonites, yet both are inspiring climate action at First Mennonite. 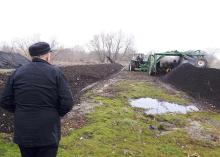 Edwin Sittler, an Old Order Mennonite, watches as a machine he designed turns a windrow of compost. (Photo by Janet Bauman) 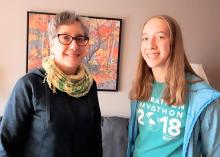 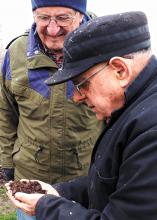