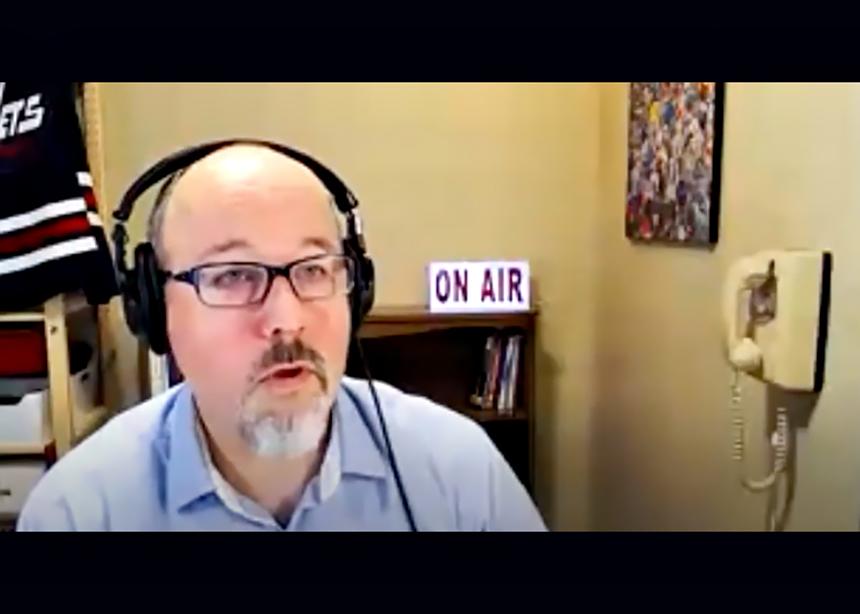 CMU faculty David Balzer, a key figure in launching the radio-style show, has more than a decade of experience working in broadcast radio in Winnipeg. (Screenshot by Nicolien Klassen-Wiebe)

When Russia invaded Ukraine in February, Karen Ridd was struck by how many people around her immediately called for military troops to be sent.

“In those moments it becomes really hard as a pacifist to find ways to speak into that conversation, when we know there are atrocities happening,” says the Menno Simons College instructor and peace activist. “Yet I also don’t want to chuck my beliefs out the window and be silent in these moments.”

It got her wondering if there is a role for nonviolent resistance in a situation of open conflict like Russia-Ukraine?”

Ridd isn’t new to these kinds of questions, with more than 30 years of experience practising conflict resolution and nonviolent action. She is a teaching associate professor of conflict-resolution studies at Menno Simons College, the downtown campus of Canadian Mennonite University (CMU) in Winnipeg.

She brought her idea for a series of interactive discussion events to David Balzer, CMU’s associate professor of communications and media, and together they launched, “We Need to Talk: Voices of Nonviolent Resistance.”

The interactive call-in show is hosted by video conference, inspired by the classic style of radio program that allows listeners to call in with questions. It has featured several guest speakers and so far has covered topics like women and nonviolent action, bringing home peacebuilding learning from abroad, and the conflict in Ukraine.

“We’ve tried to be intentional about how we set up the conversations,” says Valerie Smith, co-founder and former co-director of CMU’s Canadian School of Peacebuilding (CSOP). “It’s not intended to be a debate, but it’s also not intended to avoid disagreement or difficult conversations.”

“I love hearing the stories of nonviolent action and peacebuilding,” she adds. “I find it really inspiring and such a helpful counterpoint to the mainstream narratives around violence and military and fear of the other.”

Smith hosts and produces the show along with Ridd; Wendy Kroeker, associate professor of peace and conflict transformation studies and academic director of CSOP; and Darryl Neustaedter Barg, media production coordinator and adjunct professor of communications.

The first episode in April, hosted by Ridd and Balzer, was a hit, with Balzer using his more than a decade of experience working in broadcast radio to help guide the conversation for the many participants who tuned in. When health issues put the project on hiatus for several months, and required a reconfiguration of the team, Ridd wondered whether they should continue. But when they thought of the countless other issues going on in the world in addition to war in Ukraine, they affirmed there was value in having more conversations. They resumed the series in October.

“The mainstream narrative around the world is that violence solves our problems,” Smith says. In this kind of world, nonviolence is countercultural and often unpopular. Even Ridd considered nonviolent resistance naïve and pointless well into her young adult years.

Ridd grew up in a non-pacifist, United Church-going household with extended family members who fought in the world wars, or desperately wanted to, and a father who was a chaplain with the Canadian Armed Forces.

It was only after years of working in Nicaragua, El Salvador and elsewhere in Central America, doing human rights work amidst the civil wars of the 1980s, that Ridd became committed to nonviolence. There she saw the undeniable differences their nonviolent actions were making, even when simply being an outside presence observing injustices.

She says she learned that “it’s one thing to feel like [nonviolent action] is the right thing and then to realize it’s actually the most effective thing. Not [only] from a moral perspective—if you want to win this struggle, you’ve got to be thinking about this.”

She says there is a lot of ignorance when it comes to the possibilities of nonviolent action:

“Have you really taken nonviolence to its edges?” she will often reply. “Why are we quick to ask about those edges for nonviolence but we don’t explore them for violence? . . . If we’re going to interrogate one we have to interrogate the other with a similar set of questions.”

Kroeker was on sabbatical in Europe when Russia invaded Ukraine. She joined “We Need to Talk” because she had spent months immersed in conversations with European Mennonites and others about the conflict.

All three hosts emphasize that nonviolent resistance is something any person can do. Whereas violent action requires specific skills, equipment and money, and has only a small sector of people able or willing to do it, nonviolent action is cheap and accessible to every age group and ability.

“The work of peacebuilding, difficult conversations and nonviolent action—this is not just work for experts, this is work for everybody,” Smith says.

Upcoming episodes will address how to have conversations with people who have different beliefs, peacebuilding and the arts, and more. Find them at cmu.ca/community/nonviolent-resistance. 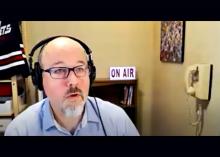 CMU faculty David Balzer, a key figure in launching the radio-style show, has more than a decade of experience working in broadcast radio in Winnipeg. (Screenshot by Nicolien Klassen-Wiebe) 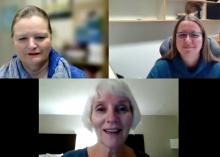