Bursary connects students to their faith 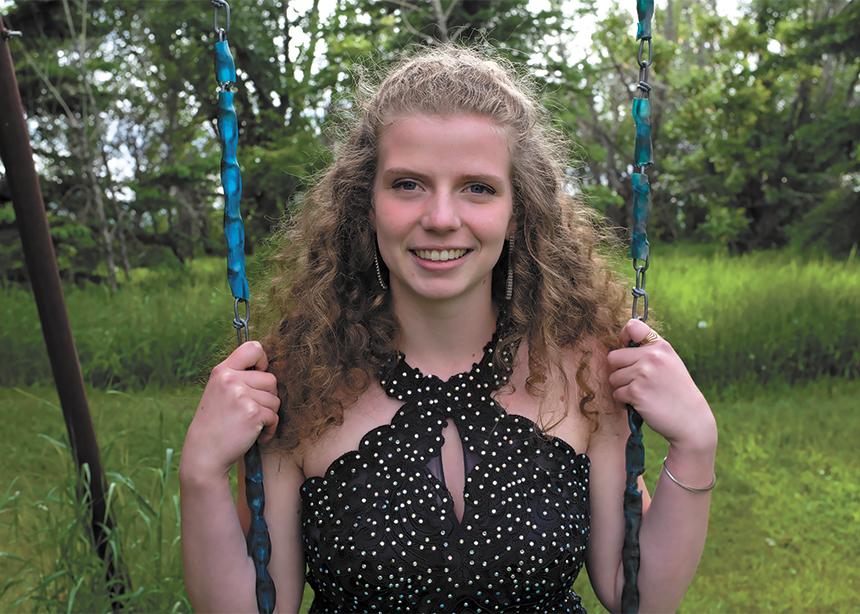 Danika Warkentin, one of this year’s recipients of the Mennonite Church Alberta student bursary, is a first-year student at Canadian Mennonite University. (Photo credit: Jeannie Willms)

“Ever since I was a little girl, I knew I wanted to attend a Mennonite post-secondary institution,” says Danika Warkentin, one of seven recipients of this year’s Mennonite Church Alberta student bursary.

As Mennonite families pray and consider how they can pass on their faith to the next generation, going to Mennonite schools is one way to encourage further faith exploration. That is why MC Alberta has been offering student bursaries since 1999 as “an incentive for young people to nurture their faith as they pursue higher education.” According to the MC Alberta website, “We believe that when our young adults grow spiritually, the greater community grows as well.”

In order to receive the bursary, applicants must belong to an MC Alberta congregation and have successfully enrolled in a Mennonite or Anabaptist post-secondary institution.

Warkentin has just begun her first year at Canadian Mennonite University (CMU), following in the footsteps of her parents, who both attended the school over 20 years ago. She shares how her spiritual development has been shaped by living in Burkina Faso as a child, being one of the few young people at Springridge Mennonite Church in Pincher Creek, Alta., and most of all, by the faithful witness of her mom.

Warkentin loves her church. “Everyone is there voluntarily, not because they have to be, like in school, so community is different—people want to know you.” She appreciates that “there is a specific time to worship God, that we can put things aside and work on deepening our relationships with God together.”

Her advice to churches who want to keep young people in the community is to “make youth feel from a really young age that they’re part of the church—don’t be afraid to give youth responsibilities.” Warkentin has been playing piano at Springridge since she was 12 years old and later took on the role of Sunday school teacher for the younger children.

Now she is part of a new community at CMU. “Now that I’m here it’s easy to make connections—like with Cassidy [Brown] whom I already knew from Camp Valaqua.”

Brown is from Bergthal Mennonite Church in Didsbury, Alta., and also received a MC Alberta bursary this year. She says, “My decision to attend an Anabaptist post-secondary school began as a curiosity about my faith and a yearning for intentional community and has blossomed into a yearning to integrate my faith with my education.” She especially enjoys learning about the integration of Anabaptism and science.

Anne Retzlaff, from Foothills Mennonite Church in Calgary, Alta., is entering her second year at Columbia Bible College (CBC). Another bursary recipient, she talks about how she was impacted by a course last year entitled Introduction to Christian Theology. “It generated more questions than I had before and instilled in me a yearning to learn more about the doctrine and practices of Mennonite faith.”

She also says, “I look upon a second year at this school to help cultivate those views further and become more fully aware of the different ways in which I can lead a Christian life outside the walls and boundaries of CBC or the walls and community of a church.”

Interestingly, the bursary Retzlaff and others received came after the sale of the Swift Current Bible Institute (SCBI), which had the goal of encouraging young people to explore mission and Mennonite theology. The institute was begun in 1936, and youth were encouraged to attend classes there for five-and-a-half months as a way of being rooted and discipled in their faith.

SCBI closed its doors in 1996 and the property was sold in 1997. At its meeting in 1998, the Conference of Mennonites of Alberta decided to use a portion of the proceeds to pay off part of the land purchase of Camp Valaqua and to set up a tuition assistance program for young people wishing to study at Mennonite institutions.

Since then at least 150 young people have benefited from the MC Alberta student bursary.

After completing a year at CMU, Bryant Neufeldt from Foothills Mennonite Church says the main reason he chose to go back to CMU is the people. “The students that are now my friends have made CMU feel like home, and they have challenged and uplifted my faith in God.” 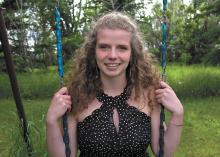 Danika Warkentin, one of this year’s recipients of the Mennonite Church Alberta student bursary, is a first-year student at Canadian Mennonite University. (Photo credit: Jeannie Willms)