Building shalom in the Philippines 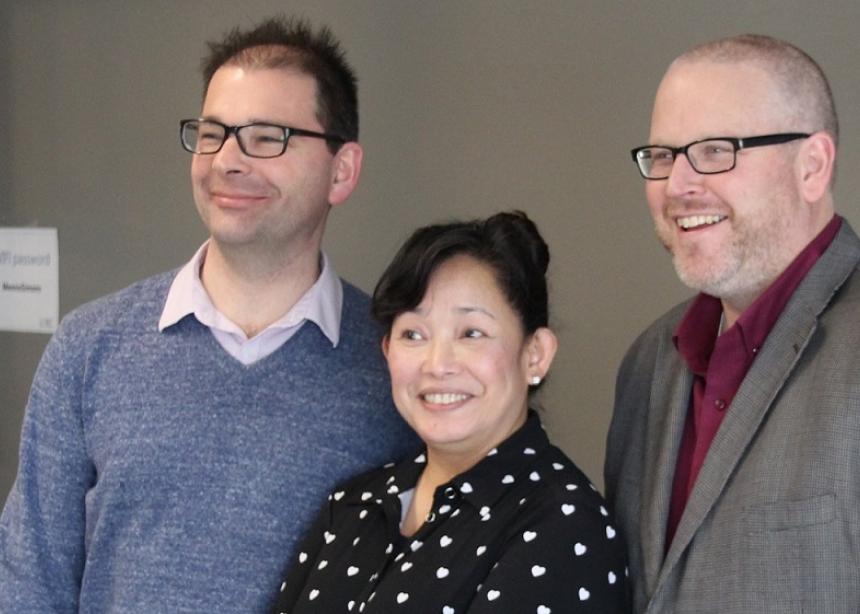 Joji Pantoja and her husband Dann serve in the Philippines as Mennonite Church Canada Witness workers. Following the September 11, 2001, attack in New York City, Dann in particular felt called as a Christian to work at building peace with Muslims.

Speaking at the Mennonite Church Eastern Canada offices on April 4, 2018, Joji explained that they assumed they would be going to Pakistan or “one of the other ‘stans’” but then remembered the Muslims in their own homeland of the Philippines. At the time, they were at home in Vancouver with their family, including grandchildren. Dann was studying theology and focussing on shalom (peace). Together they wanted to find a church with a peace theology. Soon they found themselves at Peace Mennonite Church in Richmond, B.C., now one of their supporting congregations, together with Toronto United, Leamington United, Waterloo North, and East Zorra Mennonite Churches.

In 2006, the Pantojas went to Davao, a city on the southern island of Mindanao, to train others in peace building. Their goal is to have worshipping communities that build and promote peace in all 81 Philippine provinces by 2025. They already exist in 33.

When the Pantojas come to a community, they begin by listening and meeting with various groups, including the rebels and military, spending up to two years on this part of the process. In time, they teach shalom, which they stylize as harmony with the Creator, with self/being, with others, and with the creation itself. They build on Jesus’ great laws—love of God, and of others as the self—not hiding their Christian perspective, whether the people they are working with are Christian, animist, Muslim or atheistic. This openness is welcomed, especially by Muslims.

In Vancouver Joji had been a successful financial planner. When Dann started talking of going overseas, she wondered why; she could have spent the rest of her life comfortably running other people’s fortunes. But God challenged her, asking if she wanted to spend her life making others rich.

After two years of watching Dann work in the Philippines, Joji informed him that unless economic support was developed for the marginalized people with whom they worked, there would be no peace. She began researching ideas on how the people could become self-sufficient and came on the idea of coffee growing.

The work with peace building goes hand in hand with coffee growing, and 25 percent of the gross income of Coffee for Peace goes to develop new communities. Coffee growing helps to keep mountainsides from eroding in the increasingly violent storms like Typhoon Haiyan in 2013. Currently they are building two more coffee processing areas, and they have over 600 farmers involved. Coffee for Peace and Peacebuilders Community have both won numerous international and national awards, with President Rodrigo Duterte personally giving Joji one of the Inspiring Filipina Entrepreneurs awards in 2017.

When asked about Duterte, who is generally painted as a violent populist who has personally carried out extrajudicial killings of drug dealers, Joji rolled her eyes. Shrugging her shoulders she commented, “He is not perfect, he loves the poor, hates corruption, and loves the indigenous peoples.” She pointed out that, “He is not rich, he came from an unknown school, so good luck on getting things done.”

The Pantojas are working to make their work sustainable. The current three-year support from partnering congregations in Canada helps, and they are maximizing this time in their work.

“The work is scalable and transferrable,” she says. Kind of a mix of MCC, MEDA and Witness work. 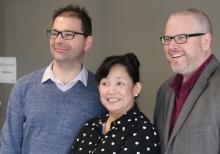 Joji Pantoja speaks about her and her husband Dann’s work in the Philippines, building worshipping peace communities and developing Coffee for Peace, to create income for marginalized people. (Photo by Dave Rogalsky)