Building houses and learning to serve 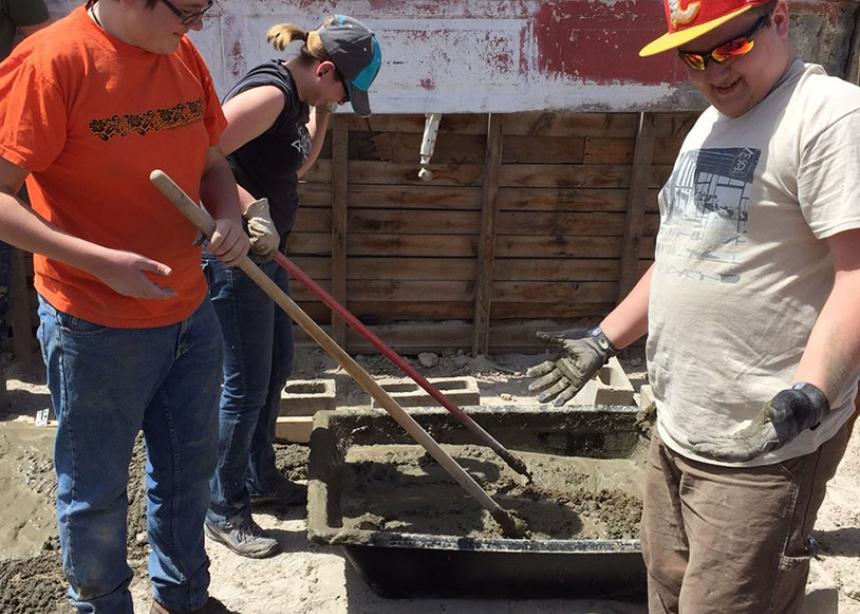 <p>Participants in the Youth Farm Bible Camp&rsquo;s recent trip to Mexico mix cement for the foundation of the house they built. Pictured from left to right: Brandon Wurtz, Holly Epp,&nbsp; and Dawson Dueck.&nbsp;(Photo by Mark Wurtz)</p>

It may not be typical summer camp staff training, but Mark Wurtz says the Youth Farm Bible Camp’s annual trip to Mexico is “probably more worthwhile than orientation.” The camp has been taking senior staff members and youth on short-term mission trips for the past eight years, and Wurtz sees the trips as highly valuable in developing camp staff.

This year, five senior staff and seven youth participated in the 10-day trek to Tijuana, where they partnered with Amor Ministries to build a house for a family in need. In exchange, participating youth are expected to work as counsellors-in-training for at least one week of summer camp and are strongly encouraged to work a week of adult special needs camp as well.

It’s all about learning to serve and to sacrifice, says Wurtz. The trip to Tijuana takes the group through Las Vegas and San Diego, where they witness opulence and luxury. The relative poverty of Tijuana comes as a stark contrast then, and participants realize that “we have so much here, we can give up some of that,” says Wurtz.

The homes they build are small by Canadian standards, measuring just 3.4 by 6.7 metres on a lot measuring 7.6 by 12.1 metres. The family they built for this year lost their previous home to fire. Each of the new homeowners is deeply appreciative. Wurtz says that on several occasions in recent years, including this year, homeowners have said to him, “This is our home, but it is also your home whenever you return to Mexico.”

For many participants, the Easter worship service they attended was significant. Wurtz says the youth were amazed to find they had “come all the way to Mexico and here are people worshipping the same God that we believe in.”

He hopes participants learned a few other lessons, too, including, “Don’t take what we have for granted,” and, “You can become a servant in Canada, too.”

To read a blog and view a video of this year’s trip to Mexico, visit http://yfbc.com/mexico and follow the links. 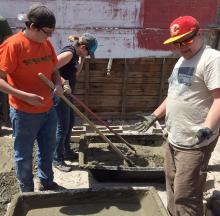 Participants in the Youth Farm Bible Camp’s recent trip to Mexico mix cement for the foundation of the house they built. Pictured from left to right: Brandon Wurtz, Holly Epp,  and Dawson Dueck. (Photo by Mark Wurtz) 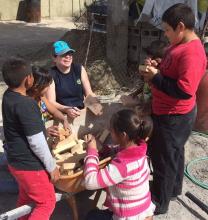 Holly Epp, volunteer coordinator for Youth Farm Bible Camp, in the blue ball cap, enjoys communicating through pictures with the neighbourhood children in Tijuana, Mexico, where a group from the camp built a house. (Photo by Mark Wurtz)