Building friendships and breaking down walls

One volunteer's experience as a restorative justice volunteer 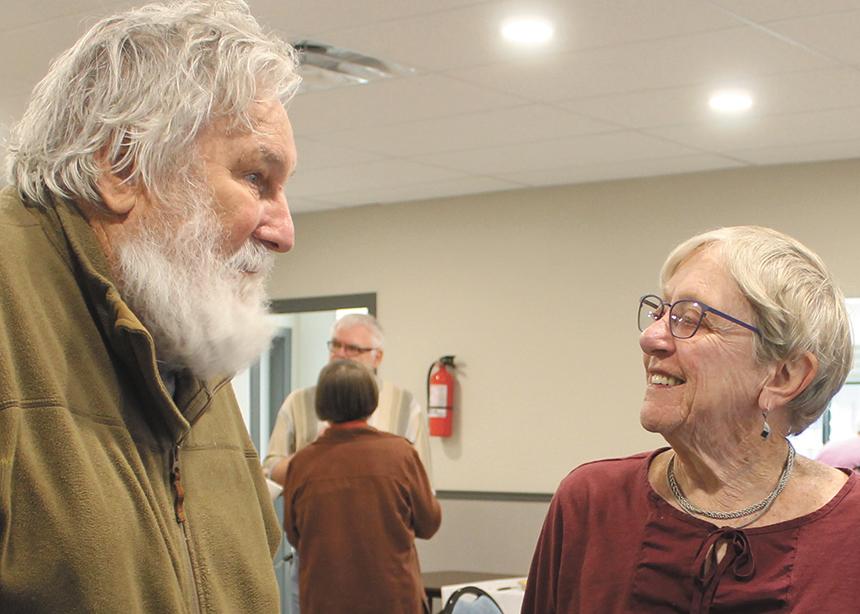 It has been 30 years since Ed Olfert first set foot in the federal penitentiary in Prince Albert, Sask., but he wasn’t there to serve time!

Speaking at a Parkland Restorative Justice information meeting held in Rosthern, Sask., on Sept. 15, Olfert told the audience how, in 1988, he sat on the Conference of Mennonites of Saskatchewan (the former name for Mennonite Church Saskatchewan) committee that was responsible for Person to Person (P2P), a prison visitation program. Dale Schiele, the program’s director at the time, challenged committee members to make a one-time visit to the penitentiary. Olfert accepted the challenge, and he and his wife Holly made the four-hour drive to Prince Albert to visit Bob, an inmate serving a 10-year sentence.

“We connected well with Bob and inquired of Dale about continuing our visits,” said Olfert. Some time later, the Olferts experienced a family crisis. “We received a card from Bob that was very warm,” he said. “He was thinking of us. This reinforced for me that this was a two-way relationship.”

Olfert, who is now pastor of Grace Mennonite Church in Prince Albert, is inspired by Jesus’ words in Matthew 25:36: “I was in prison and you came to visit me.” He said, “Every person in the institution, I see they have that of Christ within them.”

In 1997, Olfert also began volunteering with Circles of Support and Accountability (CoSA). The program helps sexual offenders reintegrate into society after serving their sentences. By providing them with support and keeping them accountable for their behaviour, CoSA strives to ensure that ex-offenders are not isolated.

“Volunteers form a circle around [sexual offenders],” explained Heather Driedger, Parkland’s director. These circles “support them in their strengths and uphold their dignity,” she said, adding that the program’s goals are that there be no more victims and that former offenders know they are not disposable.

Olfert was part of a circle supporting Raymond. He said that while Raymond didn’t appreciate being told he was spending his money unwisely, he did appreciate the care and support of his friends in the circle. Once deemed unemployable, Raymond now operates a forklift and manages a team of forklift operators in a warehouse owned by a large grocery chain. “It’s about befriending,” said Olfert, “reminding these people that they are normal and loved of God, and as valuable as you or I.”

Andy (a pseudonym) is a former sexual offender who has received care and support through CoSA. Olfert was part of his circle. Andy had served about three-and-a-half years of a five-year sentence for viewing and downloading child pornography when he heard about CoSA. The program offered him hope. A sexual offender is at the bottom of the prison hierarchy, Andy said. “Think of the loneliest place in the world and double that. People don’t want to be seen associating with you.”

Andy observed that inmates with addictions received a lot of support, while sexual offenders received none, unless they were part of a CoSA circle. “A lot of these guys have nothing. They need help,” he said. “If you can be their friend, it can keep them from going back.” And he thinks CoSA could do even more. “I would like to see CoSA be able to go behind the wall, to have programs before release.”

Today, Andy is rebuilding his life. It took him a year-and-a-half to find employment, but he has been working for the past year. He and his wife have hosted the Olferts at their cabin at a Saskatchewan lake.

Parkland Restorative Justice continues to offer friendship and support to those who have found themselves on the wrong side of the law. About 60 inmates receive monthly visits from volunteers through P2P. They represent about one-fifth of the prison’s population.

Parkland also currently has three CoSA circles. The Micah Mission in Saskatoon and CoSA South Saskatchewan in Regina each have 15 to 20 circles.

Driedger said that Parkland is always looking for more volunteers, as it has a list of inmates waiting for visits. She estimates that upwards of 70 percent of Parkland’s volunteers are from MC Saskatchewan churches, with the remainder coming from the Roman Catholic or United churches, or from no church.

Olfert spoke highly of volunteer experience. “It has been life-changing for me,” he said. “It has reminded me of the goodness in every person.” One of his granddaughters refers to the men her grandfather has visited as “Opa’s jail friends.” The Olferts have seven grandchildren. He said, “I’m doing what I can to make their world a little gentler, a little bit safer, a little bit more holy.” 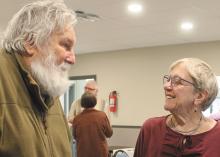