‘Bring what you have’ 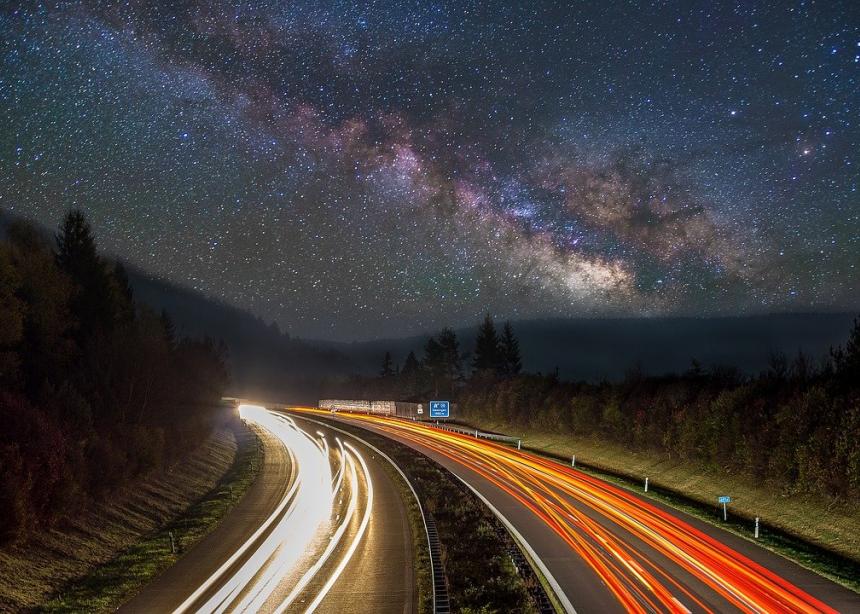 I was driving the night shift that week, hauling wood chips to the pulp mill in The Pas, Man.

I pulled into the Esso C-Store in Nipawin, Sask., a little after 11 p.m., closing time. As I filled my mug, I apologized for keeping the clerk around so late.

“Oh, no,” he assured me. “The fair closes tonight, so we’re staying open till midnight to catch the traffic going home.”

Great, I thought. Heavy traffic. Sixty-thousand-plus kilograms neither accelerates nor decelerates with enthusiasm. Heavy traffic means burning up energy on concentration, energy that could otherwise be conserved and doled out as needed throughout the night.

East of Nipawin, No. 55 soon straightens and becomes tabletop flat. Ahead
I could see a long line of double-red pinpricks of tail-lights. Traffic began to sort itself out, slower vehicles being passed, smoothly, orderly. There was no oncoming traffic.

Except there was. Some distance ahead, headlights came towards me. Then suddenly they disappeared, and I was briefly aware of a smear of light towards the right ditch, both headlights and tail-lights. “This can’t be good.” There was obviously a collision.

As I ground to a stop, questions started appearing in my brain: “Do I take my phone? My flashlight?” “Do I run back, walk back?” “How could I be useful?” I needed time to figure out who I would be. I walked. I smelled hot brakes as I passed my trailers.

It was a minivan. Five kids, two adult women and a man that I could make out in the darkness. The women and children were struggling with the shock of the impact, screaming, crying, hugging each other. I could see no blood. I stepped over to the man, still leaning on the van in the ditch, noting that he held a toddler.

“Were you driving?” I asked.

He nodded, said something more softly, but I couldn’t make it out.

I checked to see if anyone remained in the vehicle, then turned back to the driver. “Are you okay?”

He pointed down and said something about his foot. That same soft voice said, “Can you take her?” I did. He slumped down into the open side door, struggling to remove his shoe. I could see the beginning of ugly swelling.

We were quickly joined by other homeward-bound fair-goers. Several spoke energetically into phones. Some seemed acquainted with this family and spoke to them by name. I still held the toddler.

Then a young girl from this family approached, I’m guessing she was 8 or 9. She held out her arms. As I passed the little one over, I asked, “Can you manage?”

It didn’t matter. As the chunky little one began to slide through her arms, she turned and thrust her towards one of the women. Seems this big stranger had held onto her little sister long enough.

I recall feeling awe for her feisty determination. At that point, another little girl stepped up and told me that she had bumped her head, and it hurt. I knelt, we talked quietly.

The roadway was now crowded with support. I assumed the same was the case at the other vehicle, some distance down the ditch. It was time for me to go. I walked into the blackness to my rig.

I have extended family members who have volunteered as first responders for years. I’m not that guy. Making important care-giving decisions in crisis situations is not my gift.

That night, on the highway near Carrot River, I was reminded that God equips us all, and all differently. It becomes the vibrancy that makes life good.

Bring what you have. It’ll be enough. Trust others to fill the gaps.

Good job, Ed. God used you the way he needed that night.