Breathing new life into the music 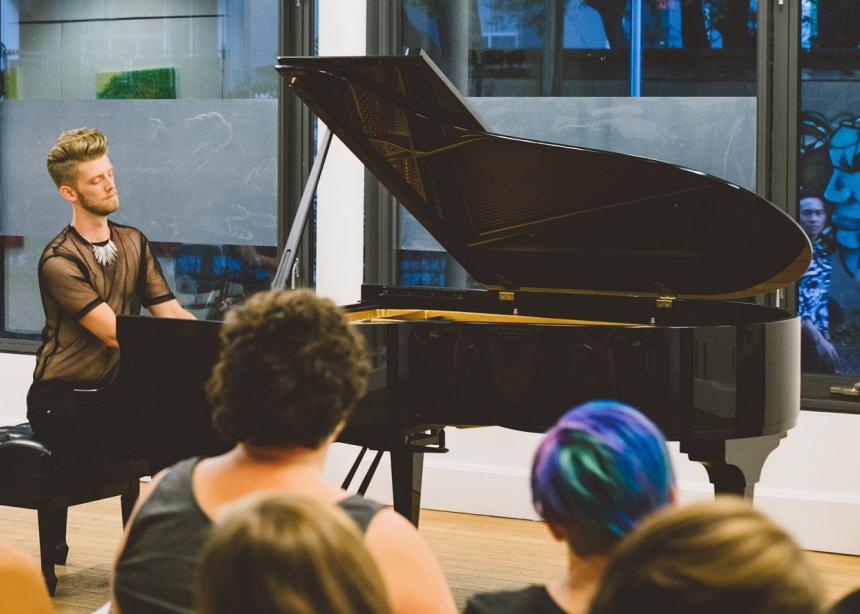 When a Toronto-based LGBTQ orchestra approached queer classical pianist Darren Creech about performing Victor Davies’ “Mennonite Piano Concerto” with it in concert, it didn’t realize what a perfect fit he would be.

Unbeknownst to the Counterpoint Community Orchestra at the time, Creech is Mennonite and he grew up listening to the piece.

“I’ve owned the score for 10 years now, but I’ve never had the opportunity to play it with an orchestra,” Creech says. “Not only did I know the piece so well, but it was my great-aunt, Irmgard Baerg, who premiered it with the Winnipeg Symphony Orchestra in 1975.”

Creech, 26, will give the concerto its Toronto premiere when he performs it with Counterpoint as part of the orchestra’s upcoming concert, “Love & Light: Celebrating Canada 150 with Pride.” The concert takes place June 10, 2017, at Saint Luke’s United Church at 7:30 p.m.

The “Mennonite Piano Concerto” is a 30-minute piece that consists of three movements. Davies based the concerto’s musical themes on hymns popular in the Mennonite community.

Creech, who grew up the son of missionaries in Senegal, West Africa, says the concert feels special because it will combine his identity as a Mennonite with his identity as a queer man. “It brings together these two important identities that both influence my life a lot in a way that I don’t think has happened before for me,” he says.

He adds that it is important to him to breathe new life into the work with an inclusive, cross-cultural lens. The concerto will be performed alongside the premiere of “Elegy for Orlando,” a piece composed by orchestra member and cellist Andrew McClure to commemorate the one-year anniversary of the Orlando nightclub shooting.

“It’s cool to be able to present [the concerto] in perhaps a different context and to a somewhat different audience than maybe it’s typically presented to,” Creech says. “Given that it’s a queer orchestra, during Pride month and the one-year anniversary of the shooting in Orlando, it feels important to bring these stories of resilience from the Mennonite community and the strength that can be drawn from faith practices.”

“Growing up in Senegal and being Canadian, but also being queer and Mennonite, I think it brings a lot of identities and angles together in a special way,” he adds.

Although it is just now making its Toronto premiere, the “Mennonite Piano Concerto” has been performed by orchestras across Canada and in parts of the U.S., as well as in Bulgaria and China. At one point, Baerg’s recording of the piece—recorded with the London Symphony Orchestra at the legendary Abbey Road Studios in London, England—was one of the most requested works on CBC Radio 2.

“What started out as a very modest piece [has] gone on to have quite an amazing life,” says Davies, who will be in the audience on June 10 and has spoken with Creech a handful of times about the concerto. “He’s a terrific young guy . . . and he’s a wonderful pianist. We’re very delighted that he’s playing it.”

John Edward Liddle, Counterpoint’s guest conductor for the performance, is also delighted. He says that when Creech and the orchestra first rehearsed together, the pianist blew everyone away. “He is truly a world-class soloist,” Liddle says.

Liddle fell in love with the “Mennonite Piano Concerto” after hearing it on CBC, and suggested it to the orchestra. “I’ve listened to a lot of [contemporary] Canadian [compositions], and there’s nothing that’s as poignant, fun and joyous,” he says. “The piece takes you on one of these great journeys. . . . It’s so vast and endless in terms of what it offers the listener.”

In August, Creech will give a concert and workshop at Conrad Grebel University College’s Ontario Mennonite Music Camp, where he previously worked as the piano instructor. That same month, he will perform the “Mennonite Piano Concerto” in a two-piano format in Abbotsford, B.C. Creech is glad that he can bring the concerto to new audiences. “It’s a very fun piece to play and to listen to,” he says. “It ends with a lot of joy. It’s a very rousing piece.”

For more information about the pianist, visit darrencreech.com. 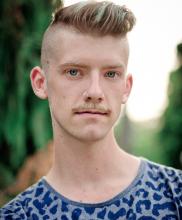 The Counterpoint Community Orchestra is an inclusive LGBTQ orchestra founded in 1984. (Tom@TomLegrady.com photo)

To Aaron Epp:
Wanted to thank you for your very well written article about Darren and the Toronto premiere of the Mennonite Concerto.
Best wishes
Victor Davies

I have Canadian radio personality, Jurgen Gothe of Disc Drive, to thank for introducing me to the Mennonite Piano Concerto. Jurgen introduced to a wide variety of classical music written in the last 150 years.