Breaking through the screen 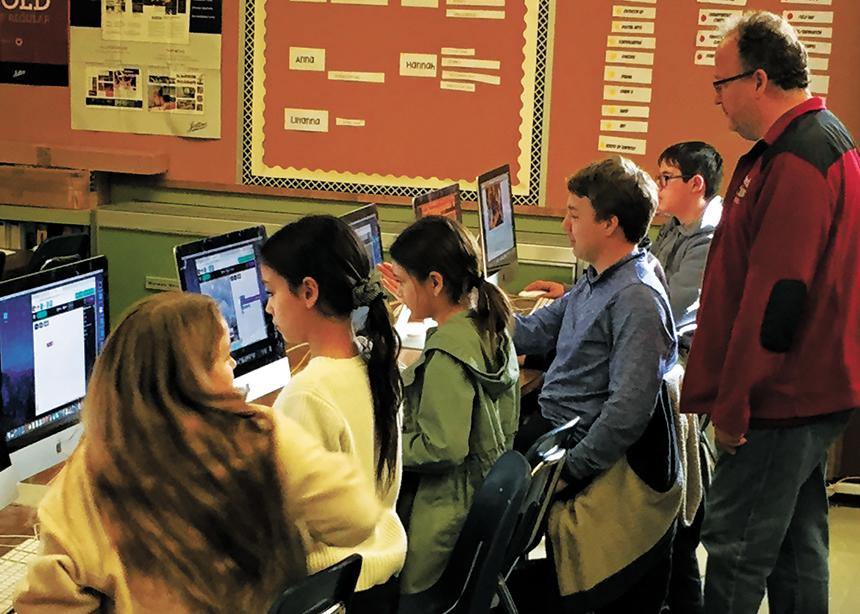 WMEMS Bedson students in grades 6 to 8 participate in a coding club, where they learn to write code for building websites. (Photo by David Stoesz)

They are what many people look at to check the time, talk to their friends, prepare for meetings and unwind at the end of the day. But it’s not just those who can buy devices for themselves who are using them. Children are now figuring out how to work phones and tablets before they can even walk or talk.

Growing up is a whole new game for children today, and it’s what is behind those screens that parents need to know about. Several Mennonite institutions in Winnipeg have made it their mission to do just this.

The Bedson campus of Winnipeg Menno­nite Elementary and Middle Schools (WMEMS) hosted an event entitled “Raising children in the digital world” on Feb. 21. School psychologist Sarah Juchnowski and Constable Orlando Buduhan, a Winnipeg Police community relations officer, talked about the impact of screen time on children’s mental health and safety. Around 90 parents gathered to learn about the risks of technology and what they can do to keep their children safe.

David Stoesz, principal of WMEMS Bedson, said he hears of children whose parents don’t let them go to the park or ride their bikes with their friends because they’re afraid of what could happen. “We have fears of the dangers our kids can get into outside and we don’t fear enough the things that are right in front of us,” he said. “The kind of dangers in the backyard are minimal compared to the dangers kids face inside with these devices.”

He said the school wanted to host the event to engage parents with relevant issues that are affecting their children’s lives.

Students at WMEMS Bedson already start using computers in Kindergarten. The older grades have digital arts classes as part of an enrichment program, and students learn how to design, code and use different devices and programs. Starting in Grade 6, students can bring their own tablets or smartphones to school and are encouraged to use them for certain activities.

And there’s a reason for this. Digital media and technology allow students to learn in new ways, collaborate on projects, express themselves and their creativity, and connect with their friends.

But digital media must be used responsibly. The school has a policy that the use of personal devices is only allowed under the direction of a teacher and is off-limits during lunchtime and recess. “We want kids to spend their lunch face-to-face,” Stoesz said.

And with good reason. Despite the many contributions technology makes, it also has negative effects on safety and mental health, according to Dr. Jean Twenge, whose 2018 study of eighth, 10th and 12th graders in the United States found that less screen time correlated with higher happiness levels. The more hours of screen time per week, the lower the individual’s happiness and psychological well-being.

Digital devices often shorten young people’s time spent sleeping, exercising and going outside. They can expose them to strangers and suspicious content, but they can also increase anxiety and mental-health issues.

This is where Recovery of Hope (RoH) speaks into the issue. RoH, a program of the Mennonite mental health and wellness organization Eden Health Care Services, provides counselling and education for individuals and families in Manitoba.

It organized an event on April 11, also entitled “Raising children in the digital world,” held at École Charleswood School in Winnipeg. More than 300 people gathered to listen to a presentation on the topic by Dr. Gordon Neufeld, a developmental psychologist and best-selling author based in Vancouver.

“Those [attendees] that spoke to me and my colleagues were very appreciative and grateful for the message, and quite inspired,” said Terry Warburton, the clinical director of RoH who helped organize the event.

She said that one of Eden’s goals as an organization is to provide resources to the community, including supporting parents in their relationships with their children. “Parents are concerned about their child’s use of their devices and the things they’re accessing online, and not sure what they should do [while] feeling a little bit helpless,” she said.

Neufeld approaches everything in the context of what matters most: relationships. He teaches parents that the main reason children crave a digital connection is to bridge separation, so parents need to nurture a meaningful connection with their children now more than ever.

“Dr. Neufeld’s message reminds us why this is happening, helps us make sense of what’s going on in the child, and then finds ways to move into nurturing the relationship,” Warburton said. “It’s a very hopeful message, because it’s always about relationships, and that it’s never too late to start.” 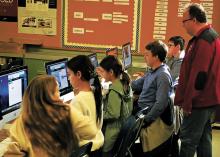 WMEMS Bedson students in grades 6 to 8 participate in a coding club, where they learn to write code for building websites. (Photo by David Stoesz)