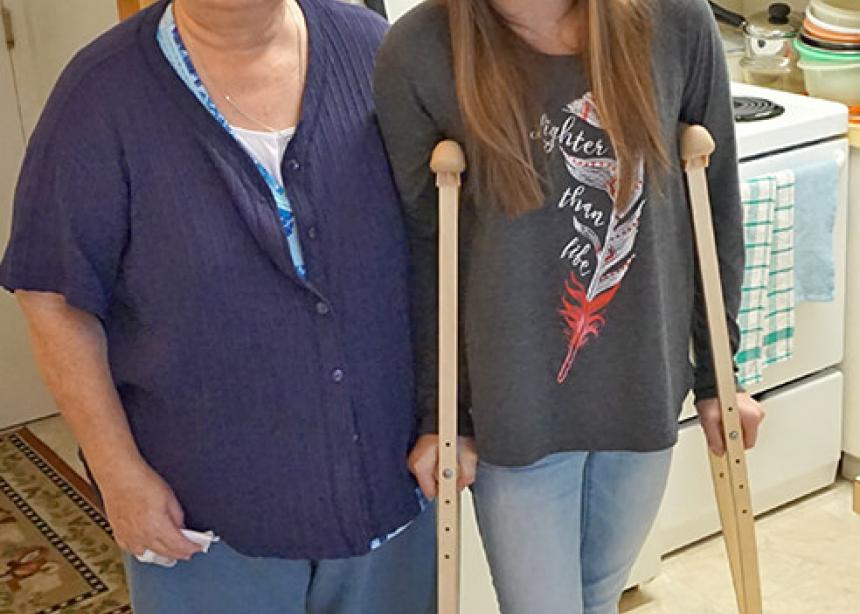 Across the parking lot from Altona Mennonite Church stands a long, yellow brick building with narrow halls and tiny bachelor suites that rent out for $285 per month. Friendship Manor is a government-run housing facility for people on social assistance.

It’s a snowy Sunday morning in early February, but the tiny kitchen in the Manor’s common room is a happening place. A half-dozen young people from Altona Mennonite have braved the storm and are making waffles, filling up the room with their youthful enthusiasm. It’s an unlikely breakfast club: six young adults from the church, five Manor residents and Margruite Krahn, a local artist and the former leader of the Altona Mennonite Church youth group.

After everyone has had enough to eat and coffee cups have been topped up, the tables are pushed together and everyone joins in an informal sharing circle. Krahn talks about her daughter, who’s just come through a difficult time. One of the residents, a man named John Penner with a salt-and-pepper beard that rests on his chest, says he’s troubled by his cousin’s recent death. A woman named Bev Winter with short grey hair announces her engagement to the man sitting at her elbow. Everyone applauds.

The friendship between a group of young people from Altona Mennonite and the residents of Friendship Manor goes back five years, says Krahn. It all started with Jean Vanier, the Catholic philosopher and humanitarian who founded L’Arche. Krahn was leading the church youth group and they read and discussed Vanier’s book Becoming Human, a reflection on the need for community and the gifts that everyone has to offer, even the most vulnerable.

“We were like, these guys are at the end of our parking lot. Why aren’t we doing what Christ calls us to do?” says Krahn.

So the youth group decided to start getting together with the residents of Friendship Manor for breakfast.

But the housing complex wasn’t well maintained. Fire extinguishers were broken. Maintenance requests had gone unanswered. Broken baseboard heaters had singed the curtains in the common room and the whole place reeked of smoke.

“The drapes had been hanging over the heaters for so many years that they were burnt,” says Winter. “Manitoba Housing didn’t care. So when we met Margruite and she offered to be our advocate, we just ripped them off.”

The youth group sat down with residents, made lists of their concerns and came up with some projects to do together. They painted the common room, raised money for new chairs, arranged for carpets to be shampooed, reported fire hazards to the local fire inspector and brought the tenants’ concerns to Manitoba Housing.

Since then, Manitoba Housing has made major improvements to the Manor, renovating some of the suites, installing a kitchen, and providing new tables and chairs for the common room. A tenant-led advocacy committee is being organized. Krahn doesn’t credit her youth group with all of the changes, but she’s pretty sure they had something to do with it.

“Things are good now,” says John Penner. He’s a man of few words, but from his demeanour it’s clear he regards the visitors as old friends.

“Before this all happened, everyone stuck to themselves. We never got together in the common room. Now we do it all the time,” says Winter.

As she’s speaking, David Wiebe, another tenant, walks up to her with a flat of eggs. He heard she needed some for a baking project.

Krahn is no longer the youth leader at Altona Mennonite, and many members of the original youth group are now university students in Winnipeg. But the friendships remain.

Paige Mierau Friesen is in her second year of university, studying English and sociology at the University of Winnipeg. Last year she wrote an article about her friendship with Winter for Canadian Mennonite.

Friesen says the residents at Friendship Manor have showed her a lot of love over the years, adding, “I feel like we get a lot of love from them. They meet us halfway each time.”

She and Winter chat on Facebook and Friesen hopes they’ll stay connected even after Winter gets married this spring and moves out of Friendship Manor. “I know it’ll be hard because of our two very different lifestyles, but then again, I guess that’s kind of the point, right? To realize we can still be friends despite the different demographics and everything.”