Bread in many forms 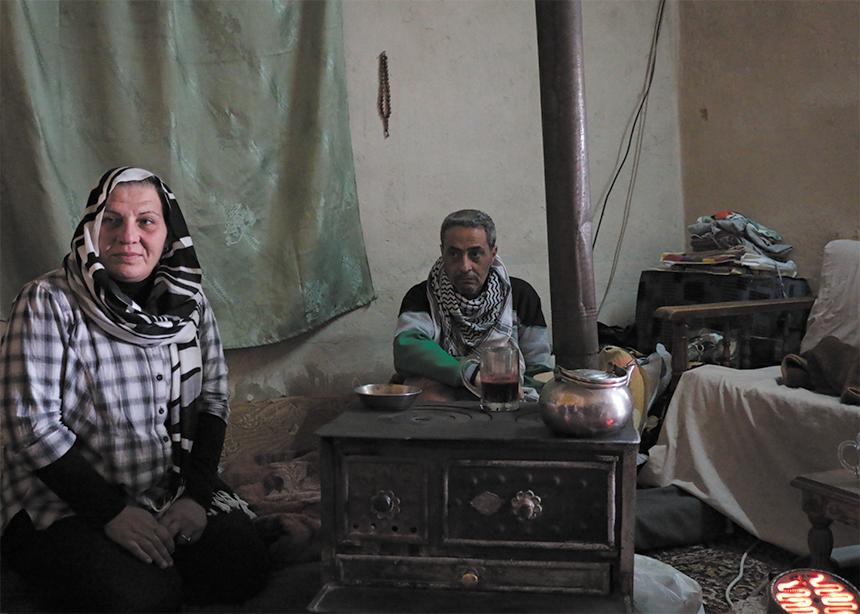 Sami and Amina (real names withheld for security purposes) were displaced from their home in Aleppo, Syria. This photo was taken in February 2018 in the home where the family of seven lives in Breike, in the Qalamoun valley. They receive monthly food packages from MCC through local partners. (MCC photo by Emily Loewen)

A century ago, bread was the beginning of the work of Mennonite Central Committee (MCC). Relief kitchens in Ukraine (then southern Russia) fed families who had been displaced and were starving. Neighbours from around the world provided loaves of wholesome dark bread.

Now a century later, MCC still works to meet the needs of people who are hungry and sometimes cannot afford even one meal a day. Whereas, 100 years ago you would find bread, today you might see rice, beans, cooking oil or even a paper voucher. While MCC’s mission is more important than ever, its work has adapted, with increased focus on different forms of relief for different contexts, more robust program monitoring and even gender analysis.

The war in Syria has now entered its ninth year, having displaced millions of people. There are more than 1.5 million Syrian refugees in Lebanon, where MCC and its local partners are providing vouchers that can be redeemed for food in shops. When people receive vouchers rather than food packages, they can choose what works best for them, providing dignity and a small sense of normalcy.

However, inside Syria MCC partners are providing packages of food that include items such as pasta, cooking oil and chickpeas. In the midst of conflict, sometimes food just isn’t available, or it isn’t safe to go out to shop. MCC partners are able to secure food locally in bulk, which helps strengthen the local economy and provide foods that people are used to eating. There isn’t one right way to offer relief. It is important to understand the context and choose the right method.

Over a century of work, MCC has also increased its focus on monitoring and evaluation. Program monitoring provides accountability to donors and, equally important, provides accountability to local communities. The evaluation process allows people to provide feedback on what takes place in their community. It is also an opportunity for people to see results and celebrate what was achieved together.

Of course, evaluation also helps MCC to learn and improve when a project doesn’t go as expected. In one agriculture project in Zimbabwe, smallholder farmers were struggling with a pest: the maize stalk borer. The project was set up to help farmers mix corn with a new kind of grass called desmodium to help repel the pests.

This worked well for those farmers, but MCC learned the pests had been forced into neighbouring fields, eating those crops instead. So the plan was adapted to include a special sticky grass, called napier grass, planted around the edge of the plots. When a stem borer moth lands on the grass, it can’t move and gets trapped.

Thanks to monitoring, the project now reduces pests using a system that is affordable, accessible and easy to replicate, while maintaining relationships between neighbours. This pest control practice is now being applied in other projects across sub-Saharan Africa.

Watch this video to learn more about how this “stinky, sticky” grass is making a difference in Tanzania.

Over the years, MCC has increasingly recognized the need to understand gender dynamics, and how women and men access and control resources. When considering the impact of gender dynamics before distributing resources, it can challenge systemic inequalities and build efficient and equitable solutions.

For example, during a relief project in the refugee camps of Shasha and Mubimbi in the Democratic Republic of the Congo, MCC did a gender analysis before deciding what food to include. Corn is an important resource, and women are usually responsible for preparing it as a thick porridge. But since the camps didn’t have grinding mills, MCC realized that if it provided whole corn, the women and girls would have to walk through a forest, 10 to 15 kilometres each way, to find a mill in a nearby community where the corn could be ground.

The journey could expose women and girls to warring parties and sexual exploitation. Or their food could be stolen along the way. The trip would also be physically tiring, and the increased pressure on the mill could lead to conflict between the host community and the refugees.

Hearing that feedback from the community during the gender analysis, MCC decided to provide ground corn meal for the first two months of the project, and then supply a grinding mill that would be co-owned and operated by the refugee and host community groups.

This reduced the burden and risk for women and girls, while also strengthening relationships between the host and refugee communities, because people in the surrounding area could also use the new mill. It also minimized the harm that could have come from the good intentions of relief work.

One hundred years have given MCC countless opportunities to learn and improve. In these uncertain times, the core work of MCC is more important than ever. And the MCC of today is constantly evaluating and learning to serve in the best way it can.

MCC is thankful for the support of faithful givers that allows it to continue to provide bread, in all its forms, in the name of Christ.

Vurayayi Pugeni is MCC’s area director for Southern Africa, together with his spouse, Thelma Sadzamari. This is the second in a series of three articles that will appear in Canadian Mennonite throughout 2020. Read the first part, "Compelled by Christ to serve," and then visit mcccanada.ca/centennial to learn more about MCC’s yearlong centennial celebration and how to get involved. 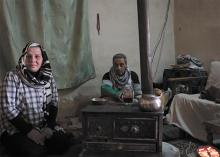 Sami and Amina (real names withheld for security purposes) were displaced from their home in Aleppo, Syria. This photo was taken in February 2018 in the home where the family of seven lives in Breike, in the Qalamoun valley. They receive monthly food packages from MCC through local partners. (MCC photo by Emily Loewen) 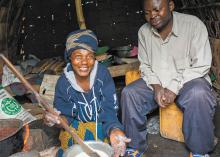 In the Mubimbi camp in the Democratic Republic of the Congo, Nsimire Mugoli and her husband, Chubaka Birhonoka, cook beans and porridge made with ingredients from their emergency food distribution in early February 2020. (MCC photo by Matthew Lester)