A blessing from God 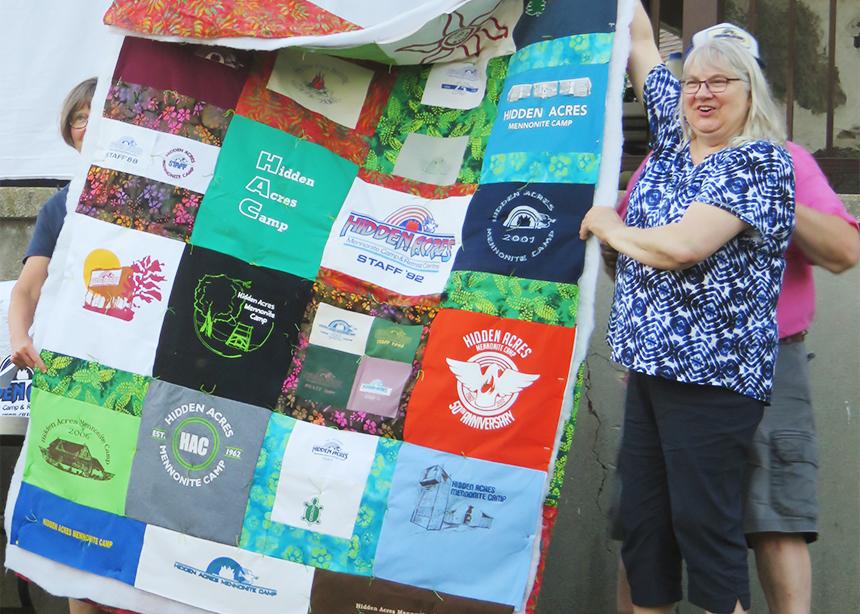 A gift to Chris and Campbell Nisbet to remember their years at Hidden Acres was a blanket made out of Campbell’s many camp T-shirts. (Photo by Roy Draper)

The idea that Hidden Acres Mennonite Camp is a sacred space where God is at work came up over and over again at the farewell event for Campbell and Chris Nisbet, held on July 13 at the camp near Shakespeare, Ont.

Surrounding all the stories and memories expressed, there was deep respect and appreciation for Campbell’s leadership as executive-director for the past 33 years, and for the way Chris enhanced the camp program through her music and worship skills and her caring attitude.

Roxanne Wright, a former camper and counsellor who first came to Hidden Acres as part of a Single Moms camp many years ago, paid tribute to Campbell’s ability to foster leadership in others. “Everything about me was forged here,” she said.

Sandy Poole, the board chair, also gave thanks for Campbell’s keen interest in people and his ability to pinpoint and cultivate everyone’s gifts and abilities. That theme was repeated by other former board members and camp supporters.

Recognition of his leadership also came in acknowledging the changes to Hidden Acres over the years. Ryan Erb, a long-time board consultant, pointed out that in the last 33 years the expanded facilities and year-round activities have moved the camp’s annual budget from $150,000 to $700,000. He assured Campbell, “Your legacy will live on.”

The four Nisbet children, who grew up at the camp, also pointed out how the place has changed, especially how the trees have grown. Although the children now live scattered across the country, with one of the daughters in England, they all returned for the farewell. One of the more touching moments of the evening was the song of blessing they sang as a family. Harmonizing beautifully, they sang the words of I Corinthians 13.

To thank the Nisbets for their years of service, the board and staff presented them with gifts that would remind them of their years at Hidden Acres. As well as a set of camp mugs, the couple were given a wall hanging signed by all the guests at the farewell. Another gift was a blanket made out of Campbell’s camp T-shirts, spanning 33 years.

A final keepsake to help the Nisbets remember Hidden Acres Camp was a handmade coffee table made from a walnut tree that once grew on the property. Campbell had planned to take the remaining piece of wood with him when he moved to Winnipeg, but while packing up his things it seemed to be missing. He appreciated that an experienced woodworker had already crafted it into a table.

Although there was sadness in the need to say goodbye, there was ongoing optimism that God’s work at the camp would continue. Before the final blessing, Chris Oldham, the new executive-director, was introduced. In recent years, he has been working in Saskatchewan but he grew up in Ontario, and he told the story of how, as a teenager, he dedicated his life to Christ while on a retreat at Hidden Acres. “God has called me back to this place,” he said.

Oldham is presently living in a rented house in Shakespeare with his wife and two young children as he gets acquainted with the camp. He worked with Campbell until the end of July.

Soon after the program began, it began to drizzle. As the light rain fell, some people moved under shelter and others raised their umbrellas, but most people stayed where they were, getting a bit wet but not soaked. The speaker continued, and soon the rain stopped. Campbell declared later that the rain was a good thing—it was a sign of blessing from God. 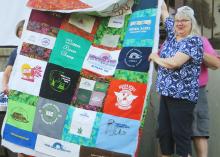 A gift to Chris and Campbell Nisbet to remember their years at Hidden Acres was a blanket made out of Campbell’s many camp T-shirts. (Photo by Roy Draper)

The Nisbet family sang the words of the ‘love chapter,’ I Corinthians 13, as a blessing at their farewell at Hidden Acres Mennonite Camp on July 13. Pictured from left to right: Campbell, Jessica, Rob, David, Rebecca and Chris. (Photo by Roy Draper)