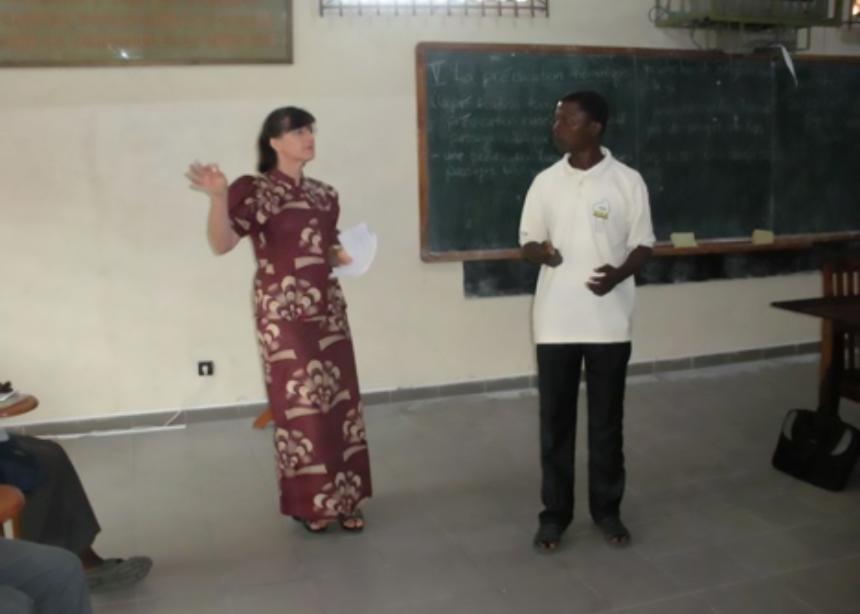 Nancy Frey remembers as a young child seeing a bird flying by and telling her mother, “Someday I am going to be like that bird and fly away.”

She did just that, spending a year in France after graduating from high school. That was only the beginning of a ministry career that has spanned two decades, most of it spent in West Africa.

After graduating from university, Frey taught high school French in Palmerston, Ont., but she still had a desire to travel and live overseas.

An opportunity arose in 1994, with the Mennonite Board of Missions, later the Mennonite Mission Network. For 15 months, she worked in Cotonou, Benin, as an intern in a systematic Bible training program that later became the Benin Bible Institute. It was her job to take class notes in French, documenting the curriculum so students could teach it back in their home communities.

Sensing a call to pastoral ministry, Frey enrolled at Anabaptist Mennonite Biblical Seminary (AMBS), graduating in 1998. She met Bruce Yoder at seminary and discovered that they shared an interest in overseas work. They married in July 1998.

In 1999, Yoder graduated from AMBS, their first child, Jeremiah, was born, and they responded to an invitation from the mission board to return to Benin. After six months of language training for Yoder in France, they began their work in Benin in February 2000.

Frey worked with administrators and taught at the Bible Institute. Yoder did some teaching and also travelled a great deal, serving as a resource to other partners in West Africa.

They were moved by the desire and commitment of their students to learn the Bible. In a room with poor lighting and only one fan, students would sit for up to 10 hours because, Frey says, “They wanted to study the Bible so badly . . . they were so hungry for Bible teaching.”

The church in West Africa is “filled with young people,” says Frey. Because it is relatively new, it attracts many young people who seek something different than the traditions of previous generations.

Frey and Yoder’s second child, Deborah, was born in 2001. They continued their work with the Bible Institute until 2009, when they felt there was enough local support and leadership for the school.

It was time for Frey to respond to the lingering call to pastoral ministry. Their family moved back to North America, where Frey was ordained and pastored the Mennonite Congregation of Boston, Yoder began doctoral studies, and their children became acquainted with life in North America.

But their passion for the church in West Africa persisted. In 2012, they responded to an invitation from the Evangelical Mennonite Church of Ouagadougou, in Burkina Faso. Frey worked in the church’s Christian university residence, helping students adjust to life in a big city and develop their Christian faith and leadership potential. She also taught for several years at the International School of Ouagadougou, where their children attended. Yoder completed his PhD thesis, stayed involved with the Bible Institute, and continued to teach and help the church in West Africa. Both of them served on the leadership team at the Ouagadougou church.

In August of this year, two decades after they began their ministry in West Africa, they returned to North America, where their children were enrolled in post-secondary studies.

Reflecting on the gifts of their time in West Africa, Frey says, “I know my Bible really well after living in West Africa.” She names it as the primary, foundational document for life in the global church. Various issues can be divisive, but studying the Bible unites Christians, teaching them about the historical church, inspiring the current church and will guide the future church. Without it, churches are “anchorless and rootless,” she says.

She also gained a profound sense of gratitude and trust in God. She says she learned “the secret to a joy-filled life . . . from people that don’t have the opportunities and privileges we have.” Reflecting on her life experiences, she says, “I trust God with my life and the lives of my family. Nothing can shake my trust in God.” If something bad happens, “God will hold and carry me through.”

She has learned to let go of the need to control. Last year, when she and Yoder had no idea what the next step in their lives would be, she drew on an image of God as a bouncy castle. “Whatever happened, we would land on our feet,” she says. “I didn’t know, but God knew.”

Frey again responded to a call to pastoral ministry, this time at Listowel (Ont.) Mennonite Church, not far from where she grew up and began her teaching career.

Reflecting on how she has made her home in so many different places over the years, she says, “My parents gave me roots. That allowed me to have wings.” 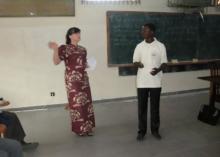