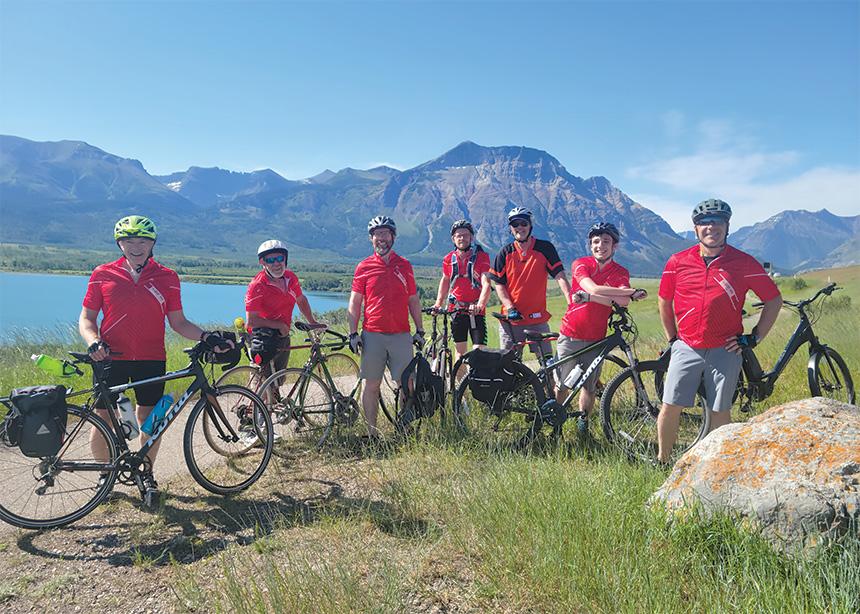 The group that calls itself Wheels of Waterton grew out of Ernie Engbrecht, Ron Esau and Dave Neufeldt’s love for cycling and support for MCC. In 2020, COVID-19 put a stop to the annual relief sales, so MCC encouraged people to organize a GO 100 event to raise support among their peers for MCC projects locally and around the world by doing 100 of their favourite summer activities.

The trio decided to cycle 100 kilometres and found a route that took them from Cardston to Waterton National Park. In 2020, they set a goal of $5000.

On July 15, 2022, the Wheels of Waterton III group grew to include Zacharay Wirzba, Edgar Dueck and Ken Esau. Supporting families and MCC Alberta staffers Alex Heidebrecht and Robin Grimstead met them in Waterton for lunch. By Monday morning they had exceeded their goal of $10,000.

Camp Valaqua’s annual Hike-a-thon has been generating funds for the camp for 20 years. At this year’s event hikers walked a total of eight kilometres on the north end of Jumpingpound Ridge, with a few making the summit of Jumpingpound Mountain at 14 kilometres. The fundraiser also had hikers participating remotely in Edmonton and other parts of southern Alberta. The event, which took place on June 11, has raised over $7,000 so far with more donations continuing to come in. The funds will go towards the camp’s general fund. 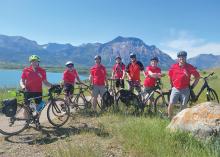 The annual Hike-a-thon for Camp Valaqua involved walking the north end of Jumpingpound Ridge on June 11. (Photo by Jon Olfert)