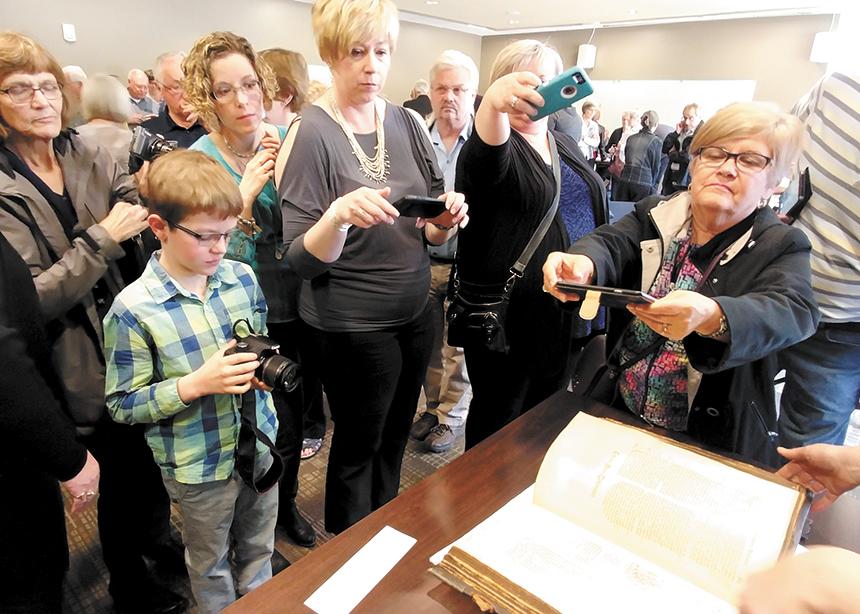 Visitors examine the historic Bender Bible, which was returned to Canada 90 years after it left Ontario. Conrad Grebel University College held a ‘homecoming’ event on May 12, 2018, which included the story of how the Bible originally arrived in Upper Canada in 1832. (Photo by D. Michael Hostetler)

On May 12, some 125 people gathered at Conrad Grebel University College for an unusual homecoming celebration—for a Bible. This large, centuries-old book is a part of Ontario Amish Mennonite history.

The Bender Bible arrived in the wilderness of Upper Canada in 1832 with the Amish Mennonite immigrant family of Jacob and Magdalena Bender, who brought it from their home in central Germany. They and their children settled near what is today New Hamburg, Ont.

Published in Strasbourg, Alsace, in 1744, it is called a Froschauer Bible, named after Christoph Froschauer, the Swiss printer who produced the first complete edition of this translation in 1529. This translation was favoured by reformer Ulrich Zwingli in Zurich and by the early Anabaptists of Switzerland and southern Germany.

The Bender Bible is one of only seven known copies of the Froschauer Bible brought to Upper Canada by Amish Mennonites. It is unique in that it includes extensive, hand-written inscriptions that tell how Jacob Bender came to possess this Bible, where the Benders originated, when the family immigrated to North America, and marriage and birth information about those first generations. As a testament to his faith, Jacob also included a prayer of blessing for each child.

Jacob and Magdalena had eight surviving children, and the Bible was eventually passed on through the generations as a family heirloom and reminder of their faith.

The Bible remained with Jacob’s descendants until 1928, when Harold S. Bender, a prominent Mennonite historian and professor at Goshen (Ind.) College, received it from Noah J. Bender and took it to the Mennonite historical library there. There was no written documentation at the time of its transfer, and the question as to whether the transfer was a loan or a permanent donation to that library arose from the start. The oral tradition of the Ontario Benders through the generations has maintained that it was loaned.

At the homecoming event, Harder-Gissing and Catherine Schlegel gave historical background on the Bible and the Bender family. Schlegel traced the family back to its early Anabaptist origins. Harder-Gissing evoked the sights, smells and sounds of the Bible’s origins and its trip across the sea to a new land. “So, this book is not just an object, it vibrates with layers of history and meaning and possibility,” said Harder-Gissing. “How will you, this Bible’s community, contribute to this ongoing story?”

Representatives of Ivan and Beatrice Bender’s family expressed their thanks, and guests sang a hymn of gratitude and were led in a prayer of thanksgiving for the faith heritage of this unique book.

After the official program, guests examined the Bible and Jacob’s passport. They browsed through genealogy books and made connections with each other, identifying how they were related to their common ancestors, “Jecky and Lena.”

The Bender Bible is available for viewing at the Mennonite Archives of Ontario at Conrad Grebel University College in Waterloo, Ont.

—With files from Fred Lichti. 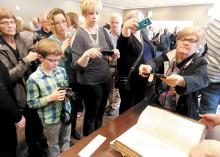 Visitors examine the historic Bender Bible, which was returned to Canada 90 years after it left Ontario. Conrad Grebel University College held a ‘homecoming’ event on May 12, 2018, which included the story of how the Bible originally arrived in Upper Canada in 1832. (Photo by D. Michael Hostetler) 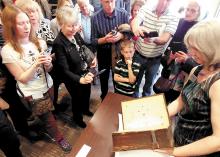 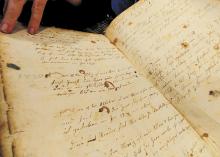 A unique feature of the 274-year-old Bender family Bible are the hand-written inscriptions with family names and birthdates. In 1831, the Bible travelled from southern Germany with Amish Mennonite immigrants Jacob and Magdalena Bender, arriving in Upper Canada in 1832. (Photo by D. Michael Hostetler) 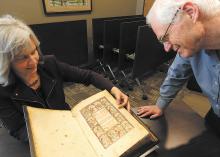 Archivist Laureen Harder-Gissing and historian Fred Lichti examine the the historical Bender Bible, which was recently returned to Canada. It was first brought to Upper Canada in 1832 by Amish Mennonite immigrants Jacob and Magdalena Bender but spent 90 years in an archive in the U.S. (Photo by D. Michael Hostetler) 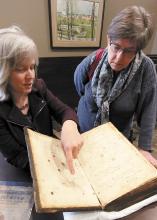 Archivist Laureen Harder-Gissing points out details of the Bender Bible to Virginia Hostetler. The historic Bible was brought to Upper Canada in 1832 by Amish Mennonite immigrants Jacob and Magdalena Bender, Hostetler’s ancestors from six generations back. (Photo by D. Michael Hostetler) 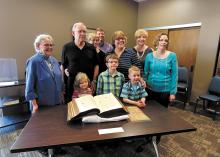 Descendants of Ivan and Beatrice Bender pose with the Bender Bible, a family heirloom, and the passport of their ancestor Jacob Bender, who brought the Bible to Canada in 1832, along with his wife Magdalena and their children. Pictured from left to right, back row: Grace Bender and Daniel Bender; middle row: Geoline Bender, Richard Bender, Mary Ann Bender, Laurel Bender-Lloyd and Sarah Clemmer; and front row: children Oliva Clemmer, Mason Clemmer and Benjamin Bender. (Photo by D. Michael Hostetler) 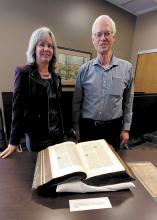 A historic Froschauer Bible, printed in 1744, found its way to the Mennonite Archives of Ontario, thanks to the efforts of archivist Laureen Harder-Gissing and local historians Fred Lichti and Catherine Schlegel (not pictured). It is informally known as the Bender Bible because it was brought to Upper Canada by Amish Mennonite immigrants Jacob and Magdalena Bender, in 1832. (Photo by D. Michael Hostetler)